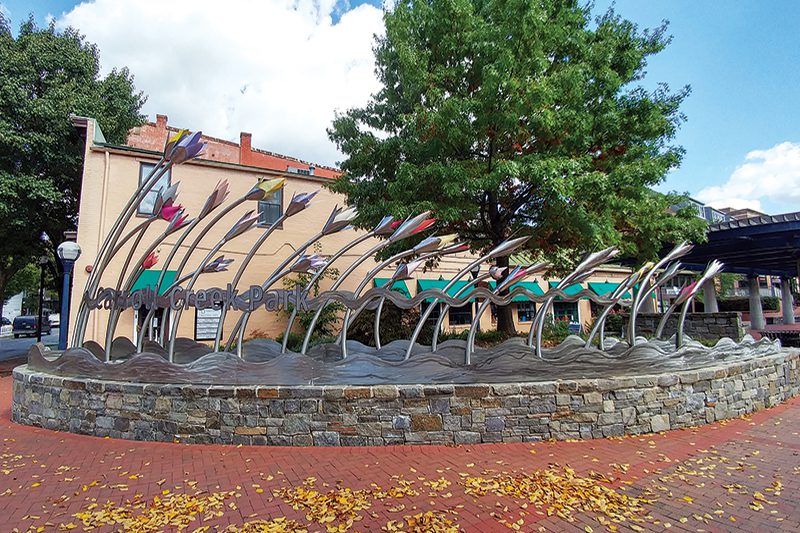 “I gave it a lot of thought, trying to create motion with a static sculpture,” says artist Thomas Sterner. “I wanted the flowers [to appear] as if they were blown by the wind or were seeking the sun.”

“I think it’s welcoming, joyful, colorful,” says Kara Norman, executive director of Downtown Frederick Partnership, the nonprofit that seeks to promote Downtown. The organization was the impetus for the project that not only promotes public art, but also “creates a stronger sense of place” so that people know they are entering Carroll Creek Park.

The partnership’s annual “Bring a Broom Saturday” cleanup of Downtown generates a donation from Comcast Cable Communications. Last year, more than $10,000 was realized and “we were super excited,” Norman says, to tackle the art project. Other contributors were the Ausherman Family Foundation and Transportation Management Services.

In creating the sculpture, Sterner says he had to be mindful of melding modern with a city known for its history. Also, “when I started, it was the gloomy part of the year” as he visited the park. But there’s nothing gloomy about the end result, which pays tribute to the creek’s colorful display of water lilies blooming during summer and early fall.

Sterner says the sculpture isn’t the tallest one he has ever tackled, but it was “the most challenging, has the most components, the most daunting in fabrication and getting it to the site.” He says it took nine days to install and “I had people continually stopping and offering praise, which was really nice.”

A companion piece, smaller in scale, is currently in the works by Sterner for the park on the opposite side of South Market Street.