The Legend of Barbara Fritchie 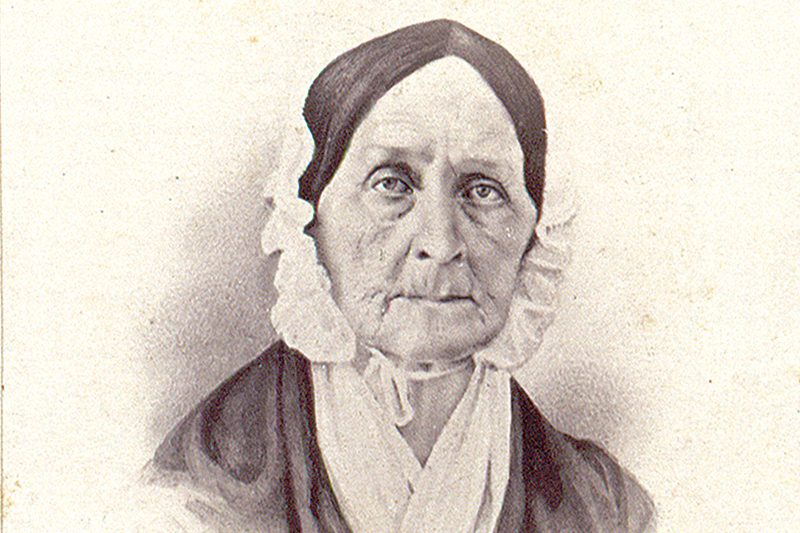 For more than 150 years, the legend of Barbara Fritchie has served as a popular tourism attraction for Frederick. The only question was the truthfulness of her tale.

According to an 1863 poem by John Greenleaf Whittier, The Ballad of Barbara Frietchie, the 92-year-old matron rose from her Frederick sickbed and defiantly waved the America flag at passing Confederate troops under the command of Gen. Stonewall Jackson. She shouted to the soldiers:

“Shoot, if you must, this old gray head, But spare your country’s flag,” she said.

Jackson then ordered his men not to harm Fritchie:

“Who touches a hair of yon gray head, Dies like a dog! March on!” he said.

Whittier had heard the story third hand and obviously used artistic license in crafting his verse. But the poem was a rousing success and people began flocking to Frederick.

There was some confirmation of the events. Dr. Lewis H. Steiner, head of the U.S. Sanitary Commission in Frederick, reported to Washington that an elderly woman berated Southern soldiers passing her house for dragging the Union flag in the dust. He quoted her as saying: “My curses upon you and your officers for degrading your country’s flag.”

Fritchie’s niece was quoted as saying her aunt was bedridden during the Confederate occupation of the city, but came out on her front porch as the Confederates marched by and, standing “feebly” on a cane, waved a small, silk 34-star U.S. flag. The story was passed on to C.S. Ramsburg in Georgetown, who, in turn, repeated it to novelist E.D.E.N. Southworth. Sometime later, Southworth conveyed the tale to her friend Whittier.

In September 1863, Whittier published the 30 couplets of verse, which rang so loud with patriotic fervor that it raised Dame Barbara, Frederick and even Gen. Jackson to glory.

But with the end of hostilities, the authenticity of the poem came into question, and the controversy remains even today because historical records cast great doubt on Whittier’s version of what happened.

Over the years, research by many has laid the heroics of the poem at the feet of Mary Ann Sands Quantrell, who also lived on West Patrick Street not far from the Fritchie home.

In a letter to the editor published in The New York Times in February 1869, she wrote that her flag was waving from a second story window on that day in 1862. Confederate soldiers ripped it down and trampled it before marching on. She said her daughter picked up the tattered flag and held it close to the chest.

As the troops continued filing past, a Confederate general (likely A.P. Hill) rode up in a carriage and admonished the soldier who had torn down the flag, according to Quantrell. She said he politely apologized to her.

There is another recorded incident that may have given rise to the Fritchie legend.

As the Confederate troops continued west from Frederick, they passed through Middletown. Again, a Union flag was seen flowing from a window in the home of the George Crouse family.

Several of the Confederate soldiers dismounted and ran toward the house, demanding that the flag be removed.

Young Nancy Crouse ran to the upstairs window and took the flag down. She draped it around her body and returned to the front door, berating and taunting the soldiers. She was not challenged further. She remains a historic figure in her town, now known as the “Middletown Maid.”

So, the story ends. Or does it? The details in the Whittier poem, though challenged, still ring in history.