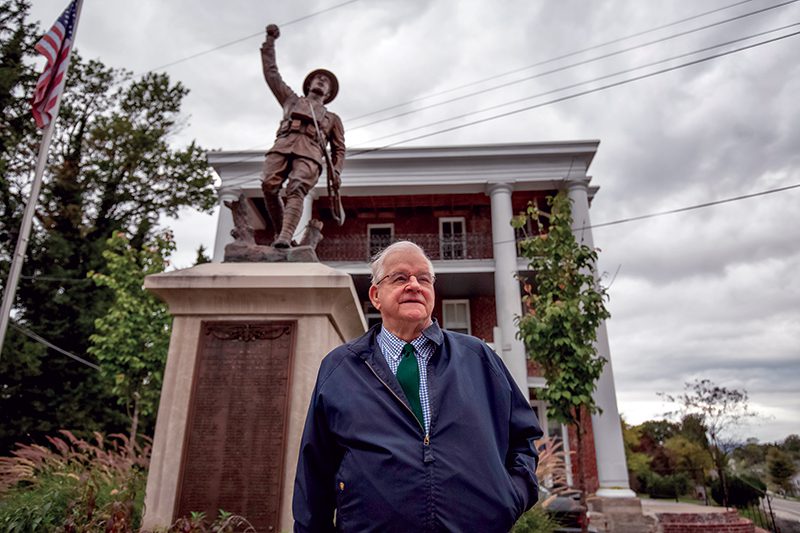 The infantryman appears wide-eyed and alert, staring toward the horizon, mouth agape, as if he’s ready to call out a warning. Standing at the far end of Main Street in Emmitsburg, before a brick apartment house that once was a hotel, this life-sized statue has stood sentry over the community for nearly a century.

In all of Frederick County, it is the only statue of a doughboy, the iconic image of enlisted soldiers in World War I. A plaque attached to the statue’s smooth concrete pedestal lists the names of those who served. Three have stars next to their names, indicating they were killed in the war.

The Emmitsburg doughboy, and other World War I monuments like it, are about to turn 100. Some, like the doughboy and the Victory statue in the City of Frederick, are well cared for; over the years, they’ve been polished and preserved, with the once-bright bronze aging into a dark patina. Attention to other World War I statues across the country has languished, however, with the bronze patina often tarnishing into a shade of green.

“It’s an important part of town,” says Bob Rosensteel, 77, in describing the doughboy’s value to Emmitsburg. “It’s been here all my life.” In 2015, a motorist accidentally rammed the statue with her truck and knocked it off its pedestal. The town spent $40,000 to repair and restore the statue to its bronze glory.

“My involvement originally was in relation to the location of the names of Blacks separated from Whites,” Rosensteel says. At the bottom of the plaque listing all 135 soldiers from the Emmitsburg area who served in the war are three soldiers named separately as “Colored” soldiers. Rosensteel believed all soldiers should have their names listed alphabetically.

“I was working with a handful of Black families in the Emmitsburg area,” he says. “But at the last minute, they decided they wanted it left alone.” Rosensteel has seen identical statues in other communities across the country. “In our travels over the years, we have seen the names of Black soldiers recognized separately. Their place was equal to the Whites, but they were recognized separately from Whites.”

Mike Hillman, editor of Emmitsburg.net, keeps a database of the community’s history. Hillman would like people to pay more attention to the statue and what it represents. “I look at the names of all the people on there, and I know a lot of those names, and they all mean certain things to me,” he says. Many descendants of the soldiers still live in the area today.

“It means so much to our community,” says Emmitsburg Mayor Don Briggs. “When we reset the statue after the accident, we had a man who was there in 1927 when it was first erected. He came up from Baltimore to see it. It’s a wonderful tribute.” Briggs was also in favor of integrating the names of the Black soldiers on the plaque into the list of those who served after the 2015 restoration, but he ultimately decided it was up to the descendants.

One of three soldiers from Emmitsburg killed in the war was Francis X. Elder, who also was the community’s first man to enlist in the war in April 1917. He was killed on Oct. 11, 1918, exactly one month before the war ended.

World War I, also known as the Great War, was supposed to be the last major war. America didn’t enter the war until 1917, three years after it began, but Frederick County sent thousands of soldiers into battle—92 didn’t return when the war ended. “War memorials served a cathartic purpose, allowing families to grieve and remember,” says renowned Frederick County sculptor Toby Mendez. “In time, the memorials serve to recall that historic event and the sacrifice of the citizenry.” 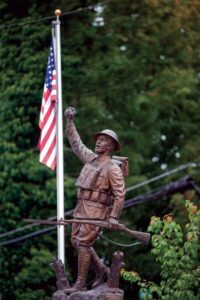 After the war, Americans searched for a way to honor those who fought. Statues began to appear across the landscape. The most prolific designer of doughboy statues was sculptor E.M. Viquesney, of Spencer, Ind., who produced the Emmitsburg statue.

Viquesney, who also carved busts of famous people of his time, including Charles Lindbergh and Knute Rockne, spent much of the 1920s and ’30s touring the country, selling his doughboy statue. There are about 100 full-sized statues in communities across the United States, but the only other known Viquesney doughboy in Maryland is in the lower Eastern Shore town of Crisfield.

The Emmitsburg statue, like all the Viquesney doughboys made before 1934, is not cast bronze. It’s made of 75 pressed sheet bronze parts welded together over an internal frame. Viquesney designed the statue and formed a clay model of it, while Paul Mohmann did the actual sculpting at the Friedley-Voshardt Company in Chicago.

The doughboy’s far-off gaze, facing unseen enemies, gives his expression a memorable look. Dressed from helmet to boots in combat gear, his open mouth indicates he’s calling out to fellow soldiers. A gas mask hangs around his neck, ready to be pulled over his face. Beneath all the gear, it’s clear the soldier is a young man. In World War I, doughboys were all men.

His right hand is upright, his fingers curled around a hand grenade. His left hand carries a rifle with a bayonet attached. Around the soldier’s waist is a belt with pouches to hold ammunition.

The folds of his uniform look almost real. On his feet are rugged trench boots. Leggings connect his boots to his breeches. Suspenders hold up his breeches, and straps from the rucksack loop over the suspenders. His uniform blouse coat buttons to his neck. The doughboy’s torso is twisted ever so slightly to the left, although his stride appears brisk. The toe of his rear boot barely touches the ground.

Les Kopel, a Californian who runs the E.M. Viquesney Doughboy Database project, says that Viquesney doughboy statues outnumber other doughboy likenesses. The project’s Facebook page shares photos of Viquesney doughboys. Some are in excellent condition, while others need some work. Most are sheet bronze, but some are marble or cast zinc.

After the Great War ended, the City of Frederick decided to honor its veterans with a park and a statue. Memorial Grounds Park was established in 1924. The 2-acre park at the intersection of West 2nd and Bentz streets was once the burial grounds for Reformed Dutch Church of Frederick, now Evangelical Reformed Church. The remains of many of those buried there were moved to Mount Olivet Cemetery.

“This location in particular is important,” says Lisa Mroszczyk Murphy, historic preservation planner for the City of Frederick. Some of those buried there were soldiers who had fought in wars ranging from the Revolutionary War to the Mexican-American War. At first, plans were to honor those who fought in World War I with a plaque, but city leaders decided to raise $15,000 to commission a statue they called Victory.

They chose Giuseppe Moretti, a Pittsburgh sculptor who had emigrated from Italy, to design the statue bearing a likeness of the goddess Victoria, according to documents in the Maryland Room of the C. Burr Artz Public Library. The statue was nearly completed when the park hosted an Armistice Day celebration on Nov. 11, 1924. Armistice Day, the predecessor to Veterans Day, was honored in Frederick that year with a parade of 3,000 people, 30 mounted riders and 100 autos. The statue was refurbished and rededicated in 1995, with six World War I veterans still alive to see the ceremony.

Today, however, veterans of the Great War are all gone. So is another memorial that once marked World War I, the Grove of the Golden Stars. This Braddock Heights thicket of Norway maples, planted around 1915, became known as the Grove of the Golden Stars when 92 of them were marked with plaques for each Frederick County soldier who died in the war. But blight and age caught up to the maples. The trees, like the soldiers they honored, are no more.