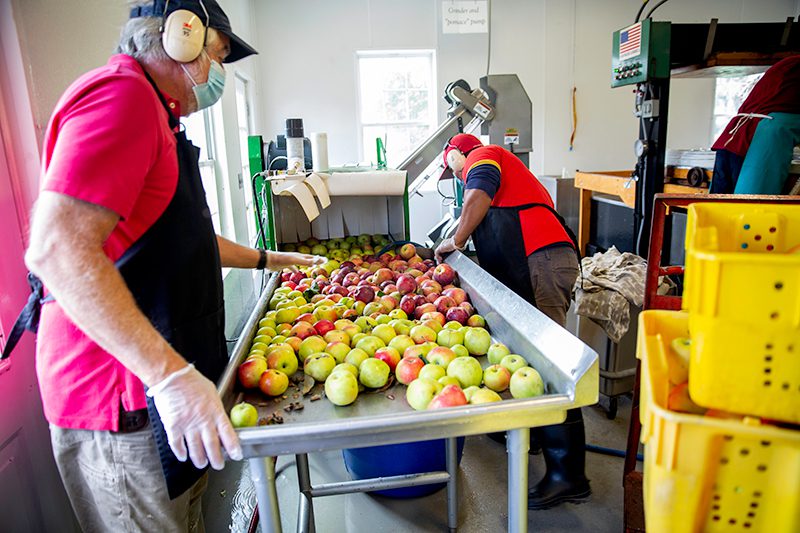 Fermented or Fresh, Apple Cider Is the Ultimate ‘Sip of the Season’

Fall intoxicates the senses as golden sun gilds forests decked in glorious color, like a giant bouquet of flowers. Mornings are brisk and invigorating, giving way to a tease of warmth in afternoon as folks gear up for football and tailgating, harvest canning, soup dinners, and a rollercoaster holiday season. It’s the time of year when attention turns to home and hearth, especially what is on the table. We dream of pumpkin pie loaded with whipped cream, minty hot chocolate, steaming /apple dumplings encasing a swirl of caramel and cinnamon … and cider.

Chilled and crisp or mulled with warm spices, there’s something about a cup of cider that is quintessentially fall. It’s hard not to smile with the first sip.

Longtime cider fans, Rob Miller and his wife, Patty Power, turned their fascination into a thriving business, Distillery Lane Ciderworks. The Millers weren’t farmers, but they wanted to fill a niche with products people would enjoy. They took over a 95-acre farmstead in Jefferson in 2000, near the tree-shrouded ruins of J.D. Ahalt’s Mountain Spring Distillery. They enlisted family to plant the first 1,000 trees over a weekend in the spring of 2001.

Now, the farm boasts nearly 4,000 trees bearing 45 apple varieties, including rare and heritage types like the hulking Brown’s Apple, a British baking favorite. There are rows of Calville Blanc d’hiver, a 17th-century French apple from Normandy, which Miller insists is “the best pastry apple you will ever find.” Those grow alongside super sweet Shizukas, Newtown Pippins, Roxbury Russets and Arkansas Blacks, a Winesap cultivar known for purplish skin and deep aroma. By 2006, there was enough fruit to start making cider.

People usually think of cider as unfiltered apple juice, but it’s a loose definition. At its core, making fresh cider is simple: pick, wash, chop, press and drink. Distillery Lane’s process starts with ripe apples fed through a washer then dropped into a motorized slicer, turning them into a saucy slurry of skin, pulp and seeds called “pomace.” The pomace is pumped onto cloths which are folded and stacked. A hydraulic lift presses the cloth tower against a metal plate, draining liquid into a 50-gallon tank below. Squeezing takes about 15 minutes. Then the juice is treated with a UV processor and channeled into fermentation tanks or bottled for immediate sale.

The farm is open weekends through mid-December. And, while guests can’t pick their own fruit or sample the hard ciders this year due to current health regulations, the business welcomes masked guests for direct sales, with displays and information about current harvests, whimsical folk art, occasional food trucks and a half-mile, self-guided walking tour.

Hard cider accounts for about 50 percent of Distillery Lane’s current business. It also supplies ingredients and custom creations to regional restaurants and other beverage makers, including Flying Dog Brewery, Dragon Distillery and Middletown’s Orchid Cellar Meadery and Winery. A peek into their small fermentation area reveals a few classic oak barrels, which are exchanged among partners to engineer unique flavor compositions. Even George Washington’s venerable Mount Vernon uses Distillery Lane cider to craft small batches of brandy at its working distillery. The Rio cider picks up notes of vanilla while aging in rye whiskey barrels from Baltimore’s Sagamore Distillery. Bottles of sparkling Woodberry incorporate native Aronia (chokeberries) grown on site for rosy color and earthy flavor. The “liquid gold” dessert cider, La Mela Della Notte, is a blended house-made brandy with fizzy Kingston Black apple juice, inspired by a midnight foray into the orchard. Miller says, “It’s the perfect thing to sip on a winter’s night when you have your feet up and nowhere to go.”

North to Frederick, the iconic McCutcheon’s Apple Products’ sign marks the factory and outlet store on South Wisner Street. McCutcheon’s doesn’t make the hard stuff, but Fredericktonians have enjoyed McCutcheon’s hearty, fresh cider since 1938. William McCutcheon started the company when he was 80, enlisting his son and daughter-in-law to process fruit into juice and apple butter for local farmers. The company now makes its own brand of products and ships to fans nationwide, but human resources/marketing manager Meghan Custer (daughter of vice president Bob McCutcheon and a fifth-generation member) says it is still very much a family business. “You might see my aunt in the wholesale office or my brother working the cider line.”

McCutcheon’s uses apples from a 50-mile radius around Frederick, transforming 11 pounds of fruit into a gallon of cider. In season, it will process several truckloads per week, yielding about 1,000 gallons each. Since apples keep well when chilled, raw materials are sometimes available through spring. And this version is pasteurized and hot-packed for a vacuum seal, further extending its shelf-life. Patrons can find a substantial selection of products on site, including apple cider vinegar with 5 percent minimum acidity and the beneficial bacteria known as the “mother.” The expanded product line includes cider flavored with natural cherry, peach and grape in a range of sizes, plus unique jams, jellies and fruit butters, jarred soups, salsa, pickles and salad dressings, available year-round.

Catoctin Mountain Orchard in Thurmont is another hotspot for a cider and doughnut fix. The prominent roadside market is a magnet for locals and travelers alike. “Pick-your-own” opportunities were limited this year, but the shop stocks a variety of seasonal fruits and veggies from May through January. Their pies, made off-site and finished in the market, are a must-have for many holiday gatherings and they sell thousands of apple dumplings. (Pies are first-come, first-served due to increased demand.) This time of year, shelves may hold Cameo and Fuji apples along with cabbage, kale, squash and sweet potatoes, even the orchard’s own crunchy Autumn Gala apple, aka “Harry Black Gala,” named in honor of the family’s founding patriarch. It was discovered here on a Gala tree limb more than 20 years ago.

Apple connoisseur Christopher Black is Harry’s grandson. He says when it comes to cider, the apples “don’t have to be the biggest or the prettiest, just the most flavorful.” He echoes Miller and Custer in explaining that fresh cider isn’t a static product. Flavor changes from batch to batch, depending on what’s ripe and available. There may be six varieties in the mix, like York, Honey Crisp or Golden Delicious, each with its own acidity, density and sugar content. Black says, “I really like cider [made] from October to November because you get more medium-tart apples. To me, that adds body and flavor.” Most of the orchard’s bounty goes directly to consumers, but they send apples to Kimes Cider Mill in Bendersville, Pa., too. Black notes, given a little room for expansion, cider does well in a freezer. He wishes patrons farewell with a jovial, “Have a fruitful day!”

Both Catoctin Mountain Orchard and McCutcheon’s web sites include seasonal recipes to inspire enjoyment, such as cider-brined pork, apple mimosas or festive Wassail. Custer’s elevated cocktail idea pairs cherry-apple cider with mulling spices and a splash of champagne. It proves the point: Any time your cup is full of cider is reason enough to celebrate.