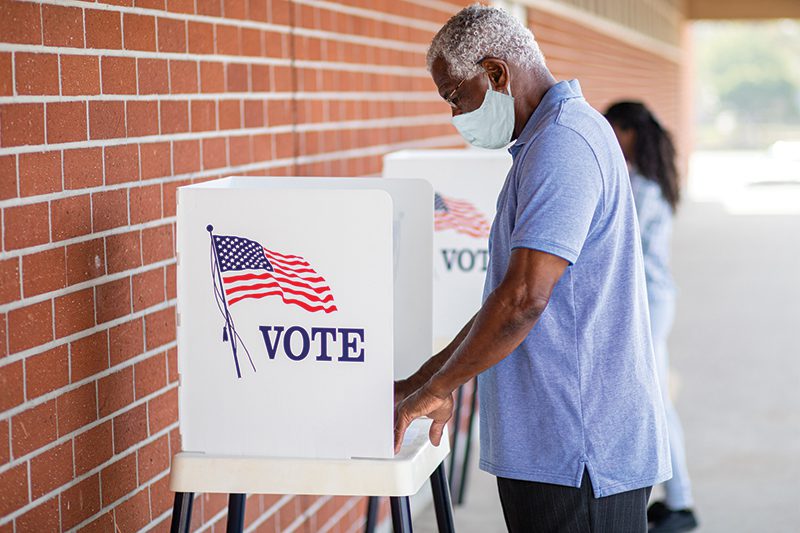 Can an election unlike any other balance safety with security?

This year’s Nov. 3 elections come at a distinct and deeply polarizing chapter in American history. A politicized pandemic and a sharply divided electorate have both heightened the stakes and muddied the voting process.

As local elections officials hustle to adapt to shifting state directives, a shrinking pool of election judges, and mandated safety protocols, voters are deciding how best to ensure their votes count. Some voters are determined not to be intimidated by the COVID-19 pandemic and will vote in person on Election Day.

Eric Beasley, active in the local Republican party, is among that group. “COVID has been politicized from the beginning,” he says, adding that he believes statistics have been “intentionally skewed to fit an agenda.” He and his family are low risk, he maintains, and his decision is “my body, my choice.”

Others are unwilling to risk COVID-19 infection and will vote by mail. Another group is intent on avoiding both the pandemic and mail voting and will personally deliver their ballots to designated drop boxes.

“I will be filling out my ballot and dropping it off at a ballot drop box in Frederick County. I voted the same way during the primary election,” says Dawn Onley, president, Onley Communications. “I don’t know what the impact of the coronavirus will be on Nov. 3, but I decided against standing in what could be a long line to vote because of COVID-19. And, with all that has been happening with the Postal Service—delays in mail delivery, the USPS decommissioning a sizable percentage of its sorting machines, etc.—coupled with what will likely be an unprecedented volume of election mail, I think the drop box is the best option for me.”

During the June 2 primary election in Maryland, every registered voter received a ballot in the mail. Of the 180,000 sent out, only a third were returned. No early voting was available and in Frederick County just two polling centers were open on June 2.

For the general election, Susan Reeder Jesse, a Democrat who has run for public office in Frederick County, says she and her husband will be casting their ballots by mail. “We did it for the primary and it was easy, quick and efficient. If it is good enough for our president to vote by mail, it’s good enough for me.”

Although the primary process was relatively smooth, Gov. Larry Hogan decided in July that registered voters would be sent an application for a ballot instead of an actual ballot. The state Board of Elections has requested an additional $20 million to cover the added costs of drop boxes, security, staffing, mailing, printing and voting and safety equipment.

Ballot applications went out Aug. 24, and the deadline to apply for an application is Oct. 20. Mail-in ballots must be postmarked by Nov. 3 or dropped in designated boxes by Nov. 3 at 8 p.m.

Meanwhile, the relationship between the state and local boards of elections and the governor is growing strained; Hogan has become particularly agitated over what he sees as a lack of response from the state Board of Elections. For example, he says in several news reports that he wanted ballot applications mailed weeks earlier. Elections directors insist they are working as quickly as they can amid state-mandated deadlines and process changes. They have asked the state for help processing mail-in requests to avoid backups and delays in sending out applications and ballots.

The state is also asking local boards to begin reviewing, tabulating and verifying votes 30 days early because of the anticipated flood of mail-in votes that need to be counted and verified.

Election judges, many of whom are retired and often elderly, are being asked to assume more responsibilities at greater risk to their health and wellbeing. Some have chosen to bow out entirely, creating an urgent need for new judges.

“Every single election worker in this country will be at risk.”

Election judges usually aren’t in it for the money, but they will be receiving an increase of $50 this year, with chief judges receiving $225 and other judges $175. They also receive $25 for training.

“I worry about bringing hundreds of people into our office for trainings,” Harvey says. “We will query those in for training and do temperature checks. Everyone will be masked, and we will be using hand sanitizer before and after each session.”

Despite the emphasis on safety protocols, Harvey emphasizes that “every single election worker in this country will be at risk” throughout the voting cycle.

Donna Buck has been an election judge since 2008 and believes that ensuring everyone is able to vote is her way of giving back to the community. But she is passing on working this election because she has a seriously disabled daughter with respiratory issues.

After the primary election, Buck read several accounts of election judges sickened with COVID-19 and knew then that she couldn’t risk her daughter’s safety. “I would love to serve, but I just cannot do it this time,” Buck says.

Judges will work early voting, which runs from Oct. 26 to Nov. 2. The early voting schedule, originally scheduled for Oct. 22 to Oct. 29, was changed in August by the state. The last-minute change sent local election boards scrambling to ensure available locations and staffing.

Registered voters can vote at any of the designated polling places in the county, which will include all county high schools except for Brunswick. (The newer Brunswick Middle School will serve as a voting center instead.) For early voting and election day voting locations and times, drop box locations, and more information, visit frederickcountymd.gov/elections.

Eight drop boxes will be installed in early October. Those boxes will be emptied daily by two staff members. The county Board of Elections is sending out sample ballots and other pertinent information in mailings and on social media platforms via video public service announcements.

Voters who choose the in-person option will be required to wear masks and stay six feet apart, which will be marked off with tape. Some judges will be appointed as line managers, and masks, gloves and hand sanitizer will be available. Staff will be protected by plexiglass shields and will also be wearing masks and gloves.

Pens and booths will be sanitized after each use. These safety measures were in place for the June 2 primary election, and chief judge Jim Gugel says he felt comfortable with the precautions. Gugel, who retired as Frederick County planning director last year, will be working the general election. He has served as an election judge since 1990. He sees it as a civic duty, even more this year.

“I don’t have any reservations about how voting is conducted in Frederick County.”

Harvey says there were only a few problems with the protocols on June 2, but those who refused to wear masks were offered the option of an outside voting booth. One man insisted on coming inside at the Urbana Library and raised “a huge stink,” but he was allowed to vote in a corner booth and encouraged to leave as quickly as possible.

But with the anticipated crowds for the general election, chief judge Kelli LeClerc says there are plenty of unknowns. She’s concerned about those who eschew the safety protocols or will be overwhelmed with lines, but adds that staff will not “argue with people, but try to inform them.”

The logistics of spacing and parking, staffing and protocols are a massive undertaking, one LeClerc doesn’t believe many people understand. Wearing masks for nine or more hours a day is uncomfortable, and the entire voting cycle is exhausting for judges and staff. She also assists with the formal verification process, known as canvassing, and that can take between two and three weeks, she says.

But she would recommend people become involved in election judging, even if for just one or two voting cycles. “Being an election judge is a great way to ensure that our democratic process works,” LeClerc says. “Anyone who wishes to vote can vote. You are part of a process with a lot of checks and balances to make sure every vote is cast and properly tabulated. To me, that’s rewarding.”

LeClerc also fields questions and concerns from voters on social media, and admits she’s been taken aback by concerns about fraudulent voting and insecurity about mail-in voting, given the safety procedures and redundancies in the system. She encourages voters who recently moved to report their new address to the county Board of Elections, and those who have lost a loved one to ask to have that person removed from voting rolls.

Those involved in elections, from staff to volunteers, credit Harvey with the dedication, expertise and experience to get the job done, regardless of challenges. Green, who was part of the board that hired Harvey in 2002, praised his work, and says he “eats and sleeps elections and voting.”

Jill King, active in the local Republican party and a one-time election judge, participated in Election Integrity Maryland, a project that reviewed voter registrations several years ago. “I don’t have any reservations about how voting is conducted in Frederick County. Stuart is on top of things here,” she says.

Harvey is anticipating record voter turnout next month as voters seem more motivated than ever to cast their ballots.

Onley and other voters understand and echo the push to vote, especially now. “I know we’ve all heard this before, but in my lifetime, it’s never rung truer: It is absolutely crucial that we vote during this presidential election,” she says. “If we value our nation and care about the direction it is headed, we need to vote for congressional and presidential leaders like our lives depend on it—because they do.”