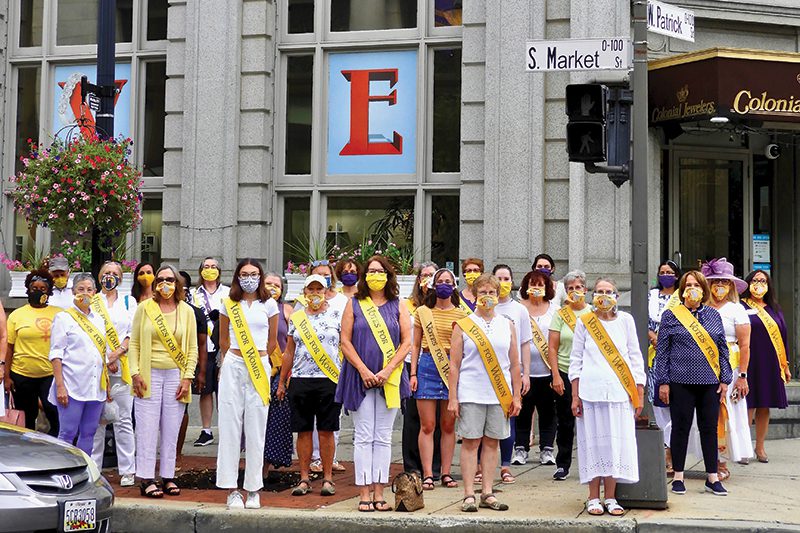 As this year’s presidential election attracts all the attention, it’s worth noting that 100 years ago, women in the United States were able to vote for the first time. The 19th Amendment—approved by Congress and ratified by three-fourths of the states—was added to the U.S. Constitution on Aug. 26, 1920.

To celebrate the amendment’s anniversary, about a dozen Frederick County women, called Frederick Votes Women, started meeting last year to plan a parade, museum exhibit and a play, along with other activities. But along came COVID-19.

“Once we realized that public activities would not be possible, we started to promote virtual activities,” says state Del. Karen Lewis Young, a member of the planning group. “As we researched virtual celebrations throughout the state, we connected with a group called WED2020 (Women’s Equality Day). Frederick recently became the ninth county to join the group, which is now called WED 2020-2021. The decision was made to extend the celebration for an entire year.”

Heritage Frederick, 24 E. Church St., currently contains an exhibit recounting notable women’s history sites and events in Frederick. “Our goal is to both celebrate the brave women who worked to pass the 19th Amendment as well as to educate others about their struggles,” Lewis Young says.

“The Maryland General Assembly had several activities planned, as well. I co-chaired that effort with [Del.] Brooke Lierman from Baltimore. Our first event was in late January and we had several well-known Maryland historians speak with us,” she adds. The 1920 state legislature rejected the amendment because the majority thought it trampled states’ rights; it wasn’t ratified until 1941.

At the January event, “all the female members wore sashes that said, ‘Votes for Women.’ These were a reproduction of the actual sashes that women wore during the suffrage movement. The sashes were created by Joannie Jenkins, a Frederick seamstress” who “recreated it as authentically as possible,” Lewis Young says.

“We had planned to have the entire women’s caucus walk out of both chambers towards the end of March. We were going to wear our sashes again and remind everyone what both chambers would look like today without women,” she says. “That did not happen, but I plan on discussing the possibility of doing it in 2021 with the Speaker [of the House of Delegates].”