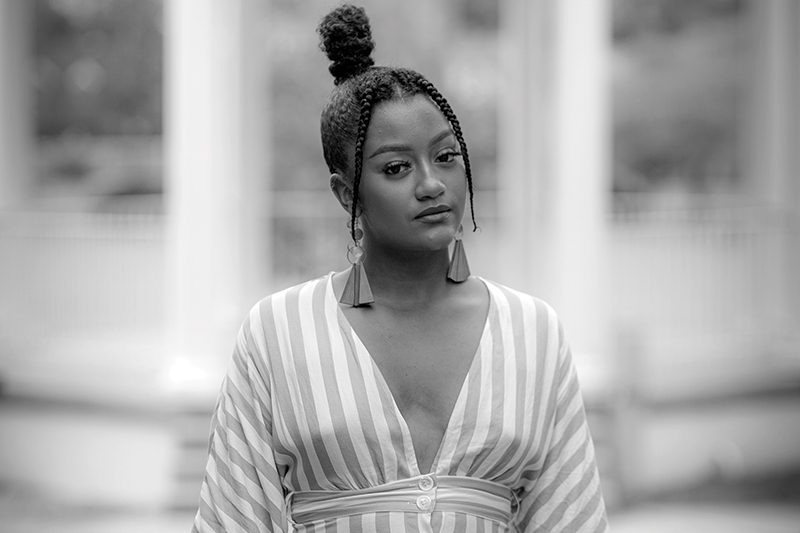 On Friday, June 5, an estimated 7,000 people marched in Downtown Frederick in demonstration against police brutality, initiated by the murder of George Floyd who was suffocated by a Minneapolis officer 11 days earlier. March for Justice, believed to be the largest group protest in Frederick history, was organized by five Black citizens—all in their teens and 20s. One organizer, 23-year-old Alijah Gee, recalls the event’s meteoric development and the overwhelming show of solidarity by the Frederick community.

Scott: Who initiated the planning for the March for Justice and how did you get involved?

Alijah: Gabrael Moore, Isaiah Spencer and Amiyah Spencer initiated the idea of a march in Downtown Frederick following the murder of George Floyd. I learned about the event on social media. I personally spoke with Gabe, who then encouraged my involvement. From these conversations, Frederick’s March for Justice was born. I brought in Akiyyah Billups, who had previous event experience and helped with additional needed organization. Personally, I got involved because I was outraged by George Floyd’s murder and needed my voice to be heard. I had a purpose!

Scott: Very quickly, though, you assumed more of a leadership role.

Alijah: Because I am a few years older than Amiyah, Gabe and Isaiah, I may have assumed a leadership role, but overall we all took on important roles that were key to the success of the event. By the time I got involved there was only one week to finalize the planning. So each and every one of us had our roles.

Scott: At what point did it become obvious that it was going to be a much more widely attended event? And when did the group coordinate the effort with city officials and police? Initially, didn’t organizers expect a much smaller turnout?

Alijah: Absolutely! While we expected a good turnout, we didn’t expect 7,000 people to come together for this cause. We continued to look at our Facebook event page numbers in the days before the event and saw that the number of people “planning to attend” kept jumping by the hundreds each day. We knew we needed to sit down with city officials and the police to discuss safety concerns.

Scott: When, on the day of the event, a torrential rainstorm developed mid-afternoon and continued for several hours, how did you and your fellow organizers think it would affect the march?

Alijah: The storm intensified our commitment to march. However, when thunder and lightning became a major issue, our thoughts turned to the safety of all the participants. We updated our social media pages frequently and eventually attempted to just push the start time out an hour to 6 p.m.—but it was too late. Large numbers of people were already arriving.

Scott: Leaving Mullinex Park and approaching Baker Park, were you and your colleagues surprised by the numbers in attendance—and by the diversity of those in attendance?

Alijah: We were in shock as we watched the bandshell and all the surrounding park areas fill with people of different ethnicities, religions and nationalities. Everyone was drenched from the rain, shoes were soaked, it was insane. We could not believe so many people would come to address the issue of police brutality.

Scott: What were the most emotionally moving moments of the proceedings that took place at Baker Park?

Alijah: When everyone started to fill the bandshell, we played Rise Up by Andra Day. The timing was perfect. All of the organizers and many participants broke out in tears because the event stirred so many emotions.

Scott: Do you believe that the local event, which included the march down Market Street, as well as the hundreds of other events happening around the country will help to end racial discrimination and violence?

Alijah: I do believe that all the events happening will help make a change. So far, it has. Although they are baby steps, some more states are banning chokeholds by police forces. Locally, a Mobile Crisis Unit has been established. The unit is vital to change because instead of police officers handling citizens who are having major mental health issues, the Mobile Crisis Unit (professionals with intervention skills) will be dispatched Police officers are not trained to respond to someone who is having a mental break-down—in some cases it can just escalate the situation. Members of the unit will be equipped to deal with individuals in crisis.

Scott: On a completely different note, how do you feel about Joe Biden’s selection of Kamala Harris as vice presidential nominee?

Alijah: At the end of the day, Kamala Harris is a Black woman. I will support another Black woman before I criticize her for mis-takes she may have made in her past. We need more influential people of color higher up—and this is a great opportunity.

Alijah Gee lives in Frederick and recently obtained a communications degree from Bowie State University. She hopes to work within the field of organizational communications. Scott Grove is a marketing consultant and owner of Grove Public Relations, LLC, an advertising and marketing firm he founded in 1986. A former reporter, Grove is a lifelong student of history and co-owner of iTour, creator of the Frederick Maryland Walking Tour, produced both as a mobile app and a DVD. For more information, visit itourfrederick.com or grovepr.com.