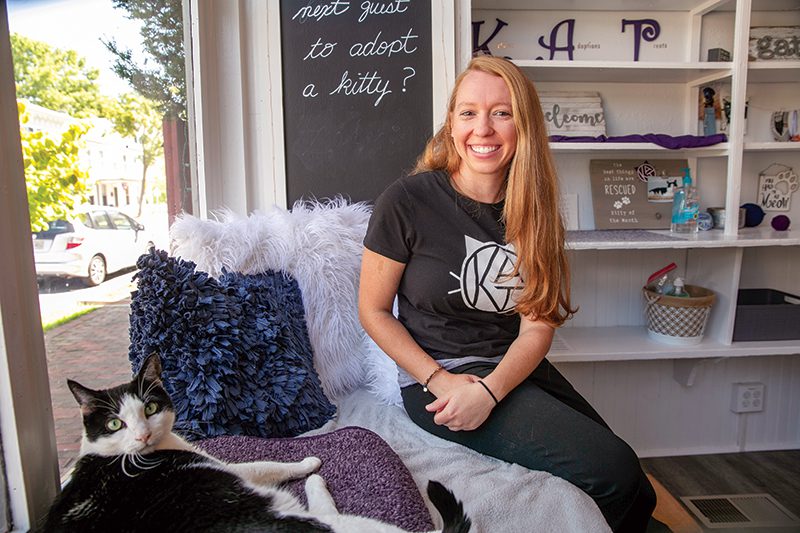 The Maestri family had come to K.A.T. Café in New Market to perhaps sample the vegan fare and maybe, just maybe, add a new member to their family as well.

“We are thinking about adopting a cat,” says John Maestri, visiting the cafe with his wife, Anna, and their sons, three-year-old Michael and eight-month-old Vincent. But first they wanted to take a test drive of sorts. “We wanted to see how the children were with the cats, and I have family members with cat allergies and so we wanted to check that out,” he says.

At the K.A.T. Café—which stands for kittens, adoptions and treats—cats roam freely about, interacting with visitors in an open and relaxed setting. “We are an adoption center first,” says Diane Foland, owner, “and a café second.”

K.A.T. works in conjunction with the Frederick County Animal Control and Adoption Center, which provides cats to the café in the hopes of them getting adopted. There can be as many as 15 cats taking up residence in the historic building that was once a general store and still bears the original sign over the door.

Since opening last November, and despite being closed for several months during the COVID pandemic, Foland had placed 54 cats into new homes by mid-summer. And maybe a 55th was in the works as Michael Maestri excitedly made a beeline towards the cat toy box. Grabbing a toy mouse to share with a cat, he went off in search of a feline.

“This is the first time we’ve brought them around cats,” John Maestri says. “We’ve taken them to petting zoos and places like that, but this is their first experience with cats.”

While Michael attempted to tempt the cats with toys, Vincent found his own friend in a lanky orange cat named Zip. As Vincent sat contently in his carrier seat, Zip would approach him, gently give him a sniff and slowly back away before returning. Vincent took it all in good stride.

“At the café, we have a nice environment with couches and chairs,” says Kate Wells, a café staff member. “It is a more homelike environment. You get a better sense of the cat’s personality and how they connect with you.”

Linda Shea, director of the Frederick County Animal Control and Adoption Center, sees the value in that. “I’ve had people ask me to go back and pick an animal for them,” Shea says of the shelter. “They can’t go back there, they say, because the animals being confined makes them sad.”

Not an issue at K.A.T. Café. “I think the K.A.T. Café does offer a more family feel,” says Shea. “There’s a bean bag on the floor where I’ve seen kids cuddle up with a cat. There are boxes of cat toys. It is very homey. We try at the shelter, but the shelter will never be a home.” She adds, “I love this idea.”

Prior to the pandemic, as many as 15 guests at a time could pay $15 for an hour and ten minutes of time with the cats. The fee goes toward the upkeep and care of the cats. Since reopening in mid-July, that number has been cut to five visitors at a time and reservations are required. There are other safety precautions in place as well. Masks are required and the café is thoroughly sanitized, says Foland, from tabletops to cat toys.

K.A.T. hasn’t just embraced cleanliness as a result of the pandemic, however. It was taking care of business long before then. The litter boxes, for example, are placed strategically throughout the café. “We hide them very well,” says Foland. “We have people come in and ask, ‘There are 15 litter boxes in here?’”

Even the food, which can be enjoyed there, is outsourced and is prepared offsite. Foland has partnered with local food establishments Sage Cakery, Daddy Boy Bakes, Hippy Chick Hummus and Superfoods Café to provide vegan menu items.

Unfortunately, the menu has been affected by the pandemic, as well. Previously, says Foland, visitors could order vegan salads and wraps. “The problem with vegan food is that it is highly perishable,” says Foland. With the limitation on visitors, salads and wraps have been temporarily scratched. Instead, the revised menu offers vegan snacks and treats such as hummus and pita chips, cookies and fudge bites—items with longer shelf lives.

Foland, however, wants it made perfectly clear that the cats are not on a vegan diet. And those visiting are not permitted to feed the cats. Or, to bring their own cats to play due to safety concerns.

An animal rights advocate, Foland was inspired to open her establishment after passing by a similar cat café in Georgetown and becoming suspicious of its intentions. “My animal rights radar was up,” she says.

Upon visiting the café, however, she was delighted with what she found. “I fell in love with the idea,” she says. And she decided to try to open a café of her own. Surprisingly enough, Foland does not own a cat herself. “My partner is allergic,” she says. But she has a love for all animals and saw K.A.T. Café as a way to help the feline population. And promote the idea of veganism. “It was a way to combine two of my interests into one place,” she says.

On the day the café opened “we had 80 reservations,” says Foland.

Those visiting the café, which is decorated in all things cat by Foland’s mother, Kat, for whom the café is named, will also find merchandise and artwork and crafts by local artisans for sale. There are T-shirts that say, “I’m here to pet all the cats,” cat/mouse/yarn earrings and painted rocks featuring felines, among other items.

But, of course, Foland wants the real draw to be the cats with the hope of finding them homes.

The Garms family had lost their beloved cat Sparky after 10 good years together. “We were devastated,” says Jennifer Garms. Not long after losing Sparky, Garms and her two daughters decided to visit the newly opened K.A.T. Café. “We were missing Sparky and just wanted to go in and be surrounded by some cat love,’” says Garms.

That’s where they met Pez.

“He and my daughter Taylor had this instant connection,” she says.

What turned into a visit to help them with their grief resulted in a new cat. Now Pez is getting a sister named Melusi. On the very first day the café reopened the Garms family returned and began the process of taking her home, too. All adoptions are processed through Frederick County Animal Control.

“It’s wonderful what they are doing,” Garms says of the café.

As the Garms family’s story suggests, the café offers an opportunity for new friendships to be made—be them for an hour or a lifetime. Michael and Vincent Maestri had certainly made a new friend that day. While the Maestri family continued their visit, Zip had moved on from investigating Vincent to engaging with Michael. As the cat and the boy played on

the floor, Anna Maestri was asked if the family might indeed consider adding a new member to the family.

“If we find the right cat, sure,” she said, smiling as she watched her son and Zip play.