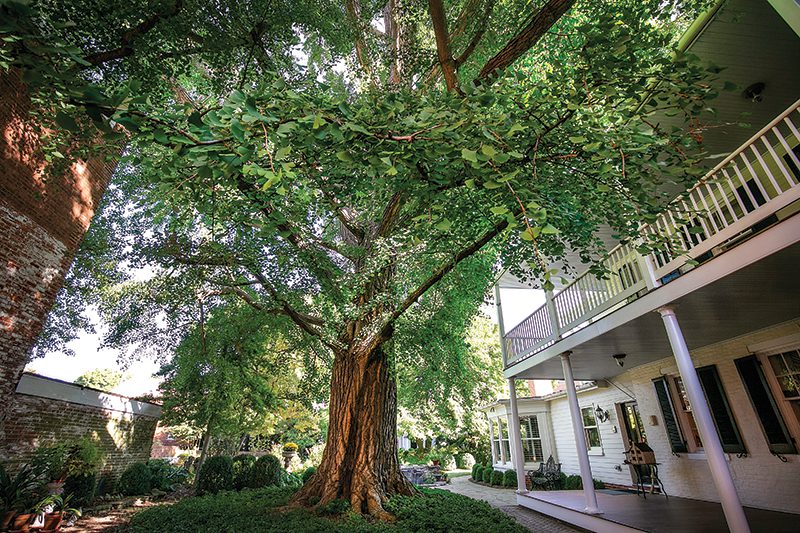 Nestled in the garden of a Downtown Frederick home on West 2nd Street is a large, old tree that often attracts stares from passersby for its unique appearance, including fan-shaped leaves that transform every October from a brilliant green hue to a shade that resembles a perfect golden delicious apple.

But get in your peek fast (and maybe take some photos while you are at it) because it doesn’t last. Those who wait too long risk missing the annual show and are left staring at bare limbs skirted by piles of yellow leaves.

It is actually one of the largest ginkgo trees in the United States. In fact, it was a national champion tree in 1983. At the time, the home was owned by Julia Etchison-Hanna and she entered it for the champion status. Etchison-Hanna put the plaque noting the tree’s status prominently on the garden wall along the home’s 2nd Street frontage. Carol and J.B. Powell, current owners and caretakers of the ginkgo, invite the public to stop at the gate and take in the beauty of the tree. “The best time to see it is in the fall when the leaves are all yellow,” she says.

Yes, this is the month when the ginkgo stars, but it really is lovely most of the year.

Ginkgo biloba, also called the maidenhair tree, has remained mostly unchanged from its beginning hundreds of millions of years ago. Likely feeding dinosaurs, the gingko remains hearty and sturdy still today. Parking areas, church yards and even tiny downtown gardens are home to the ginkgo, but it wasn’t always so.

Once thought extinct, ginkgoes were rediscovered in 1691 at an Asian monastery where they had been cultivated by Buddhist monks. (Despite the tree having existed for millions of years, its cultivation has only been happening for about 1,000 years.) Evidence of the ginkgo can be found in leaf fossils and seeds that show that the tree was once widespread, even in parts of North America. When the continents separated, the ginkgo didn’t stay in North America, but spread into Asia.

One of the most prominent features of the ginkgo is its notorious fruit, which can only be produced by the female variety. The most generous description of the fruit is that it smells like rancid butter; the harsher version is it smells like vomit and sewage. And that’s not the worst of it because the stinky fruit can also create a hazard when they fall to the ground, making sidewalks and paving stones slick with a gooey mess. However distasteful today, the theory is that the stinky fruit was attractive to the dinosaurs and mammals that have long since become extinct. But because of the fruit’s smell and the walking obstacles it creates, mostly males are planted in public areas today.

Much more appealing are the gingko’s trademark fan-shaped leaves. Found on wallpaper, fabrics, wooden trivets and even shower curtains, the leaves have been the inspiration for much art. But they also serve a practical purpose; they aren’t particularly flavorful for pests.

In fact, long since died out are the pest, disease and plant interactions around the ginkgo. There are only a few insects that use the tree for food or shelter. Contrast that with the more than 500 moths and butterflies that use oaks for food or shelter, and that doesn’t include other insect groups like bees and wasps, flies, or beetles, not to mention the birds and other wildlife that feed on those insects. Most plants that are native to an environment serve multiple species as food or shelter, or both, and usually are part of a plant community as well. Non-native trees often become bullies, swallowing up habitat reserved for native plants because they have no natural pests or diseases to keep them in check. Ginkgoes are technically native since they appear in North American fossils, but the ecology changed to make up for the tree’s loss when the continents shifted. As a result, there are now very few pests that feed on ginkgoes and the trees serve a limited ecological purpose in North America. But existing outside the ecological web also means that it is one of the hardiest trees around, nor does it bully native plants.

The Powells’ male ginkgo was likely planted in the 1700s, when the tree was just being reintroduced to other continents by adventurous botanists and plant collectors who traveled the world looking for unique flora to add to their home gardens and arboreta. It grew to fill in the space and became a dominant canopy tree on that block. While it is an old tree, it shows few signs of stress or disease. Dan Yates, an arborist with Bartlett Tree Experts, has been caring for the ginkgo since 2006. In addition to cabling, the tree regularly gets pruned, has specialized irrigation, is on a nutrient management program and has lightning protection. “The tree lost its champion status when it got struck by lightning [prior to 2006]. It lost about 20 to 30 feet off the top,” says Yates.

In addition, the Powells are meticulous about keeping the soil around the roots free of competing vegetation. When they wanted to build an addition to their home, they worked with Yates and the designer to build on piers and avoid damaging the root system of the giant. To do that, Yates and crew had to excavate the root system to determine its extent and where support for the new building might go. “Some of those roots are 18 inches in diameter,” says Yates. An intricate irrigation system had to be installed to manage the water to the tree since its roots would no longer have access to natural rainfall.

All this work seems to have paid off. Ginkgo trees can live for more than 1,000 years. Like the elderly ginkgoes in monasteries cared for by monks, the Powell’s tree shows every indication that it has a long, full life ahead. Though its champion status may be lost, holding that title for even a short time is a feat. And losing 20 to 30 feet off the crown and recovering is a testament to the hardiness of the ginkgo on 2nd Street. The Powells, along with Yates, have shown that caring for our mature canopy trees definitely has its rewards. “I hope this tree stands for many generations to come,” says Carol Powell.

Be sure to venture down to see the ginkgo in its full fall color, usually sometime in October. The leaves turn a brilliant yellow, giving it an ethereal glow. Then, during a strong wind, the leaves will all fall off at the same time, leaving a yellow halo at the base. It is a stunning show and happens in a short window of time, so check back with the tree often to catch it.