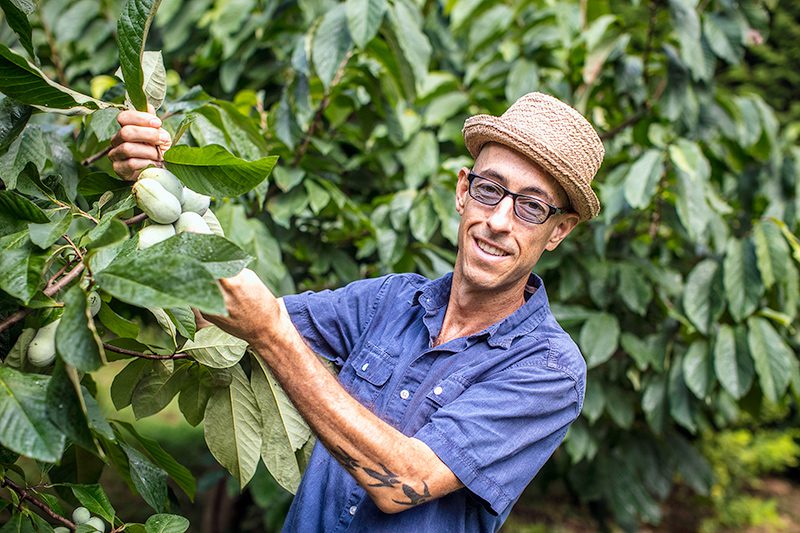 Thousands of years ago, native Americans on the eastern side of the continent recognized what would much later become known as the Appalachian banana, or pawpaw, as one of the region’s most important fruit-bearing trees. Pawpaw bears the largest fruit of any native tree in North America and resembles a custardy mango/banana. That is to say that, when ripe, the fruit is sweet and melty in texture.

In its native habitat, the pawpaw prefers to grow in moist lowland and floodplain soils in the shade of much larger trees. Nestled in the shade of giants such as American sycamores and eastern cottonwoods, pawpaws grow in groves or colonies on impossibly spindly stems supporting huge tropical leaves and a few clusters of fruit. When planted in the sun, pawpaws bulk up their stems, bush out and easily produce double the amount of fruit. It’s clear that pawpaws are just as happy out of the sun as in it and the real key is moist soils and friends.

Pawpaws have become one of the most popular foraged fruits. With so many foragers out and about, pawpaw fruits can be difficult to find. Foragers rarely give away their hunting spots so when hunters stumble upon a pawpaw patch, it’s pure magic. They grow along the rivers and creeks and have also become a reforestation species in parks. In Frederick’s Waterford Park, pawpaws are hidden in the riparian buffer, blending in with the surrounding spicebushes, viburnums and hydrangeas. They have become part of a growing food forest in Waterford and Baker Parks, resources available and accessible to all residents.

If you have the space, whether sun or shade, a small grove of pawpaws would be a terrific addition to a garden of modest size. Michael Judd, author of For the Love of PawPaws: A Mini Manual for Growing and Caring for PawPaws—From Seed to Table, grows multiple varieties of the trees in his gardens near Gambrill State Park. Judd recommends planting several different varieties to get the most production from all the trees. “They are an adaptive tree with a really diverse genetic pool,” says Judd. “There are new varieties coming out constantly.” 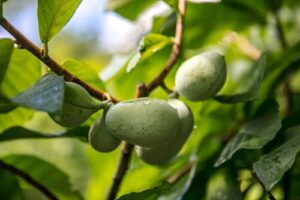 Judd grows a variety of pawpaws at his Long Creek Homestead, some of which he has simply named, “Mike’s Select Seedlings,” because he can’t be sure which varieties contributed to the baby trees since they are grown from seed or grafted from native trees with no specific variety name. But he can be sure they will thrive. Those that are cloned and grafted from known varieties can be assured of the offspring variety.

While pawpaws have thrived on their own for thousands of years, their flowering and fruiting is somewhat complex, making it difficult to grow for commercial production. There are small pawpaw farms here and there, but the cost per pound of the fruit is exorbitant. Pawpaw flowers have both male and female parts, but they mature at different times to prevent self-pollination on the same tree. The burgundy, upright bell-shaped flowers usually appear in early May. Beetles and flies are the main pollinators, being attracted to the slight rotting-meat-like stench of the flowers. The smell isn’t evident unless your nose is in the flower.

The leaves and stems contain a pungent compound that drives away deer, rabbits and other critters. It is one of the few plants that can be grown outside a deer fence that won’t be damaged by deer browsing. That compound is important for zebra swallowtail butterfly caterpillars and pawpaw serves as their host plant, their exclusive food source. While most critters won’t feast on the foliage or twigs, there will be competition for the crop. Squirrels, rabbits, raccoons, birds and many other critters eat the pawpaw fruit.

Pawpaw fruits do not easily ripen on the counter if plucked early, even when bagged with a ripe banana or other fruit. Commercial producers typically pick fruit that is underripe and ship across the country to display on grocery store shelves. The challenge is that when picked ripe, pawpaws only last two or three days before going to mush or if picked too early do not ripen at all. The fruit is only ideal for hyper-local food markets and only for two or three weeks in the fall.

It is a rare treat in September when a new pawpaw patch is discovered and the fruits are ready for harvest. A proper patch at the right time has an intoxicating sweet odor, often because some fruits have dropped and begun to rot. That is the time to pick. The fruits are oblong, green with black splotches, and range from golf ball- to palm-sized. They grow in clusters under the foliage and can be difficult to spot from a distance. The best way to find pawpaw fruits is to venture into the patch and look up. The fruits should be firm, but slightly soft, similar to testing an avocado for ripeness.

Fruits can be enjoyed fresh or made into a variety of tasty treats but be sure to avoid eating the seeds. Pawpaw is a great replacement for banana in breads, used as a custard, made into a fruit butter spread and even for drinks. Judd’s book contains an entire section dedicated to recipes for enjoying the harvest.

Growing your own pawpaw patch is fairly easy, but you’ll need at least two, preferably different varieties, to produce fruit. “Plant them in full sun and give them a huge mulch ring,” says Judd. Be sure the soil is moist and well-draining. Judd has some pawpaws available for pre-order at his annual Paw Paw Festival this month, but they also are available at a variety of online nurseries.

Though they grow along most of the creeks and rivers in our area, some are off-limits to picking. The C&O Canal National Park prohibits foraging, but other parks may allow picking. Check with the park or other space before collecting fruits.

The Paw Paw Festival at Long Creek Homestead is open to the public, but you must reserve tickets in advance as there is limited parking. For more information, go to www.ecologiadesign.com/2019/09/10/paw-paw-festival-longcreek-homestead.