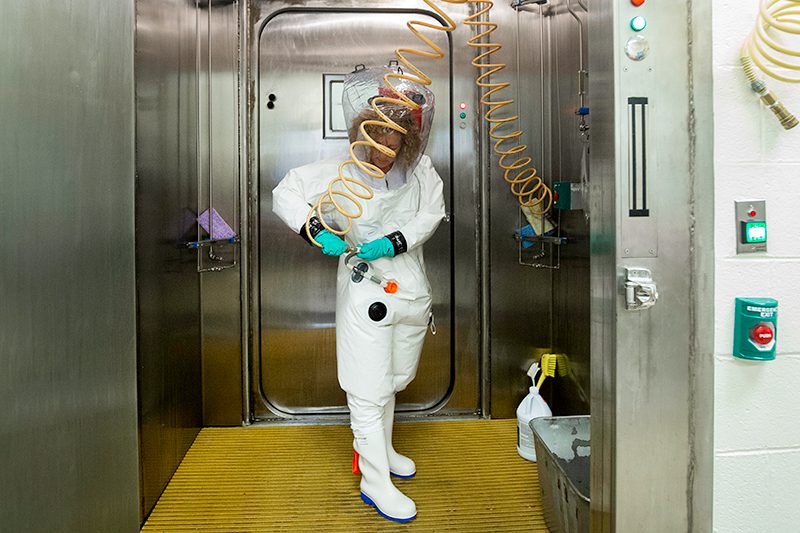 Slicing through a long, low, drab building on the Fort Detrick campus is an ordinary hallway with painted cinderblock walls and heavy metal doors. But this passage, dubbed the Main Hall by those who work here, leads to some of the most sensitive infectious disease laboratory research in the world.

This corridor accesses some of the most heavily protected labs in the world. It is here, in a building that employs about 700 people, that scientists examine some of the globe’s most dangerous microbes. In these labs, a successful vaccine for Ebola was created. Researchers in these labs with the U.S. Army Medical Research Institute of Infectious Diseases—better known by its nonetheless clunky acronym, USAMRIID—have worked with anthrax, SARS and MERS. “We do everything from basic scientific discovery up to clinical trials,” explains Col. E. Darrin Cox, USAMRIID’s commander.

Today, about half of the agency is focused on developing diagnostics and therapeutics for the COVID-19 virus behind the current coronavirus pandemic. Researchers worked through the pandemic closures this spring, doing a mix of telework and in-person research.

But in some ways, UAMRIID’S work began before COVID-19 arrived on U.S. shores, even before it was discovered in China.

A year ago, scientists engaged in tabletop simulations of possible disease outbreaks and discussed potential rapid response scenarios, says Dr. Keersten Ricks, a diagnostics specialist. Those exercises proved to be excellent preparation for the current outbreak. “It’s testing our systems,” she says.

The race to find a vaccination and treatments for the coronavirus involves government scientists working with those from academia and industry. Representatives from each bring something to the research table, Ricks says. “Even though we [in the scientific community] feel like we’re going fast and hoping to develop a vaccine in six to 12 months, it’s never been done before,” she says. “We’re all working as quickly as we can, so there’s a lot of pressure.”

Ricks is part of a team developing tests that researchers hope will easily and accurately predict the presence of COVID-19. Although USAMRIID is focused on biological defenses to infectious diseases that may affect America’s military and public, Ricks is leaning on her background in analytical chemistry and diagnostic development to add to the knowledge basis of COVID-19 testing.

Dr. John Dye, chief of viral immunology who has worked at USAMRIID for nearly 20 years, likens Operation Warp Speed, the formal name of the effort to find a vaccine and treatment for COVID-19, to World War II’s Manhattan Project because the size, speed and the coordination of effort is similar. For Operation Warp Speed, scientists from the United States, France, China, Italy and the United Kingdom are working together to develop a vaccine and treatments for COVID-19.

Global trade and travel have intensified the international spread of viruses once contained to animals or people in distant parts of the world. As a result, the past 20 years have seen a dramatic increase in lethal infectious diseases.

“A lot of the agents we work on are not indigenous to the U.S.,” says Dye. “We’re going to get [these viruses] occurring more often. We’re moving into areas where humans haven’t been, and the spillover into humans is happening more and more. That’s why we have Ebola, SARS and MERS. We’re increasing transmission possibilities, and we need to be prepared for what’s coming next out of these areas.”

SARS, or Severe Acute Respiratory Syndrome, was identified in 2003. Like the current coronavirus outbreak, known as COVID-19, the SARS outbreak spread through aerosol droplets. Its reach, however, was much more limited, mostly through very close contact. SARS is much more deadly than COVID-19.

MERS, or Middle East Respiratory Syndrome, is another deadly coronavirus that spreads through very close contact. Ebola, which causes fever, aches and pains, stomach distress and hemorrhaging, proliferates through bodily fluids. Ebola was first diagnosed in 1976, but occasionally flares up, most recently in West Africa in 2014-16 and in the Democratic Republic of the Congo in 2018-20.

USAMRIID researchers were on the front lines to create a treatment for Ebola, and one of the lab’s projects contributed to the work of Gilead Sciences in its creation of Remdesvir. Remdesvir, formulated to help Ebola, is showing promise as a treatment for COVID-19.

“We can learn from these successes and use historical information to be better prepared for the next outbreak,” Dye says.

USAMRIID is home to four types of laboratories, which range from Biosafety Level 1 to 4. Level 1 and 2 labs require the kinds of safety procedures you might find in a college science lab or a clinical lab in a hospital. These labs work on microbes that do not cause disease in healthy adults, or with microbes that can be easily controlled if they do cause a disease.

In these labs, scientists can work on open tables, although infectious material is always contained in a negative-pressure biological safety cabinet. Scientists wear lab coats, which hang on a rack in a rainbow of colors that reflect personal preference. They wear eye protection and gloves when needed. Autoclaves are used to decontaminate equipment. Handwashing and eyewash stations are all around, and offices are in separate rooms. Visitors can be escorted through these labs, although access to Level 2 labs is restricted when research is taking place.

Visitors are definitely not allowed in USAMRIID’s Level 3 and 4 labs. Three Level 4 suites and 12 Level 3 suites are lined in a row along the Main Hall. USAMRIID is home to the largest collection of Level 3 and 4 labs in the country. These labs need a constant new supply of clean air. Researchers enter and exit through a series of interlocked doors.

Level 3 labs work with microbes that can cause serious or fatal diseases that can be transmitted through respiratory droplets in the air. Entrance and exit is tightly restricted. Researchers wear special gowns, gloves and face coverings, and they use respirators to prevent exposure to diseases like hantavirus, encephalitis and other serious infectious diseases for which there is an approved treatment or vaccine. This is where testing with live COVID-19 virus is occurring.

USAMRIID has the only Level 4 labs in the Department of Defense; there are just 15 of the labs in the United States, among about 50 worldwide. Other Level 4 labs can be found at the Centers for Disease Control and Prevention and at major universities. Among the USAMRIID researchers, about 120 are approved to work in Level 4 labs. It’s in these labs where researchers work with dangerous, exotic microbes where there’s a high risk of infections being transmitted through the air.

This is where researchers have worked on diseases like Ebola, Marburg and other diseases which have a high rate of infection and death and for which there is often no FDA-approved treatment.

A glimpse through a window of a Level 4 lab shows coiled yellow tubes hooked to thick vinyl suits worn by researchers. These tubes provide fresh breathing air, ensuring researchers don’t accidentally inhale a lethal viral droplet. “It takes years of training to learn how to use this equipment properly,” Ricks says.

There’s a positive-negative airflow system that prevents potentially contaminated air from escaping. Pressure meters outside each lab monitor the positive to negative air pressure for accuracy.

A training lab is used to prepare scientists for Level 4 labs. Angela Ragan, alternate biosafety officer, trains new researchers and those who need refresher courses on entering the lab. These courses take place several times a month at USAMRIID.

Researchers are trained, gradually acclimated and observed to make sure they follow correct procedures. The vinyl suits for Level 4 labs weigh about 12 to 14 pounds, which can test any researcher’s stamina. “It’s a lot to make sure you’re physically and mentally prepared with all of the things that go into research in a higher containment atmosphere,” Ricks says.

“When you start to feel comfortable, you’re in your own little bubble, and you can focus on what you’re doing, but it takes a while to get to that point,” Dye says.

Researchers entering Level 4 labs don scrubs before putting on the suit. They inspect their suit for tears and holes before entering a chemical shower area. As they move from the outer perimeter through metal doors to the chemical shower and finally into the lab, they repeatedly plug in their air hoses.

When leaving the lab, the procedure is done in reverse. There’s a water and chemical shower for the suit, followed by a traditional shower before they leave. Researchers typically spend two to four hours in a Level 4 lab before taking a lunch break, followed by another two to four hours in the lab. If there’s a push to find a vaccine or treatment, like with the Ebola research, scientists may spend longer stints in the containment areas.

The vinyl suits, which at USAMRIID are blue, white or orange, cost about $4,000 and last about a year depending on frequency of use.

The CDC shut down research in the Level 3 and 4 labs for about six months starting in July 2019 after flooding caused issues with wastewater decontamination and problems were found with employee recertification training. A few months later, partial operations began, and in March, the lab was brought back to full capacity.

In a Level 2 lab, Ricks explains some of USAMRIID’s current projects. One focuses on working with partner nations, creating kits and training programs to teach scientific researchers in Africa and other parts of the globe how to screen for diseases that have been circulating in those areas. “This work gives insight into the types of diseases local populations as well as deployed military personnel can potentially be exposed to.”

Another project applies the same research into a potential diagnostic test for COVID-19. “This one works like a pregnancy test,” Ricks says, displaying a row of test strips. “In a pregnancy test, you’re looking for the presence of pregnancy hormone. You can make these kinds of tests for almost any pathogen out there.”

She is testing whether saliva and general nasal swabs can be used for accurate testing, rather than the 6-inch-long swab, commonly called the “brain tickler,” used in current COVID-19 testing. “This project

is looking at whether saliva would be a viable test with viral surrogates in the lab,” Ricks says. “Then if it works, we would bring it into a [Level 3] lab and test it with a live virus.”

Ricks adds, “It’s been gratifying to see how fast we can make [a test] from scratch.”

Working with proteins, DNA molecules and RNA molecules, her group of scientists looks for antibody response that can indicate an infection. “On the protein side, there are five of us,” she says. “On the molecular side is a larger group of 10 to 15 scientists.”

Diagnostic research is as key to controlling the COVID-19 outbreak as a vaccine, she says. “The onus is on the researcher developing the test to make sure it’s sensitive enough,” she says. The responsibility is also on the scientific community to make sure the public gets accurate, understandable information, she adds. “That’s what’s going to ease anxiety.”

President Nixon ended this biowarfare program in 1969 and replaced it with USAMRIID, which has the mission of protecting soldiers from biological threats and protecting the public by investigating disease outbreaks and other risks to public health.

USAMRIID’s role in containing the 2014-16 Ebola outbreak is one of the lab’s proudest accomplishments. “Virtually every medical treatment for Ebola came through us,” says Cox, the commander. “Many of the diseases we research aren’t super common, but they have tremendous impact because there are no good treatments or vaccines available.”

While the research is aimed at protecting service members from infectious diseases, the work benefits the public, Cox says. Most of USAMRIID’s staff are civilian. Its scientists work with students at all levels. Some judge science fairs, while others give Career Day and STEM talks. Interns at USAMRIID often come from local high schools and Hood College.

“We’re all on the same team here,” Cox says. “Everyone is devoted to the mission.”