On Spins and Needles 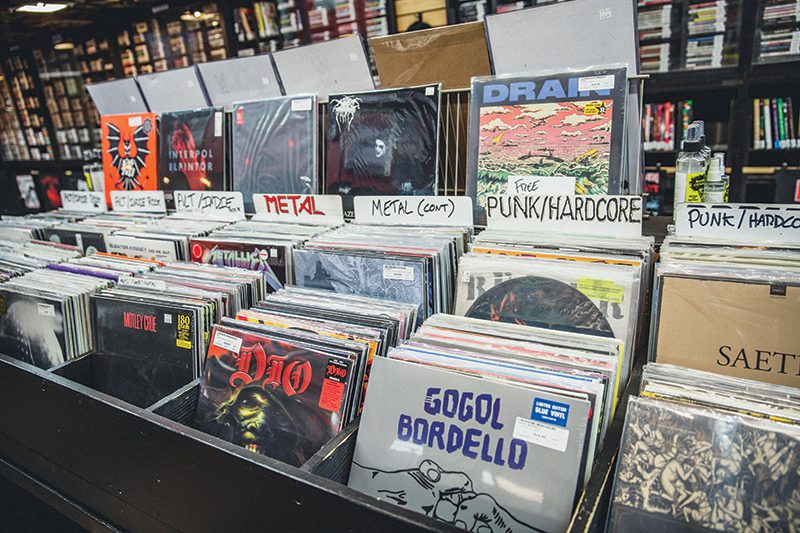 Just take those old records off the shelf … Then slip into the Record Exchange for an opportunity to sell, buy, trade and reminisce. Or, head down to Vinyl Acres a couple blocks away and check out the music and chat with a seasoned rock musician who doubles as a store owner. Both Downtown Frederick stores greet customers with the distinct sounds of vinyl records, not to mention an assortment of music-themed products.

It is difficult to describe shop owners Sam Lock (Record Exchange) and Bob Berberich (Vinyl Acres) as competitors. They feel the same passion for music and display the same love of the disc in its natural form. “Life shouldn’t always be a random shuffle,” says Lock. “Buy the record and see the physical product.”

Berberich agrees. “See the artwork and read the liner notes,” he says. “It’s something concrete to hold on to.” The men have traveled different roads that ultimately led them to Frederick and they say they wouldn’t have it any other way. “I love Frederick. It’s a livable small town. They are doing an amazing job keeping old buildings, keeping it clean, keeping it safe. I am able to make a modest living, doing what I love doing,” says Berberich.

Lock says the sidewalks along Market Street are filled with charming people. “Frederick is the closest thing to England, with people walking down the street and coming in,” he says. He came to the U.S. from the U.K. in 1997 and became involved with the Cleveland-based Record Exchange. He ran a string of stores in the Washington, D.C., region, eventually paring down to one store in Frederick. He says he has a large group of mostly male customers between the ages of 18 and 35, but he also has a reliable group of older patrons. He has been at his current location for nine years and says he just signed a five-year lease with an option for five more. “Frederick, you won’t be getting rid of us real soon,” he laughs.

Lock’s business is a buy/sell/trade enterprise. He offers various items in his store, but says vinyl records are the bread and butter of his business. “When vinyl died the first time in the early 2000s, we branched out into videos, movies and other products. In 2011-ish, vinyl really came back.”

What’s the draw of a vinyl record? “Sound quality,” Lock says. “It’s superior in every way.”

Most customers like to come in and look through the bins that hold about 5,000 records. He may be prepping and pricing up to 3,000 more to add to his inventory at any given time. If you can’t find what you’re looking for, Lock will special order it for you. He offers advice to customers: “There was a time in the ’90s when things were recorded for CDs. Be careful of the re-issues [on vinyl] because they don’t sound deep and warm.”

Eric McComas, a local artist, is one of Lock’s customers who understands the aesthetic value of records. “When you walk in the store, it smells like old vinyl and incense,” he says. “I’m ready to listen to some music and chill out. I buy stuff that I can listen to as I do my art,” he says.

Several years ago, McComas brought in 400 45-rpm records to trade. “I collect to improve my collection and to help others improve theirs,” he says. He is just as enamored with records as Lock is. “You put the needle on the record. That’s where it’s at. It’s like a platonic relationship with a record,” he says.

McComas says he values the covers and sleeves of the albums as much as the music. Reminiscing about buying new records back in the 1980s, he says, “You opened it up. You got to see photos of the band. They were sitting on motorcycles. Or, the hair bands were all dressed up like girls. You connected with the band better.”

Berberich has lived the rock lifestyle, and he’s happy to tell you about it as he invites you to listen to the record he selects for the turntable in the store. He is well-versed in any genre and his store is filled with everything from classical to country and all points in between. He is a drummer whose personal musical journey included being a member of the Maryland-based band Grin with guitarist Nils Lofgren from 1969 to 1974. Over the years, he opened for rock ’n’ roll legends Jimi Hendrix, Neil Young and Van Morrison.

His wife and co-owner of the store is singer Martha Hull (original lead of The Slickee Boys, the Dinettes and current solo artist). He is still a working drummer, singer and music historian who keeps an open mind about any style. Got something obscure? He will give it a listen, and maybe buy it from you. He will always be available to hear your stories and share his own.

“The history of rock ’n’ roll is American history. All our cultures came together and cultivated rock ’n’ roll,” he says. “From a spiritual point of view, it brings out the best. Art does that. It enriches our souls.”

Berberich is no musical snob. While he can tell you facts and figures about rock, blues, jazz, country and classical music, he acknowledges that Rap is one genre in which he is not well-versed. But, he says, “I’m all for it. Any music, any art form. Try it, you never know.”

He speaks about the sound quality of vinyl records with passion and technical expertise. “Here’s an analog wave,” he says, gesturing with his arm by making a wide arch. “Digital is a sample of the wave. It’s points on the wave, not the in-between. You still have the music, but there’s a warmth and a depth that’s missing.”

Regular customer Tom Rogers also loves the sound of vinyl records. “I’ve always collected them, since I was a kid. They sound better,” he says. When he enjoys his considerable Beatles collection he says, “It sounds as if John, Paul and George are in my living room. How much better can you get?”

Finding a much-loved or long-forgotten, high-quality record is the goal for most collectors. But some say they have found treasures tucked inside previously owned albums. Rogers discovered George Harrison’s autograph on a fragment of a plastic bag in a copy of the artist’s Cloud Nine album. In a Livingston Taylor album, he found a letter to a runner-up in an on-air contest from a radio station program manager. Apparently, the record was the consolation prize.

Eric McComas recalls a Cheech and Chong record that included rolling paper the size of the album tucked inside. He does not claim to have found an album with the paper intact, presuming that most, if not all, of it went up in smoke decades ago. But he found something special in a Poison album: The first pressing featured artwork depicting a devil with a nine-inch tongue hanging out of its mouth. Apparently, the over-the-top artwork was edited in later releases. “I found the original with the tongue and have it in my collection,” he says.

Customers continue to look for treasures in both stores and the proprietors aim to help in the hunt. They add to in-store inventories continuously and place orders to distributors when customers can’t find what they want. The Record Exchange will soon offer more products, including vintage clothing.

Berberich keeps Vinyl Acres well-stocked to please his customers, but his personal satisfaction comes from running his store with his wife and daughter. “To end up here, to work here with my family—I feel like I’m the luckiest man on the planet.”