Food for the Soul 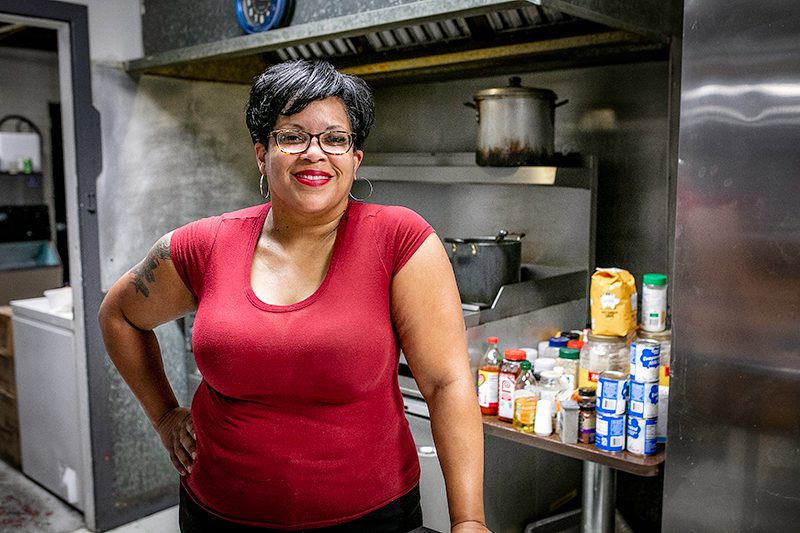 It is OK to be confused about the “wings.” After all, on the surface, at least, it is about the food.

Make no mistake, Imojae’s Soul Food has very good chicken wings. They’re meaty mouthfuls, fried crisp and served with all three sections intact for maximum juiciness. They appear regularly on owner/founder Sarah Coleman’s tight list of classic homestyle favorites, which she cooks and serves from the commercial kitchen she rents at the Mountain City Elks Lodge on West All Saints Street.

But it is here that another kind of wings—angel wings—fan her devotion to food, faith, family and community.

This isn’t Coleman’s first time cooking professionally. Five years ago, she was half of Soul Food the S&J Way, a small, home-based business she ran with her son, Josh King. Coleman, who also serves as a prisoners’ rights advocate and parole consultant, taught her son to cook when his police record made it difficult for him to find work, and he quickly developed a knack for it. “That boy could not boil water at first,” chuckles Coleman through misty eyes. “Eventually, I tell you, his fish and chicken were da bomb. He got it down to a science. He could look at the color of the flour to know that his seasoning was perfect.”

They had some success delivering meals to local businesses, but everything came to a crashing halt when Josh was murdered by a stranger with a gun. “I felt like I didn’t have a purpose anymore. I stopped cooking. I went through the worst depression.” When her elderly father suffered a stroke just two days later, she jumped into caregiver mode. In a way, she says, it helped her escape the grief. 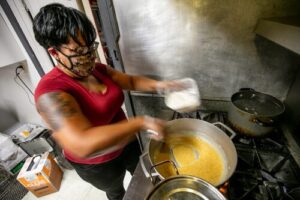 While taking care of her father, Stonewall Jackson Motley, a veteran of three wars, she continued to show love through cooking. She’d whip up big, Southern-style breakfasts: fried scrapple, eggs, toast and creamy grits. When the crew at the local Junior Fire Company on Market Street came to visit or assist, she’d load them with containers of food and tea. She also hosted dinners to thank the family’s helpers, but she felt stuck.

Family and friends encouraged her to find something she enjoyed doing. “I knew that I had the tools to become self-sufficient,” says Coleman, but starting another food business didn’t seem right without her son. “It was our thing.”

Divine inspiration came one day while driving past the place where her son was buried. Coleman explains the revelation, “I could hear it as clear as a conversation: Imojae’s.” The name was born from an acronym: In Memory Of Josh And ‘Em, “because everyone knows someone who has transitioned on and what better way to provide comfort than through good food.”

The business grew slowly. When COVID-19 hit just after Imojae’s first anniversary, effectively strangling the restaurant industry, Coleman struggled to cover expenses and kitchen rental. She didn’t qualify for small business loans or unemployment. Then a friend suggested posting on a new Facebook page dedicated to supporting Frederick County restaurants and takeout places during the pandemic.

“I uploaded 10 pictures of my soul food and introduced myself,” says Coleman, “and my phone went crazy.” It was another well-timed miracle. 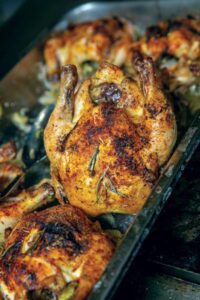 At its peak, the Facebook page’s membership swelled to more than 27,000 people before being archived in June, even as other food-based groups proliferated on social media. “We built a community within a community,” says Coleman, acknowledging a particular enthusiasm from some new customers in supporting Black-owned businesses. She’s grateful for the opportunity to connect and hopes customers come back simply because they enjoy the food, a universal pleasure. “It’s so neat because people from all different walks of life come together.”

Today, Josh King’s smiling image peers through a starry night sky on the banner of Imojae’s Facebook page that more than 1,000 fans follow for daily menus and ordering. Animated and enthusiastic, Coleman bustles around the steamy kitchen Thursdays through Saturdays. Her fiancé Tony Smith is the front man, interacting with customers and collecting payment. Daughter Kiiursha Motley juggles social media while turning out trays of macaroni and cheese, yams and string beans, earning high praise from mom. “My daughter can make better potato salad than me.” (Coleman’s other daughter, Beverly King, runs King’s Treats in Germantown, where she also pays homage to her brother.)

On a bustling fish “Fry-day” Imojae’s averages 50 to 60 orders that may include flaky whiting, meaty catfish or crab-decked cheesy mac. Customers can connect online, but popular dishes sell out fast, so most folks opt to call or text Coleman (240-344-6655 or 240-529-3724). Regulars know not to call the Elks Lodge, though, because that number does not ring through to Imojae’s. Pickup is around back, on Mullinix Alley across from the picnic pavilion. Payment is online or in cash, no credit cards.

On a recent day, Coleman is alone, hoisting foil trays laden with hearty pot pie, served by the scoop, and creamy mac and cheese. Petite roasted game hens nest atop slivers of sweet onion in a baking pan and a vat of creamy gravy sends up tendrils of steam. Tony is running errands while Kiiursha is recovering from foot surgery.

Diving in, the pot pie is full of shredded white meat chicken and tender potatoes with bites of diced carrot, peas and corn, topped with a thin layer of golden crust. The fried pork chop, a crowd favorite, is served bone-in, dredged in savory, crispy coating. Sides may include mild yellow rice with colorful pepper bits or chunky yams, which Coleman declares are “the good kind.” Her fried cabbage is slightly sweet with a hit of peppery heat to wake up the tongue.

The mac and cheese is a star in its own right. No pale, boxed afterthought or naked noodles; there’s golden goodness in every nook of this creamy casserole. The menu also occasionally includes baby back ribs, turkey legs or shrimp and grits. Happily, portions are substantial. 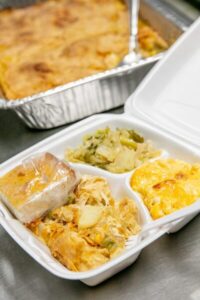 Coleman loves to talk about miracles and is transparent in trying to repay each blessing in her own way, by offering “pay what you will” days and handing out unsold meals to the community. Fans notice and their feedback on social media is overwhelmingly positive. They post pictures of the food—and sometimes emptied cartons—with notes like, “If it rained in heaven, it would rain this gravy.”

“You can taste the love that’s put into the cooking.”

“Holy cow I have enough food for three meals. Guess I know what I’m packing for lunch tomorrow.”

And, “Eating Imojae’s Soul Food is like you’ve gone to heaven!”

Coleman blushes when fans call her “chef” or ask for pictures. They bring her treats and call to check on her when the kitchen is closed. People have expressed interest in investing in Imojae’s, but she’s waiting for the right vision. There’s even a GoFundMe movement to get her a food truck.

“It is something that I will never forget or take for granted. … I feel my purpose again.”