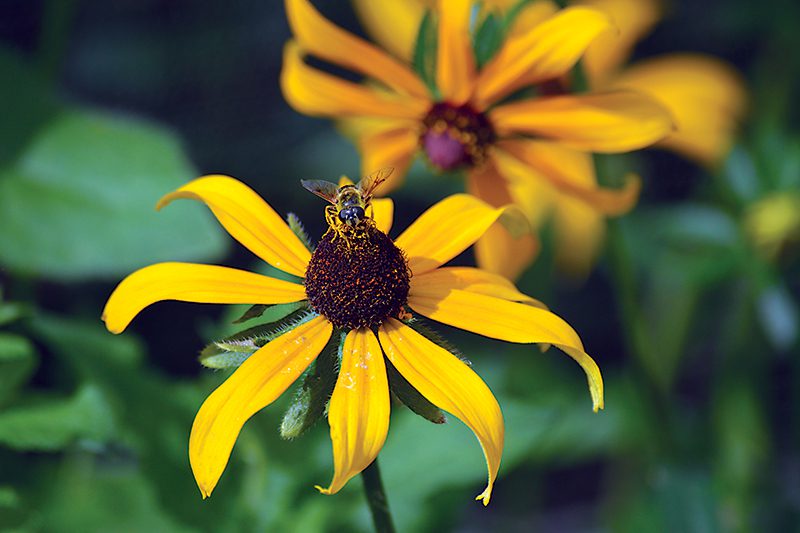 Black-eyed Susans can be found from finely manicured flower beds to roadside ditches in Maryland and throughout much of North America. With a native range from Maine to Manitoba, Canada, and Florida to New Mexico, this hardy plant brings a cheery summer face to any habitat.

Some gardeners hate them because they are so prolific and excellent at self-seeding, but others look forward to their brilliant yellow punch of color every summer. Black-eyed Susans bloom consistently for several months and don’t give up until the end of the season.

It makes sense that the black-eyed Susan would be Maryland’s official state flower, with its yellow petals and near-black center. The black-and-yellow quadrants on the popular state flag represent the paternal coat of arms of George Calvert, Maryland’s first Lord Baltimore. Calvert was an Englishman searching for a place with a temperate climate where Catholics and Protestants could thrive together. King Charles I granted Calvert a royal charter to settle the land just north of Virginia along the Chesapeake Bay.

The red-and-white quadrants of the flag represent Calvert’s maternal family coat of arms, the Crosslands, but the story continues. “The red-and-white crossed portion of the Maryland state flag, broken out by itself as the Crossland Banner was used by pro-Confederate Marylanders during the Civil War. Several Confederate Maryland units used a form of this cross, the cross bottony, on their unit colors, their flags. The colors were significant in that they were known as the secession colors,” says Civil War reenactor Sean Weaver.

Indeed, it was not until after the Civil War that the Maryland flag we know today was created. It was flown for the first time in the late 1880s and would not be officially adopted until 1904.

Keen on keeping with the flag’s palette, the state has since selected several official symbols that brandish at least some of the familiar colors, including a bird (Baltimore oriole), insect (Baltimore checkerspot butterfly) and even a gem (Patuxent River stone). But it is the flower that is perhaps the most visible symbol in nature, throughout the state and beyond.

One of the more curiously named flowers, black-eyed Susans leave most wondering who Susan was and did she really have black eyes? Many historians agree that the common name comes from the poem Sweet William’s Farewell to Black-Eyed Susan, penned by John Gay in 1720. The poem refers to dark-eyed Susan searching for her William when his boat was ashore. William ends up setting sail at the end of the poem, but the story was so popular that the poem became a ballad and even prompted sequel stories in the form of songs and a play. When black-eyed Susans are planted with sweet William—a flower in shades of pink, red or white—the two bloom at the same time, making the reuniting of Susan and William all the more precious. The flower profusion of all the colors, albeit short-lived, is glorious. Susans continue to shine long after Williams have faded.

There was an argument among lawmakers about what should be the state flower. Goldenrod was a top contender because one delegate thought the flower would better honor World War I soldiers. Goldenrods are brilliant yellow and would be an excellent floral representative, but black-eyed Susan had already gained wide support from Marylanders through songs and its color connection to the flag. In April 1918, Gov. Emerson Harrington signed into law the legislation that named the black-eyed Susan the official state flower.

Marylanders have always been a hardy bunch and the black-eyed Susan is a terrific representation of that spirit. Nowhere are Susans more prominent than at the Preakness Stakes, except they aren’t really Susans. The yellow-and-black flowers at the Preakness are actually Viking poms, a lookalike flower that blooms in May, a bit before black-eyed Susans are ready to show their blossoms. The first faux Susans, yellow daisies with black-painted centers, were first used around 1940. Imagine the painstaking work it took to paint thousands of daisies to look like black-eyed Susans.

Though black-eyed Susans had been growing throughout much of the United States when the colonists arrived, it’s unlikely they encountered the plethora of Susans we now see at the Preakness or other events, but they were common enough to gain attention. The flower was given its Latin reference by Linneaus himself in 1753. Named for his mentor, Olaf Rudbeck, Linneaus paid tribute with the name Rudbeckia hirta. The species name hirta is Latin for hairy, appropriate for the native wildflower since its stems and leaves are covered in fine hairs.

Poking their first leaves out in early May, native Susans grow tall in only a month, begin flowering in June and will continue the show until well into September. Grown too closely together or without enough sun, they tend to get leggy and topple into walkways or other plants, though they will still flower prolifically. Susans do tolerate drought, but when soil is too dry and the air is humid, they can develop powdery mildew. Adequate air flow and watering can help prevent these problems. Susans also can be susceptible to Septoria leaf spot, a common fungus on tomatoes, but there are black-eyed Susan varieties that are better at resisting fungal pathogens. “Powdery mildew can be a problem but a new cultivar, American Gold Rush, is resistant to this and Septoria,” says Extension Educator Ginny Rosenkranz. She also noted that the large-flowering Indian Summer also seems to be resistant to the fungi.

The eye of the flower is actually hundreds of tiny individual flowers, which are excellent nectar sources for pollinators, including “butterflies, bees, predatory wasps, scoliid wasps, moths, skippers, syrphid flies and beetles,” according to Rosenkranz. Those flowers become hundreds of seeds that are as small as a pinhead. The seeds are favorites of goldfinches, chickadees, eastern towhees, cardinals and white-breasted nuthatches. There are black-eyed Susan varieties to fit in gardens of any size, with some growing as tall as 9 feet, says Rosenkranz.

Native black-eyed Susans are simple to grow from seed, but other varieties can also be purchased as a plant from a nursery. Select a spot that will get at least six hours of sunlight and that is visible to a seating area; you won’t want to miss the show. Using the black-eyed Susans as an anchor, other perennials and annuals can fill in the garden. Purple coneflower, another long-blooming perennial, makes an excellent garden partner with Susans. Pink Muhly grass, a perennial that fountains out with pinkish-purple plumes, makes an excellent backdrop for the punchy yellow Susans. Catmint, or nepeta, is a very well-behaved mint that actually doesn’t spread and is quite forgiving. It attracts pollinators with its tiny purple flowers and is a long-blooming perennial. There are plenty of other plants that will work with black-eyed Susans.

With new varieties that are shorter or taller than the native flower, Susans have become quite popular in home gardens. They can be found at most local nurseries. Though not common in the wild, they are being included in meadow mixes for recovering land as wildlife habitat in Frederick and throughout Maryland. One particularly prolific wildflower meadow is located in Waterford Park. The meadow includes black-eyed Susans among many other native species and is a haven for birds and other critters.

Hardy, long-lived and gets along well with other plants, the black-eyed Susan embodies a sense of tolerance and freedom. George Calvert himself would have nothing to complain about it being the official state flower.