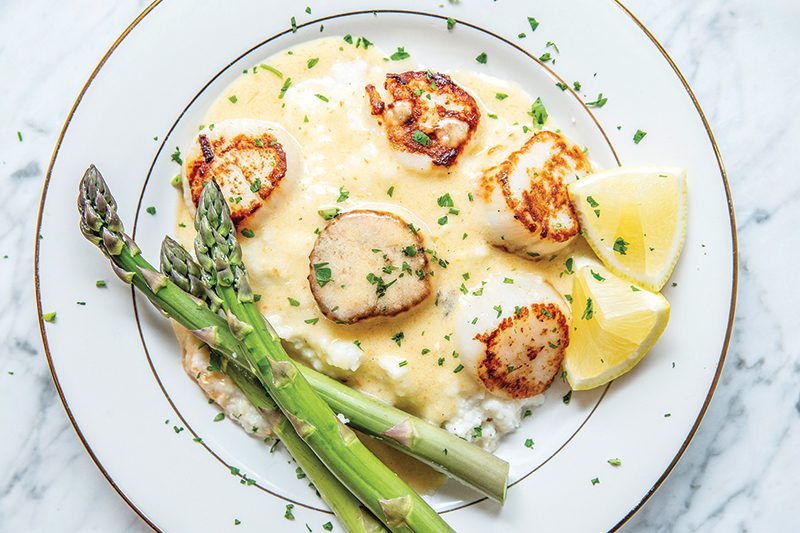 Obesity was never a problem in France, at least not until its citizens discovered fast food and modern preservatives, but that’s another story Astonishingly, the culture most associated with fine dining—with rich, buttery sauces, decadent pastries, mountains of bread, hundreds of cheese varieties, and birthplace of bubbly—is also known for lithe, reasonably healthy citizens who seem to maintain both a lusty appetite for good food and a comparably trim waistline. This French paradox redux seems like a puzzler but behavioral studies credit “mindful eating,” knowing when to stop eating, and choosing fresh, high-quality fare as the magic combination. While bedraggled Americans gulp on-the-go breakfasts of diet cola and dry cereal, snack mindlessly at our desks while skipping lunch and fall into a routine of drive-through dinners, traditional French food wisdom espouses that leisurely meals of modest proportions, savored among friends, do more than fill the belly.

That is the idea behind Up on Market, a cozy little French-inspired bistro and inn where Market and 3rd streets meet. The place quietly opened last November after nearly six years of planning and renovations to the historic structure. According to current owners, Michele Fontaine and Francis Skrobiszewski, the 301 N. Market St. building lands on Maryland’s registry of state historic sites as the “oldest commercial building in Frederick.” Built before 1778, the building was originally a residence for Richard Potts, a Revolutionary War hero and member of the Continental Congress. It spent the next 300-plus years as a variety of shops and apartments. It was in rough shape by the time the couple purchased it in 2013, but they remained steadfast throughout construction and legal issues, fine-tuning the vision seen today.

It is a late spring afternoon and David Manning Jr., Up on Market’s general manager, is using one of the dining room’s marble-topped bistro tables as a makeshift desk, as COVID-19 restrictions limited restaurants to takeout and delivery service for most of the past three months. Natural light spills in from a surround of large windows. Muted sun glints off well-polished marble and catches golden accents in the embossed wallpaper. Under foot, black-and-white tile flooring in distinct geometric designs delineate service areas. A corner nook looks out onto the cross street where a few people saunter past. It is set with two small, round tables, perfect for tête-à-têtes, encircled by antique Thonet chairs, their curling bentwood beech a technological marvel for the mid-1800s.

Manning deftly pulls a drink from the gleaming La Marzocco espresso maker. The resulting brew is rich and malty, roasted, French-style, just shy of burning, blanketed with a natural layer of nutty froth. With a sweeping gesture around the dining room, he says, “This style is reminiscent of a European bistro, maybe around 1900.” He explains that setting the scene is important because French food is as much about atmosphere as ingredients. “I think it is the energy and the mood behind the food. French culture is what brings it to life. You can be carefree and relaxed with a touch of elegance.”

“Everything is made fresh to order,” he insists, including drinks. “Nothing is prepackaged or jarred.” On busier days, Manning steps in to prepare Up on Market’s signature champagne cocktails. The popular mango version starts with Prosecco, mango purée and a hit of Fabrizia blood orange liquer. It’s finished with a butterflied slice of pink navel orange. The raspberry version uses Chambord while the melon pairs with Midori. The same fresh fruit is in the sorbettos. Other cocktails feature the French spirit Chartreuse, which Up on Market carries in both green and yellow; that distillery uses a closely guarded 400-year-old recipe, infused with 130 plants.

He repeats the mantra, “Nothing less than exceptional,” as he holds up a crystal flute, part of an eclectic mix of vintage tableware collected by the owners during international trips and from estate sales. There seems to be a story behind almost everything in the building. The wrought-iron baker’s stand is from Paris, as is the large mirror and other artwork. The white marble-topped bar, boldly veined with gray and accented with scrolled walnut panels, is salvaged from a Washington, D.C., tavern.

Fontaine created much of the menu with standards Manning describes as exacting, down to discerning the perfect wine pairings or the precise measure of coffee grounds for each pot or mug. Up on Market serves breakfast, lunch and dinner—petit déjeuner, le déjeuner et le dîner, s’il vous plaît. Locally sourced pork from Wagner’s Meats in Mount Airy appears in Up on Market’s sage sausage pasta with tomato cream sauce, as well as the beef bourguignon. This classic comfort food elevates the art of beef stew with hearty red wine, fork-tender chunks of beef and fresh vegetables. Fruits de mer for the popular bacon-wrapped scallop appetizer with miso and seafood pasta entrée come from Trout’s Seafood & Deli Market in Woodsboro.

“We use wild-caught Gulf shrimp,” declares Manning. “It is more expensive, but we found the flavor superior. It is worth it for the quality.” The seafood dish also includes morsels of jumbo lump crab, mussels and jumbo scallops. “Sauces are made to order, from scratch.” Meals are perfectly complemented with a glass of Château des Jacques Clos de Loyse or Louis Jadot Pinot Noir Bourgogne. Perhaps the moelleux au chocolat, French molten cake made with rich Belgian chocolate, for dessert?

There is always quiche, a variety of pastries made daily by a local baker who uses butter and flour imported from Paris, oatmeal, and French toast. Omelets come with fillings that range from smoked salmon with dilled sour cream to smoky bacon lardons swimming in melted brie. Lunch selections may include shrimp-and-grits or French lentil salad in a balsamic Dijon vinaigrette. For le sandwich, guests can opt for a lunch combo with soup, packed for easy takeout. Traditional black peppercorn pâté and Jambon-Beurre (ham with butter) are each served with cornichons on a choice of chewy baguette or delicate croissant. The chicken salad is made with whole roasted chicken and tarragon or savory curry spices. Soup of the day may be a creamy salmon chowder (chaudrée), flecked with fresh dill and petitely diced potato. Other choices span house-made French onion, creamy mushroom or broccoli cheese.

While Manning speaks, a regular customer ambles by, clutching a laundry bag and walking cane. She nods a greeting and Manning excuses himself from the table, “I have to give this woman the lemon tart. She comes in here all the time. We want to do something nice for her.”

When he returns, he continues, “the neighborhood has been so supportive.” Clarifying, unlike the negative stereotype of French food snobbery and aloofness, “This is not a pretentious place. It is a calm, family atmosphere. There is nothing stuffy about it and we do our best to accommodate anyone, in any way we can.”

Leaning forward, he lays a hand over his heart. “The owners want a place where people can come that is beautiful and elegant but welcoming and friendly. They want to do something that they love.” The proof is in the details. Vive l’amour.