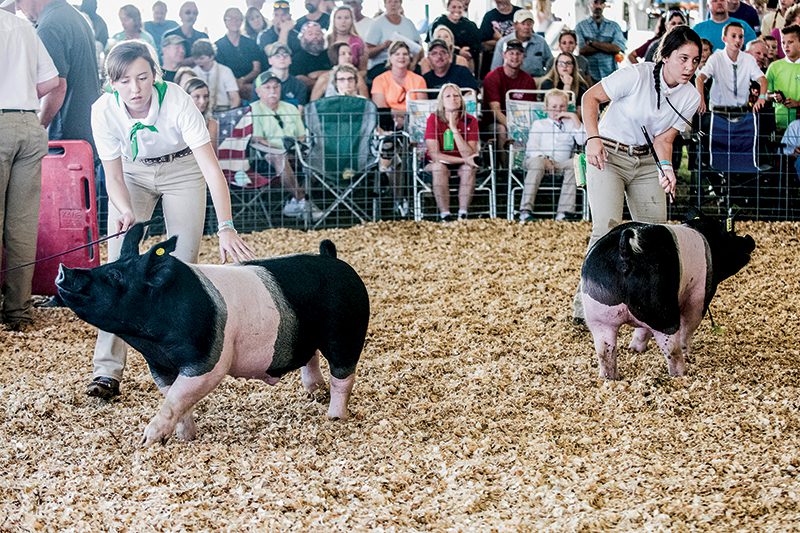 Society may have transitioned from typewriters to smartphones and from 11 television channels to 800, but in many ways 4-H has not changed from its mission of instilling confidence and drive in kids.

There are 643 kids in Frederick County who are in local 4-H clubs, which have grown 20 percent during the past five years. And, no longer are they all from down on the farm; 15 percent of those kids come from Frederick City and its suburbs.

“We are growing by an incredible amount, and mainly by word of mouth,” says Donielle Axline, a lifelong 4-H member who currently leads the program in Frederick County. “We’re seeing growth in animal science programs, especially in small animal—rabbits, poultry, goats—that can be kept in a small space.” The 4-H staff and adult leaders have also integrated science, technology, engineering and math (STEM) principles like the chemistry behind animal feed ratios; community health and food additives; and environmental practices for grass-fed animals into good, old-fashioned best agriculture practices. Indeed, Frederick County’s “is one of the largest 4-H programs in the state, reaching youth through 4-H clubs, school programs, camps and other outreach programs,” says Dr. Nia Imani Fields, University of Maryland Extension assistant director and Maryland 4-H program leader.

The program often associated with annual kings, queens, summer camp and kids sleeping with their animals at The Great Frederick Fair isn’t just for farm kids anymore. As a matter of fact, 4-H members and leaders around the region say the program has never been just about farming. “As much as we’re about agriculture or robotics, animal science, or junior naturalists, we’re about promoting a child’s independence and confidence,” says Elizabeth Thackery, a 4-H parent and lifelong member of the organization.

Spring is always recruitment time in 4-H. It’s an attractive activity for parents looking for clubs for their children—the bargain $10 annual membership fee is possible because the program, started in 1902, is subsidized by university extension programs, foundation fundraising in the corporate sector and annual appropriations from Congress.

While the traditional animal husbandry clubs continue to flourish in Frederick County, specialty clubs have sprung up because 4-H aims to encourage children to explore their hobbies and passions outside school. Now, there are Frederick County clubs that focus on dog showing, environmental studies, horses, insects and robotics.

Madison Spurrier, now 18 and a Frederick Community College student, has been in 4-H since she was 8 years old. “I knew from the beginning that I wanted to show dairy heifers,” she says. Many of her Middletown-area friends were intrigued by her 4-H activities, and she helped educate them about other things the program offered, such as public speaking, fashion design and consumer education. “Some people have thought it is just for farm kids, and there is always that misconception,” she says.

Like many 4-H specialty clubs, Robo-Rangers began because, well, parents noticed their kids’ interests changing. The club’s adult founder, Mark Spurrier, and his wife, who both grew up in 4-H programs, encouraged their kids to join, but the offerings weren’t always what they were looking for. “My son had no interest in dairy judging, but we found other things that interest him—STEM activities have been important for him,” Spurrier says.

The Robo-Rangers club held a recruitment event in March, where current club members demonstrated their robots, Lego models and leadership skills. The kids themselves led prospective young club members and their parents through a slide presentation on the club’s activities and benefits. The presentation followed a short club meeting at which club leaders, some as young as middle school students, presented committee activities and project milestones—all under the gavel and protocols of Robert’s Rules of Order. “I want those kids to feel confident they can walk into a business meeting and handle themselves professionally,” Spurrier says.

Jon Rowley, an adult club leader, says he and his son found 4-H when they realized his interest in the robotics competitions came with a pretty big price tag; 4-H was an organized way to look for sponsors for teams. “I always thought 4-H was about growing crops until we discovered this group,” he says.

Another value of 4-H that lives on no matter what the program focus is mentoring. “I like that there are lots of opportunities to mentor younger kids,” says Benjamin Atelsek, a Walkersville Middle School student in Robo-Rangers, who also practices archery in the shooting sports 4-H club. Many of the older kids work closely with the younger kids to teach them to lead the clubs.

Since 4-H clubs were already changed by the technologies their young members brought to the table, the local kids were well-positioned during the current pandemic emergency to swing into online meetings and 4-H Fridays, which include online programming for members around the county, says Rachel Bayer, 4-H extension agent.

And some of the tried-and-true programs that extension and 4-H have retained, like canning and gardening, are gaining overnight popularity during social distancing, Bayer says. “We’re seeing an increase in homesteading subject requests, such as growing locally, knowing how your food is prepared and where its coming from,” she says.

There are now clubs meeting in many parts of the City of Frederick. “Many of our families are from ethnically diverse homes, and meetings are at buildings that are near public transportation,” Bayer says.

“4-H in cities is growing, as agriculture is becoming a smaller sector,” Spurrier noted. The Robo-Rangers club he has coached meets at the Frederick County Extension Office off Montevue Lane. “4-H is shifting to address more urban populations.”

The organization is constantly looking at new recruiting strategies to reach the growing demographic such as social media and other new forms of outreach. “We face the same challenges as many peer youth organizations have,” Bayer says. “We have six million kids but overall its stayed flat for the last 15 years, and it’s a reality check; we’ve had to adapt in-person learning to online modes, and the fact that the work continues with the COVID crisis indicates the value of us making that shift to belong in today’s world.”

Engaging kids with new programs that appeal in today’s world is the key to the success of Rick German’s Alpha Alpacas 4-H club outside Libertytown. In the past 20 years, he’s leased animals to dozens of Frederick County kids, many of whom drive “out to the country” to take care of his animals.

“They learn that animals are necessary for food and clothing; they’re learning where their stuff is coming from, including sheep, wool and fiber,” he says. “And they often have to teach their parents, who don’t know the difference between emus, llamas and alpacas.”

At the beginning, he also had to educate the managers of the State Fair, where most 4-H members aspire to show their animals alongside The Great Frederick Fair. “It took me seven years to convince those people at the State Fair to give kids a chance to show alpacas,” he says.

He leases his animals to the children for $1 per year, German says. “The kids do the work; when we go in to herd the animals, I don’t go in, the kids do, and they teach each other how to do it,” he says. “I am there to oversee and advise.”

The work is so rewarding, he has continued it, even after his own kids “aged out” of the alpaca club and now have small toddlers of their own, who are waiting to join his club. Without leasing programs for kids with small, or no yards, “suburban kids wouldn’t be able to directly participate in any of 4-H’s agricultural programs,” he says.

And along the way, the kids not only learn about where their clothing and food come from, they learn values such as responsibility and caring for their animals—an important skill that urban kids can access through the club. It always comes back to learning deeper lessons than caring for animals, robots or learning archery, when German, Spurrier and other adult leaders talk about 4-Hs endurance over decades.

“It’s not all cookies, cakes and canned peaches anymore,” says Elizabeth Thackery, a lifelong 4-H member and now an adult leader of the Robo-Rangers. “It’s the values.”