Weddings With a History 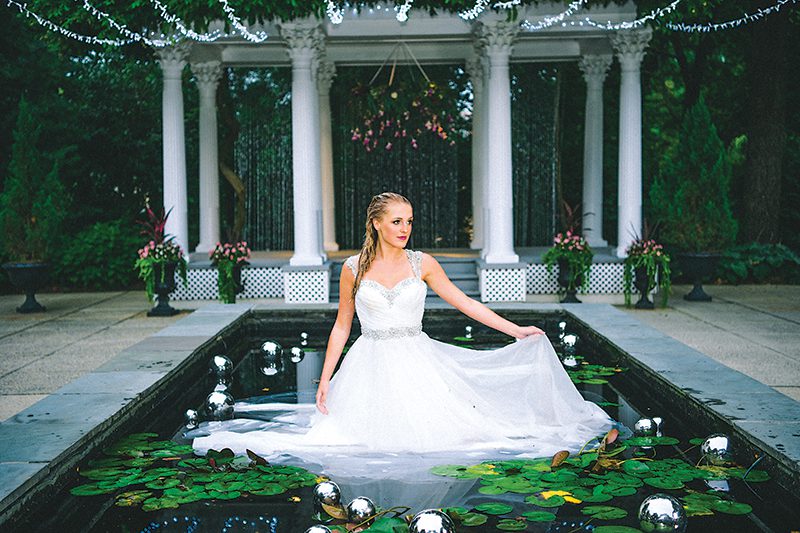 Big Days that Celebrate the Past and Preservation

Simple but charming, the Dahlgren Chapel rises above Turner’s Gap in a clearing next to the Appalachian Trail. This little stone structure checked all the boxes for Rachel and Joshua Lawson in their quest for a quaint, offbeat place to get married.

The couple, who had recently moved to Myersville, stumbled across the chapel at the peak of South Mountain on a drive through the area a few months before their 2019 wedding. They knew it would be perfect as a picturesque, rural setting for their wedding.

“I wanted an older church or a chapel,” Rachel Lawson says. “The Dahlgren Chapel is pretty much all original, with beautiful floors. You walk past a field of wildflowers, depending on the season, and across the Appalachian Trail to get to this little church. There’s this little path for you to walk on. It’s definitely an intimate setting.”

Frederick County is known for its history, and what better way to celebrate upcoming nuptials than in historical fashion? Especially in this region rich with ties to the past. Whether it’s the rural delight of the Dahlgren Chapel, the elegant sophistication of Ceresville Mansion or Stone Manor Country Club, or the folksy charm of the Gambrill State Park Tea Room and many other locations, couples have no shortage of options.

The venues offer couples something unique. The historic Dahlgren Chapel sits along the Old National Road, the nation’s first highway. Ceresville Mansion, nestled between the City of Frederick and Walkersville, dates from the late 19th century, offering indoor elegance or outdoor charm for the wedding ceremony and a ballroom with enough space for a sit-down dinner of up to 170 guests.

Another historic venue is Stone Manor Country Club. When it was built in the Middletown Valley in 1755, the sprawling mansion was a simple country farmhouse. Today, it has been renovated and expanded, but the original rooms are still there.

The Gambrill Tea Room is perfect for a small wedding and reception, with a full kitchen available to caterers, a cozy fireplace, expansive porches from which to breathe the pine-scented air and numerous outdoor photo opportunities.

The chapel was completed in 1884. Madeleine Dahlgren, a wealthy and well-connected Washington widow, owned the present-day Old South Mountain Inn as a summer home. She had the chapel built as a memorial to her deceased husband. A devout Catholic, she planned to use the chapel to worship while staying at her mountain retreat.

The English Gothic Revival-style chapel was built with stone quarried from behind the present-day restaurant. The stones formed the 18-inch thick walls and buttresses. When finished, the chapel had 13 hand-painted stained-glass windows, and a rose window in the gallery accessed through the 40-foot-hight bell tower. The chapel is 68 feet long by 24 feet wide. Couples often ring the bell when they are married at the chapel.

The Italian marble altar and marble floors survive today, as do about half of the stained-glass windows. The original walnut paneling still lines the walls, and bracketed and arched walnut trusses support the roof.

Below the main level, there is a crypt, used as a burial spot for many members of the Dahlgren family, including Madeleine Dahlgren when she died in 1898. Wedding guests often visit the crypt, although the bodies once buried there have long since been moved.

The chapel deteriorated for many years, until Richard Griffin bought it in 1960 for $1,000. The Frederick resident was determined to restore the chapel. With the help of local farmers, he cleared the honeysuckle, poison ivy and hornet nests out of the interior. The floors and walls, damaged by water, were repaired. The original bell was located and installed back in the bell tower.

A Boy Scout troop collected pieces of the old stained-glass windows and Jim Russell of Russell Glass Works helped piece together and restore them. The Boonsboro Centennial Committee and Antietam Belles Chapter 31 opened and staffed the chapel for periodic tours.

In 1996, the Central Maryland Heritage League bought the chapel from Griffin. Using funds raised from rental fees and donations, the organization replaced the slate roof, installed new rain gutters and rebuilt the bell tower. From the late ’90s through the first decade of the 21st century, the chapel hosted more than 30 weddings a year. Now, the second generation of heritage league members are hoping to revive interest in the Dahlgren Chapel.

Large shade trees surround the building, and a massive boxwood flanks the steps to the chapel. Across Old National Pike is the Old South Mountain Inn, an 18th-century stone tavern where many couples have their reception. Although Rachel and Joshua Lawson decided to do their reception at home, in a restored bank building in Myersville, they had their rehearsal dinner at the tavern.

“It is a really awesome place,” says Rachel Lawson of the wedding venue they happened upon a few months before her wedding on Aug. 17, 2019.

The wedding occurred on a warm day, so the couple brought in fans to cool the chapel. The Lawsons had 35 guests, although if guests sit four to a pew, the chapel seats 80. Folding chairs can add seating for another 20 to 30 guests.

“It’s really rustic,” Lawson says. “There’s no plumbing.” Martha Gude, who manages the chapel for Central Maryland Heritage League, says some guests rent port-a-potties with hand-washing stations. Those having their receptions at the Old South Mountain Inn direct their guests across the road.

Kirk Denton, president of the heritage league, says the nonprofit is looking into adding a heating system to the building and possibly bathrooms. The building is recognized by Frederick County Landmarks Foundation and is in the process of being designated a historic building by the National Historic Trust.

Rachel Lawson worked with Gude to locate nearby vendors for the ceremony, including an organist to play the chapel’s old organ. Lawson used freshly grown flowers from farmer Jamie Beth Derr in Middletown.

Lawson was impressed with the interdenominational feel of the chapel. One stained-glass window bears a Star of David next to a symbol of the Trinity. The Lawsons were married by a Catholic priest. Gude has a list of officiants who perform weddings, secular or religious, at the chapel.

“It was the ambiance, the romance of the building that appealed to us,” Lawson says.

Just outside of Frederick is a late 19th-century mansion that has its roots in the late 18th century. The original farmhouse was built in 1788 near the Ceresville Grist Mill, later the Kelly Feed Mill. In the 19th century, the grist mill was for a time the most productive in Maryland. When the waters of nearby Israel Creek rose beyond flood level around 1880, the house was ruined.

Edward Shriner moved the house to higher ground and rebuilt it. Ready in 1888, he presented the four-story home, renovated in Victorian style with a mansard roof, as a gift to his bride. “It took eight years to complete,” says Kate Moreland, events director at Ceresville.

That bridal gift is now the site of many weddings, social events and corporate gatherings. The home retains the original chandeliers, the twin front parlors, the molding, the decorative trim, the chair rails, the elegant fireplaces, the built-in cabinets, the intricate paneling, the tall windows and high ceilings.

The old part of the house connects to an expansive ballroom, a 1989 addition that is perfect for receptions that range from an intimate party for 30 to 60 people to a large sit-down reception for 170. Using food stations, the ballroom can accommodate up to 220 guests, although the average wedding has about 100 to 125 guests.

During the hiatus caused by the COVID-19 restrictions, Moreland says staff incorporated some new furnishings and paint to give the 9,000-square-foot mansion a fashionably vintage feel. Rhonda McLaughlin Design is assisting with this work. Salyer McLaughlin is adding new decorative paint touches.

Moreland, who started working at the mansion when it opened for events in 1989, says the staff learned on the fly. “We were renting the building and letting clients bring in their own caterer,” she says. After a year, the staff decided to hire an executive chef. Today, there’s a full kitchen staff.

Wedding consultation and guest coordination are part of the wedding package at Ceresville Mansion. “We do setup, cleanup,” Moreland says. “It makes it easier and cheaper than to get caterer rentals. We care about each individual and each event. We guide them through the whole process.” Couples can choose the flowers, music, photographer and other wedding-day essentials from a preferred vendor package.

“Brides and grooms are busy,” Moreland says. “They don’t have the time to check out three different DJs or photographers. This saves them time and money.”

Ceremonies are often performed outdoors, with the mansion as a backdrop, in milder weather. Weddings in colder weather often take place in the elegant parlors.

The farmhouse that is now Stone Manor Country Club was built in 1755. Today, the house, on Carroll Boyer Road near Middletown, is still surrounded by 100 acres of farmland. Manager Brian Childs says the 8,000-square-foot house offers couples a blend of country elegance and modern amenities.

Stone Manor hosts weddings that range from 50 to 280 guests. “We offer the most beautiful sunsets you’ll ever see in Frederick County,” he says. Weddings are not hurried, either. Wedding parties are given use of the mansion and grounds for the entire day.

The original German farmhouse is still visible among the additions. Couples usually opt to have the ceremony and reception on the grounds, although some make use of nearby churches for the ceremony. There’s plenty of room for changing and parking. Childs and his wife are on hand to assist each couple throughout the day.

Weddings range from elegant to rustic, and a new ballroom offers a light-filled, accessible, climate-controlled reception area. Childs has overseen over 1,200 weddings in his 14 years at Stone Manor.

For couples who envision a cozy wedding in a woodsy setting, but one that still offers all the comforts of home, the Gambrill State Park Tea Room can be an ideal choice. The Tea Room was built in 1939. According to Mark Spurrier, manager of Cunningham Falls and Gambrill State Park, “It was built in the Civilian Conservation Corps’ rugged natural style. These structures were simple in design using the natural resources in the area.”

The stone features in the building were made from locally quarried stone, and the timbers are oak and chestnut. The heavy iron door fixtures were made by hand.

The Tea Room is available from April to October and has been used for decades to host weddings, parties, reunions and meetings. Each year, at least 85 weddings take place at the Tea Room. The building comfortably fits up to 55 people. There’s a kitchen and two restrooms, and tables and chairs are provided.

A large stone fireplace dominates one side of the 19-by-31 Great Room and wood is provided for those who like the ambiance of a fire. A charming stone balcony outside the Tea Room reveals an expansive view of the Middletown Valley. Some guests put a tent over the balcony for extra table space. There’s a playground nearby for kids, and ample room for parking. Spurrier says couples often rave about the glorious autumn views and the crisp mountain air.

Some even choose to have the ceremony on the balcony. The Tea Room has been making wedding memories in Frederick County for decades, and is one of several venues that can provide couples and their guests a taste of the county’s historical roots.