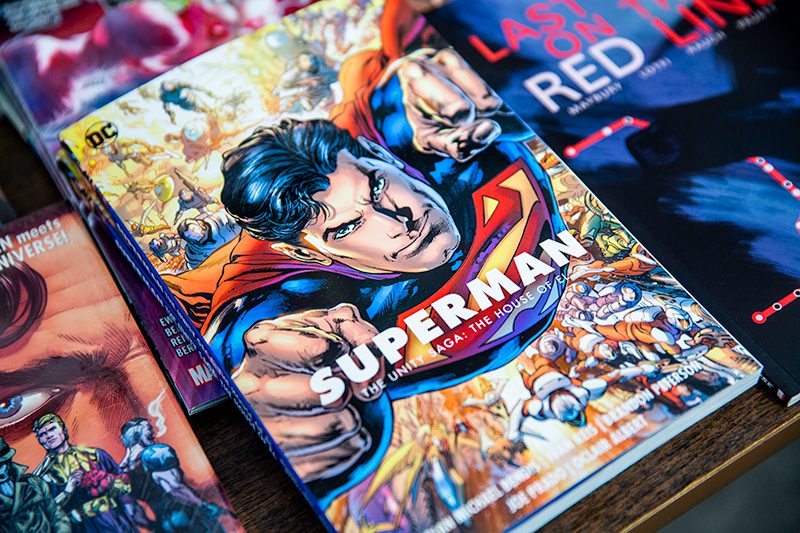 Bookstores Offer Something For Both Fans and Collectors

Do you know any comic book enthusiasts? If so, please refrain from asking them whether they prefer Marvel or DC. It is not a question. You are likely to get either a dismissive eye-roll or a long-winded dissertation about the relative merits of each brand. Either way, you are showing that you just don’t get it. Most avid comic book readers grasp there are just different strokes for different folks.

Fans of various universes and genres rub elbows at several local comic book shops. The owners understand their customers’ preferences and provide spaces for them to gather. The newbie and the long-time collector are warmly welcomed.

John Frazier owns and operates Brainstorm Comics. He has two stores, one in Downtown Frederick and the other in a spacious former neighborhood grocery store in Walkersville. A collector himself, he knows quite a bit about comics. He started collecting when he was a teenager and worked at Brainstorm for its previous owner. After graduating from college and working for a few years in the banking industry, he bought the business and expanded the inventory. Every Tuesday he drives to Baltimore to pick up books from his distributor. Wednesday is new comic book day, and his customers come by to pick up the latest titles.

“There is a wide array of people. No single stereotype,” Frazier says when describing his customers. “They are doctors, lawyers and school kids. They are the people you work with and they live next door to you,” he says. His Walkersville shop is only a block away from the high school. He is confident this new location will be good for growing his business.

He says his customers range in age from 10 to 60. The majority of them visit the store to pick up comics and games. “Sales are 90 to 95 percent in-store,” he says. The rest are online. He says he plans to expand his online sales with a goal of pumping them up to 20 to 25 percent. But he prefers seeing his regular customers, putting requested items aside for them and making suggestions for new titles or games. Frazier is like the human equivalent of the Amazon algorithm that makes suggestions based on past purchases. He says his insights into customers’ preferences are better because, “You get to have a conversation, one-on-one.”

The store features all varieties of comic books, board games, cards and online games. His customers make their purchases in the front of the store and many of them head to a spacious back room to play. Many regular customers come in on designated afternoons or evenings to play Dungeons and Dragons, Magic: The Gathering and other role-playing or story-telling games. “People are social animals,” he says. “They feel connected to one another.”

Across town on Buckeystown Pike, John Cohen owns and operates Beyond Comics. He has a second store in Gaithersburg. He also provides comics and gaming and he specializes in collectible statues. These are high-end items priced anywhere between $150 to $700. If you are looking for lower-priced action figures and toys, you can find them, too.

Cohen is also a long-time collector who has loyal customers. He is slightly amused by the attention that comics seem to get when a new blockbuster movie comes out or a television series is launched based on familiar superheroes.

“The people who grew up with comics don’t understand why everyone else is interested in them now,” he says with a laugh. “The public was aware of the superheroes like Batman but not aware of Watchmen, Stumptown or The Umbrella Academy” until television and movie producers take them mainstream.

Cohen says, “We consider comics just like books. We always emphasize we are a bookstore.” He points to the graphic novels that he stocks. These are thicker compilations of stories that cover any number of fictional or nonfictional subjects in a comic book format. March, an autobiographical account of U.S. Rep John Lewis’ life and work in the civil rights movement is an educational graphic novel that made it to the New York Times Best Seller list. It comes in three volumes.

Other than the pure joy of reading comics, what makes them valuable? Cohen says older comics that are first runs and in good shape are always of interest and may be worth some money. The first appearance of a new character in a comic will drive its popularity and value up. A number of collectors purchase such items and resell them on eBay. Cohen certainly welcomes those collectors and understands their business drive, but adds, “We also want customers who want the products because they enjoy them.”

He describes his customers as, “Everyone. Age is not restricted. We get adults and kids.” He says some families enjoy reading the Japanese-style Manga books together. They come in all genres including action, adventure, historical, science fiction and fantasy. While the majority of his customers are male, he says women are also drawn to the store and its products. He claims that about 30 percent of his customers are female, disrupting the stereotype that comic readers are only males. Frazier and Cohen attribute the growth of the female customers to the industry’s efforts to create new characters and storylines depicting strong female characters.

They point to Ms. Marvel, a Pakistani-American superhero named Kamala Khan, who can extend her limbs, alter her appearance and shift her shape in several ways. Another new-ish arrival is Naomi, a young, black teen who doesn’t don a mask or cape. She wears cargo pants and a bomber jacket as she goes about investigating the appearance of a super-powered person who landed in her hometown. She believes her investigation may give her clues to her own origin. Frazier says young girls follow the adventures of these characters, and boys buy the books, too.

Brainstorm Comics and Beyond Comics draw from the same pool of customers, but the two businesses are not engaged in an epic battle for market domination. Frazier and Cohen both build their businesses by word of mouth. Satisfied customers bring in friends or family members who share their comics or gaming hobby. Both stores rely on their websites and social media pages, too. Frazier shoots short videos in his store and posts them on YouTube. He also finds new customers at conventions like Frederick’s Comicon.

Wes Cochran is a Frederick resident who shops in both stores. “I like comics and I like to shop local,” he says. While browsing in Brainstorm’s Walkersville shop on a recent afternoon he says, “They have a great selection here.”

But Cochran will check out Beyond Comics’ inventory, too. He might check out their gaming products. “I’m not hardcore. I dabble in some board games,” he says.

The uninitiated may be taken aback by the rows and rows of bins filled with comics and the shelves bulging with cards, games and action figures at each store. For some, spending some time looking through the old and the new titles is part of the thrill of the hunt. Others may want to go in, find their favorites and go home to enjoy them.“If you can’t find it, you ask one of the employees and they walk you through it. They are great experts,” Cohen says.