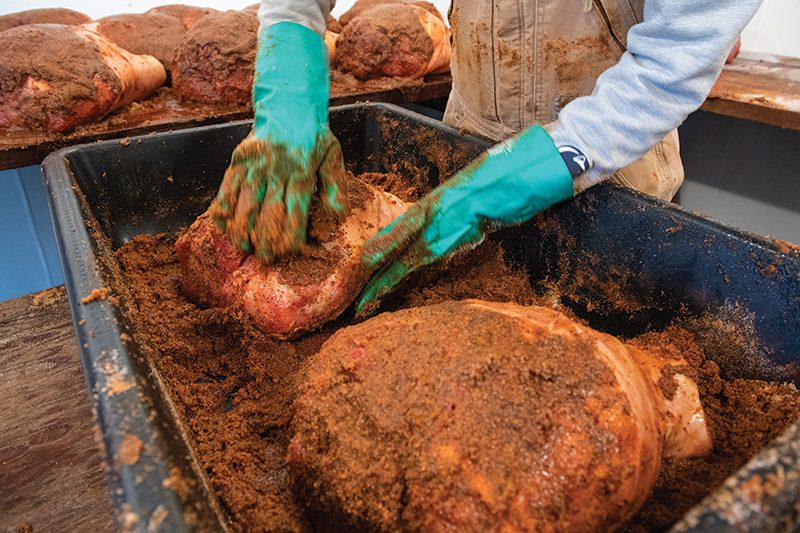 Each year, people in communities around Frederick County gather for hog butcherings, a tradition that has deep ties to Frederick’s farming roots and serves as a modern reminder of a meal’s origins.

The butcherings usually occur in late fall through early spring, but the meat they produce helps keep food on the table throughout the year. That meat isn’t limited to pork chops and country ham. Those are choice cuts from the truckload of slaughtered pigs outside the Jefferson Ruritan building in early February. But people also come for the spare ribs and sausage, the lard, the scrapple and the pork loin.

Jefferson Ruritan has two hog butcherings a year and is one of a handful of communities around Frederick to carry on the practice. Ruritan clubs in Burkittsville, Wolfsville, Petersville and Mount Pleasant also have butcherings. (Catoctin High School’s chapter of Future Farmers of America also has an annual hog butchering each February.)

No actual slaughter occurs anymore at community hog butcherings. Back in 1962, when the local Ruritan clubs started butchering hogs twice a year, things were a little different. Hogs came from local farmers and were slaughtered on site. In those days, a hog was shot with a rifle and the meat processing followed.

In 1968, regulations changed and hogs had to be inspected, according to Ruritan member Sam Pearson. Jefferson bought live hogs from the former Burtner’s Meats near Middletown. In the 1980s, when slaughter regulations tightened even more, the club started buying slaughtered hogs from Horst Meats in Maugansville.

The carcasses arrive at Jefferson Ruritan stacked one on top of the other in a refrigerated truck. Wearing heavy-duty aprons, volunteers unload the hogs. This takes place on a Thursday afternoon. Hog butcherings at Jefferson and at the other locations around the county are three-day affairs. All the work gets done Thursday and Friday. Saturday is sale day.

Cutting and processing occurs in a rectangular building equipped with a large kitchen. Massive garage doors line the walls. Some are opened as carcasses are wheeled in. Weighing nearly 378 pounds, carcasses are unloaded one by one from the truck, hauled into the building on metal carts and spread out on a long wooden table to be sliced.

Volunteers use sharp knives to cut into the hog’s back and remove the spare ribs and a soft, meaty area known as chime. They slice into the hog’s shoulder and cut off hunks of flesh; those are tossed into metal buckets and carried to an adjacent table, where fat will be pared away and the meat is seasoned and ground into sausage.

About 25 volunteers stand on either side of the long table covered with brown paper, slicing the fat from the flesh. As they work, they plop the fat and meat into separate metal tubs. The meat is then inserted into a large metal grinder, the start of the sausage-making process. The fat is used to make lard.

Back on the butchering table, the part of the hog just above the hind leg is sliced off to become ham. The hams are carted over to another table where each one is weighed and rubbed with salt. Hams then cure for six to nine months.

The chime is set aside to be packaged as pork tenderloin. Below the ribs is a chunk of meat flanked by bone that will be sliced into pork chops. Behind the ribs is a rind of meat and fat that looks almost square when sliced off the hog. That becomes bacon.

In the kitchen, Charles “Chiz” Summers operates the bandsaw that slices through thicker bones, getting the ribs and pork chops ready for wrapping. “I’m not a meat cutter, but I worked in a metal shop at the National Bureau of Standards,” he says. “I’ve been sawing meat as long as I can remember.”

The bandsaw’s vertical blade is so fast that it blurred as it sliced through bones and meat. Summers stacks the ribs neatly on one side of the saw. He stacks pork chops in a bucket. These will be refrigerated before being wrapped. Summers then turns his attention to a large chunk of bone, which he sliced into chunks to be used in hog pudding, soups, stews, scrapple and sauerkraut. Long strips of fat are set aside for lard.

“I tell people, ‘Don’t talk to me while I’m sawing,’” he says. A few minutes later, as he is maneuvering pork chops through the whirring slicer, another volunteer started to make conversation. Summers sternly shushed him. Summers recalled that in his younger years he would cut the bones using a hand saw. He prefers the electric cutter, but it requires full concentration.

Every part of the hog carcass is used. Watching the sausage getting made isn’t the unpleasant process it’s often made out to be. On this first day of the butchering, hunks of meat are loosely ground and seasoned with salt and pepper. The next day, they will be ground more finely. Some of the sausage is stuffed into a casing made from lamb skin. The rest is set aside to be sold loose. Ruritan member Larry Cassell estimated the club sells 800 pounds of stuffed sausage and 1,200 pounds of loose sausage at each butchering.

Then there’s scrapple. Scrapple is bits of pork meat from just about any part of the pig. The flecks of meat are mixed with cornmeal and flour, spiced with pepper and formed into a loaf. Slices of scrapple are usually pan fried and often served with maple syrup. Scrapple is not for everyone, volunteers admit.

Hams are set onto a separate table. Each butchering yields about 30 hams. First, the hams are covered with a salt mixture. “They have to lose a certain percentage of their body weight in a certain period of time to be considered safe,” Pearson says. “The salt starts pulling water out of the hams almost immediately.”

The hams are cured in a climate-controlled room for 60 days. Then they’re moved into a cool room in the main Ruritan building where they hang for 120 days, after which they’re ready to be cooked. Some will be sliced and fried, others will be sold whole. Stop by the Jefferson Ruritan Carnival in July and try a country ham sandwich, sliced from one of these hams.

Pearson, 73, splits his time between homes in Jefferson and Florida. But he keeps the butchering tradition alive each year. He recruits 30 to 50 volunteers. Some are club members, while others are from nearby Ruritan clubs. “We help each other out,” Pearson says. Pork sales generate about $11,000 each year, while the ham sales earn about $14,000 for the club. The money goes to support community events and scholarships.

And buyers are rewarded with locally raised, locally processed meat.

To learn more about the Jefferson Ruritan’s annual hog butcherings, go to jeffersonruritan.org.