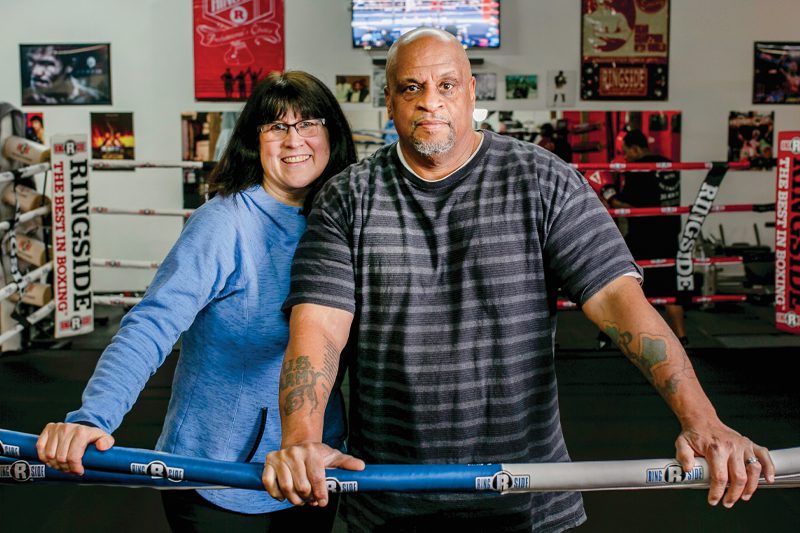 Though it opened just six months ago, Turner’s Boxing Club is already like a second home to John Sayd, Syeece Keitt and Kevin Golden. The three spend much of their free time at the gym, learning the intricacies of boxing footwork, building muscle and core strength while improving their cardio fitness. They’re also learning about other attributes—respect and honor—that are shared by many successful participants.

Turner’s Boxing Club now has more than 40 men, women and youth members. John Sayd, 17, a senior at Tuscarora High School, usually runs to stay in shape. But when he saw a poster advertising the new boxing gym, he was eager to try it. “Not only is it a great workout, it’s almost a lifestyle,” he says. “My grandfather introduced me to boxing.” A Venezuelan native, John came to America a decade ago. Boxing helps relieve any stress in his life. Since he started, he says, “I’ve gotten a lot faster and a lot stronger.”

Syeece Keitt is 12 and a seventh-grader at West Frederick Middle School. It was his mother who suggested he check out the new gym. He had boxing lessons previously and took to the sport as a young boy. “He’s real disciplined,” says Gonzell Turner, who owns the gym along with his wife, Debbie. “He comes in nearly every day.”

Kevin Golden is 19 and comes to the gym almost daily for fitness and skills. “It’s always good to be able to take care of yourself,” he says. “This sport takes a lot of mental fortitude.” Boxers need to be aware of all that’s going on around them, he says. They need to be light on their feet, moving quickly while at the same time strategically throwing punches.

“I like sparring,” Golden says. “When I first sparred, I was scared, but I learned how to control my fear and grow more confident and controlled.” Boxing is chaotic and stressful, he says, but that’s helped him to grow. Practice also helps. “The more you do, the better you get.”

An introvert, he says boxing is a way to fill his free time with something productive. “Boxing is doing it for me,” he says. “I was bullied when I was young-er, and that sticks with you. It’s nice to know you can take care of yourself.”

Gonzell Turner, 61, retired last year from a career with the Department of the Navy. He has been boxing and coaching for much of his life and has been registered as a coach with the U.S. Boxing Federation for five years. But he began helping people learn to box many years before that. As a young Army recruit, he boxed competitively and then he found his niche in coaching.

Turner spent his early years in Washington, D.C. His father was killed when he was 7 and after that he became determined to do good things with his life. He learned self-defense and used it to help others. “I took up for a lot of kids,” he says. “I could fight, but I never liked to see kids getting bullied.”

He says boxing is as much about technique and strategy as it is about fighting your opponent. It’s also about respect for people, he stresses to newcomers.

Turner’s Boxing is in a converted warehouse that gives the gym a “rustic look,” using Debbie Turner’s words. Clean white walls with red and black accents surround the gym. The floor is slate gray. In the center is an 18-by-18 boxing ring. Getting rid of the warehouse grime took some effort. “We spent two months cleaning the ceiling,” she says. Work started last June and lasted through the summer.

There’s an area for cardio, including some exercise bikes. There are numerous punching bags, some hanging and some mounted on a wall. Speed bags help a boxer develop speed and coordination. These swing rapidly, forcing Turner’s athletes to have speed and coordination, along with good reflexes, in order to hit the bag repeatedly.

Other bags have differing weights, and some are filled with water. Wall-mounted bags help with punching technique. Water bags help to build up knuckle strength and resistance. The first and second knuckles bear the brunt of a boxer’s punches. Repeatedly pummeling bags of different weight and size helps not only to build up the knuckles, but also to throw different punches.

Boxers go from jabs to uppercuts, all while “floating like a butterfly,” in the words of the immortal Muhammed Ali. A “slip under” rope about hip high is strung above a mat. Ducking under it repeatedly teaches boxers to evade an opponent’s punch. A swinging bag also helps teach the art of ducking punches.

There’s also a weight and core strength area, with rows of hand weights. Machines help build leg and core strength. Colorful jump ropes hang from racks to help with core, balance, cardio and stamina. Boxers sparring in the ring move their feet continuously for three minutes. In practices, boxers spar for three rounds with 30 second breaks after each round.

The gym feels busiest from 3 p.m. to 7 p.m. Music thumps, ropes slap the floor and fists pound padded bags. Jovi Osborne, 16, a junior at Tuscarora High School, is a Turner regular. “I’m learning every day,” he says. “I didn’t like to work out before but now I do.” Going to the gym has built up his confidence, he adds.

Bobby Kayode is one the gym’s adult members. He’d been searching for a gym devoted only to boxing for several years and found what he was looking for at Turner’s. He goes to the gym nearly every day after work and on weekends.

Boxing is like life, he explains. “You’re always learning.” He started boxing as a young boy. He moved a lot, and boxing gave him a home. “It’s an individual sport that pushes you to your limits,” he says.

Respect is one of the first principles boxers learn. “We have a swear jar,” Gonzell Turner says. Members pay a dollar per swear word. “You have to be real humble,” he says. “Everyone leaves here with a fist bump.”

No one spars until Turner thinks he or she is ready. (About 20 percent of Turner’s members are female.) Sparring gear includes thickly padded helmets and gloves, the same type of safety gear amateur boxers use in the competition ring.

The Turners have filed paperwork to form a nonprofit organization. Turner’s Boxing Club and Youth Development Program aims to help kids with anti-bullying training and mentoring.

“This is his dream,” Debbie Turner says about her husband. “This has been his dream for years. This is an outlet to help kids.”