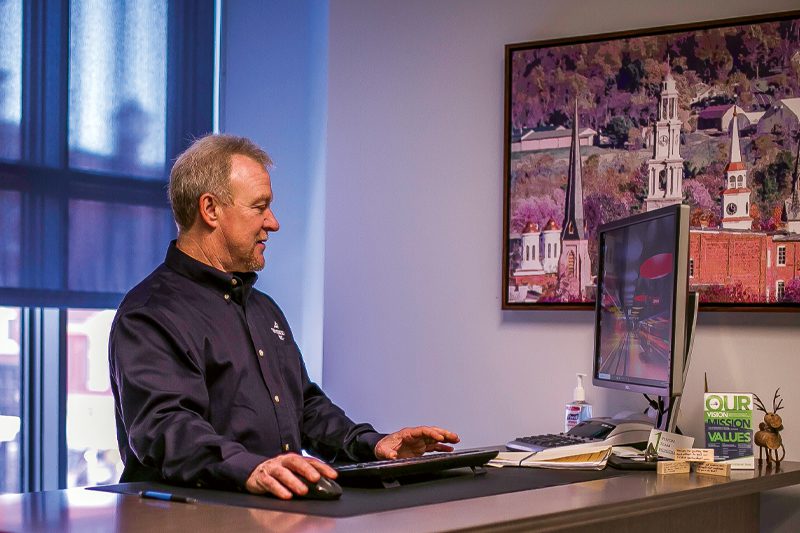 When Common Market decided it wanted to expand and open a second location in the former Safeway store on 7th Street in Frederick, general manager Bob Thompson started to investigate financing for the project.

He talked to a large regional bank as well as the National Cooperative Bank in Washington, D.C., and Frederick County’s Woodsboro Bank. In the end, Thompson says the business might have saved “a few pennies” by going with the larger banks, but ultimately chose to stay local. “We’ve had a banking relationship with Woodsboro Bank for at least 30 years,” he says. “They know the area, they know the community. They really get it.”

That made a big difference when the appraised value of the Safeway site did not fit into the required lending formulas of the larger, out-of-town financial institutions. Thompson says Woodsboro Bank knew what the property value was, both on paper and in terms of its potential given its location on the edge of the city’s historic district Downtown and the ever-expanding Frederick Health Hospital.

“We certainly consider each client’s financials in our lending decisions, but we also look beyond their balance sheet and income statement,” says Steve Heine, Woodsboro Bank’s president and CEO. “We have the local knowledge of the character of the market that you may not get by just reading a piece of paper.”

When Woodsboro Bank opened its doors in 1899, it was one of several community banks that served the residents, farmers and businesses of Frederick County.

But independent community banks like Woodsboro Bank are rapidly disappearing. Between 2001 and 2019 alone, there were 557 bank closures in the United States, with most of them occurring among smaller banks. Last summer, Frederick County Bank merged with ACNB Bank of Pennsylvania and is now known at FCB Bank, a Division of ACNB Bank. That merger means that Woodsboro Bank and Middletown Valley Bank are the only two locally based banks remaining in the county.

Interestingly, three years ago, the two institutions flirted with a merger, but in the end they decided to continue to operate separately. “Our shareholders enjoy being independent,” Heine says, noting that many of the bank’s initial shareholders’ families are still in the area or have a stake in the community.

Over its 120 years, the bank has survived the stock market crash of 1929 and ensuing Great Depression, 1987’s Black Monday and the Great Recession in 2008. To achieve this feat, its management has had to balance the challenges of risk and reward. “Bad loans represent the quickest way for banks to go under,” Heine says. “But you also have to take risks to grow.”

That is why Woodsboro Bank decided in 1995 to add commercial banking to its service line. The Small Business Administration reports that community banks provide almost 50 percent of all small business loans—and small businesses comprise 98 percent of the Frederick County economy. Today, two-thirds of Woodsboro Bank’s book of business is commercial, with the other third representing individual households.

Last year, Woodsboro Bank moved its commercial lending operations to a very contemporary, yet historic, space on East 2nd Street Downtown. With its exposed brick walls, soaring ceilings, industrial duct work and open-concept meeting and gathering spaces, it is a thoroughly modern space in a 160-year-old building. “We like to think that this space reflects who we are,” Heine says. “We are steeped in history but as modern as any bank there is. We think of ourselves as a 120-year-old start-up.”

Look Them in the Eyes

As a custom homebuilder, Mark Lancaster has dealt with his fair share of bankers over the years. But he says one of the reasons he continues to work with Woodsboro Bank is because he appreciates the fact that he actually knows the people to whom he entrusts his money. “In the old days, you and your banker could look each other in the eye and you could tell if you could do business with them,” he says. But how do you do that when your banker is 150 miles away?

Over the years, Lancaster has met and volunteered at various Frederick County events alongside many employees from Woodsboro Bank. “I know they are honest and dedicated to providing great service—to their clients and the community.”

For Heine and his team, that is a high honor, and one they take seriously. “People understand that because we are a local bank, our decisions are made here—not in Charlotte, not in Philadelphia,” he says. “And I know that there are implications when we say ‘yes’ and when we say ‘no.’”

While larger institutions may only be concerned about the bank’s risk, Heine says Woodsboro Bank is interested in the risk to both the bank and the borrower. “We want to make sure that if you are borrowing money, that you need to borrow it,” he says. “That’s why we take the time to understand our clients, their businesses and their motivations.”

For Common Market, the motivation for opening a second location was simple: “As a co-op, we believe in local, but we have to compete,” Thompson says. Its new $14-million investment in the College Park Plaza shopping center will feature more than twice as much square footage as its existing store on Buckeystown Pike. That means the co-op can offer new features and products designed to help it compete against the likes of Wegmans, Giant Eagle and others.

“We are going to evolve into something more eclectic,” he says. And in the process, Common Market expects to create upwards of 90 jobs and will also transfer its corporate offices to the new location.

That’s a significant investment in the local economy, which is another reason why Woodsboro Bank was happy to support the project. “We have a vested interest in our community so we continue to invest in the business and credit needs of this market,” Heine says.

Instead of relying simply on lending algorithms like many large institutions do, Woodsboro Bank looks beyond those mathematical calculations to the nuances of the local landscape and what Heine calls “human factors.”

“We know our community—who lives here and what they value,” Heine says. “That’s why we’re still here after 120 years.”