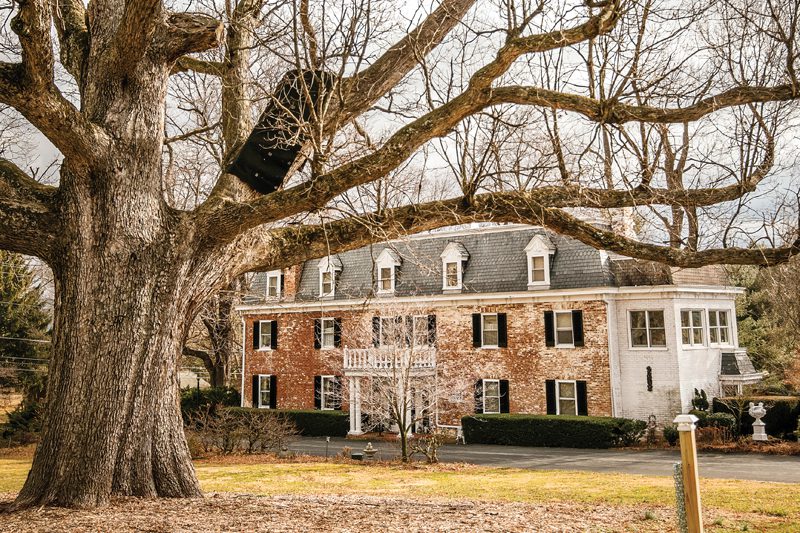 Historical buildings rarely match the purity of a fine wine or famous symphony, which are left mostly untouched after creation. More likely, a home or other structure built long ago has been renovated, restored and altered, leaving something that could look far different than its original design—but still beautiful, complex and lyrical nonetheless.

Such is the case with Marameade.

In 1792, a German immigrant named Christian Koogle built a small brick farmhouse next to a relatively young white oak, about two-and-a-half miles northwest of Middletown along the path that would become part of the National Road. Today, that same tree welcomes visitors to the graceful homestead that has grown to 18 rooms and spans 7,000 square feet.

The home, surrounded by 15 acres, is the family gathering place for Molly Wilson and her clan of children and grandchildren. The enormous oak tree is one of the first things visitors see when pulling into the round driveway west of the house.

Wilson and her husband, Bill, bought Marameade in 1992. They planned to use it as a weekend retreat from their busy jobs in Washington, D.C. But with Bill’s retirement approaching, the Wilsons decided to make the house their permanent home.

Bill, a Civil War buff, often gave talks to local groups about the house and its role in the war before his death in 2014. Marameade served as Gen. George McClellan’s headquarters on Sept. 13 and 14, 1862, during the Battle of South Mountain and on the eve of the Battle of Antietam. From the back of the house, McClellan could see Fox’s Gap, Turner’s Gap and Crampton’s Gap, integral fighting spots during the South Mountain battle.

Bulbs enliven the landscape in spring and perennials flower in summer. Dozens of fruit trees bloom each spring and bear fruit from summer through fall. Wilson plants greenery and colorful annual flowers in numerous terra cotta pots around the patios and porches. In fall, the leaves of the white oak, estimated to be about 300 years old, turn bronze. The perimeter of the massive trunk measures 17 feet around.

A peaceful pond is a few steps from the patio. When the Wilsons first moved here, a resident goose that belonged to the previous owner stayed on for another five years. Various geese sculptures are a memorial to the bird.

The name Marameade has been attached to the house for the last 50 years. It was chosen by Connie Stapleton, Marameade’s owner from 1967 to 1982. Mara is short for Maryland and “meade” has Old English origins that translate into meadow. But changes have been a part of Marameade since the home’s early days.

Once strictly a farmhouse, it resembled many of the German-style homes built throughout the rural Middletown Valley in the late 18th and early 19th centuries. “The original bricks are primitive looking, like they may have been made on the property,” Wilson says. Bricks added in later additions look more professionally made, she says.

The house originally had only two or three rooms. But as the Koogle family grew, so did the house. In 1829, Christian Koogle’s sons, Daniel and Adam, built a back addition, with outdoor galleries, or porches, on both floors. The addition and galleries extended to the rear of the house, giving the house an L-shaped appearance. The Koogles owned 137 acres, and their farm included land on both sides of the National Road, now Old National Pike.

By 1894, the Koogle family sold the farm to Henry Irving, a nephew of author Washington Irving, as a weekend retreat. It was Irving who altered the home’s traditional farmhouse look by adding a mansard roof. Even today, this roof style gives the house its distinctive appearance.

After Irving died in 1903, the house was sold several times, and most of the farmland was bought by neighboring farmers. In 1949, Russell Hinds bought the property to use as a turkey farm, building a coop and slaughterhouse behind the main house. Those buildings have since been converted into apartments that Wilson now offers for rent.

In 1957, Norman and Jane Snook established Valley View Nursing Home on the property. The Snooks lived on the third floor of the main house since Irving’s mansard roof had converted the attic into a living space. The numerous bedrooms on the second floor, along with the chicken coop and slaughterhouse, were converted into patient rooms.

Stapleton, a writer and single mother, bought the house in 1967 and raised five children there. She became known for her bartering abilities and, along with Washington Post food editor Phyllis C. Richman, wrote a book titled, Bartering: How to Get Almost Anything Without Money.

She enclosed the house’s galleries on both levels, converting the porches into hallways. Stapleton created a farmhouse kitchen using reclaimed materials, and there she hosted dinner parties well-known in Washington circles. Her gatherings and reclaimed kitchen were the subject of a 1981 Bon Appetit article. Stapleton was one of the founding members of the Frederick County Landmarks Society, and Marameade is listed on the Landmarks registry.

Stapleton moved out in 1982. Two years later, Helen Collins bought the house and turned it into a bed-and-breakfast. Collins converted the existing kitchen into a commercial kitchen, but vestiges of the farmhouse look remain. A fireplace, built from old fireplace bricks, is now a cozy nook off the kitchen. The fireplace had to be walled off from the kitchen in order for the commercial kitchen to meet the building code.

Wilson would like to convert the kitchen back to its farmhouse look, but other parts of the house have required attention. The house has needed a new roof and furnace in the years since she and her husband bought the home. “When you own an old house, you replace or update everything,” she says. The house now has seven heating zones, which help control utility costs.

The couple removed layers of paint from the bricks, restoring the house to its original red brick look. Porticos on the front and side of the house welcome visitors. Occasionally, descendants of former owners visit and add information to Wilson’s historical files on the property.

The house may be large, but it has a homey feel. Visitors enter today from the side portico, nearest the driveway. The foyer was part of the original house. Today, it’s filled with bookshelves and comfortable furniture, perfect for reading. Just beyond that room is a garden room with large windows that offers tranquil views of the pond, the topiary and the fields behind the house.

The dining room has a table large enough for Wilson’s five children and a brood of grandchildren. Holiday gatherings in the house are lively affairs, and one of the reasons the Wilsons bought the house.

Nine-foot ceilings give the house a feeling of grandeur. A main staircase between the two front rooms climbs at what Wilson described as “a gentle angle.” At the landing is a faux tall clock, painted to resemble the grandfather case clock that once stood at the top of the stairs.

The house’s walls, at least a foot thick, help to shield out noise from Old National Pike, even as traffic whizzes by.

Upstairs are rows of bedrooms where Wilson’s children and grandchildren stay when they visit. Many of the bedrooms have attached bathrooms from the house’s days as a B&B. A sprinkler system added during that time still protects the house.

The bedrooms all have brass nameplates from the B&B days. The Wilsons intended to remove them but found it easier to call each room by its B&B name than keep all the bedrooms straight.

When grandchildren visit, they love to use the back staircase that leads to a closet near the kitchen. Another back staircase, this one a circular staircase added as a fire escape during the B&B era, leads from the enclosed rear porch into a tiny nook. The porch is full of potted plants that Wilson overwinters inside, giving the room a greenhouse feeling.

Between the house and the apartments are several outbuildings. The Wilsons converted an old outhouse or smokehouse into a garage. There’s also a corn crib and a wagon shop, which now serve as storage areas. The remaining farm fields are leased to neighboring farmers. “This was a proper working farm,” Wilson says.

About the only thing that hasn’t been changed is the oak tree.