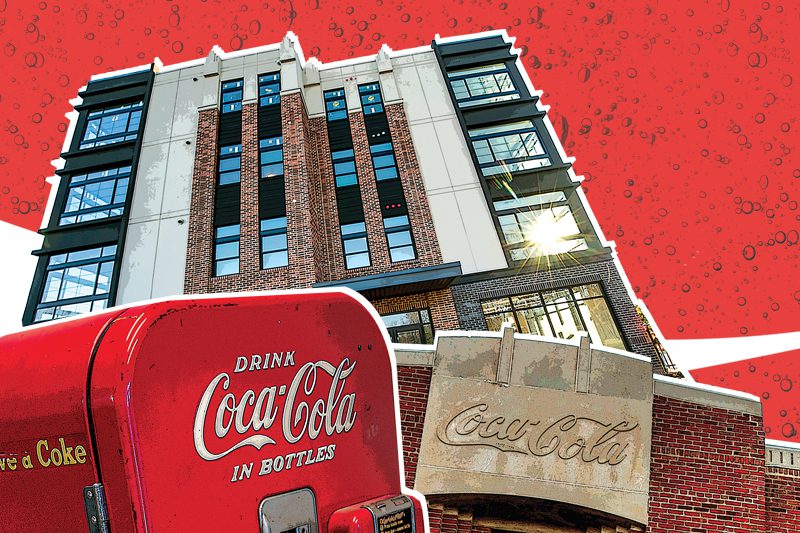 Standing like a sentinel on the north end of town for 73 years, the familiar cursive script cast in stone above the front entrance, the old Coca-Cola bottling plant on North Market Street isn’t just a local landmark; it’s a touchstone to a simpler time when Coke came in six-and-a-half-ounce bottles and Frederick was still a small town. “I can remember going to those big windows and watching the bottles go around—lots of people did,” says Deb Moler.

But while almost every Frederick native has memories of the old Coke plant, Moler’s connection is richer than most. She practically grew up in the building. Her father, long-time plant manager Carroll Huffer, was only 20 years old when he went to work on the bottling line in 1947 and retired from the company 42 years later. “He was a company man,” says Moler. He lived, ate and slept Coca-Cola, and if we went into a place and it didn’t carry Coke, we turned around and left.”

“Back then you started on the ground floor and just worked your way up,” says Huffer’s long-time friend and co-worker Don Wyand, who joined the company in 1955. “The first day I started, I went along on a route with him. He was a route supervisor then. We had ten routes out of there back in ’55. We covered Frederick County, upper Montgomery County, upper Loudon County and Howard County out to where the fairgrounds are.”

Created in 1886 by John Pemberton, a Civil War veteran whose wartime wounds left him addicted to morphine and seeking an alternative stimulant, Coca-Cola was first marketed as a patent medicine and temperance drink (despite the fact that it contained trace amounts of cocaine until 1903). Atlanta entrepreneur Asa Candler bought Pemberton’s formula in 1892 and made Coca-Cola a staple of soda fountains across the South. Bottled Coca-Cola didn’t become common until 1899, after a group of investors from Chattanooga, Tenn., bought the bottling rights for a mere dollar (which, according to Coke lore, Candler never collected).

Legend has it that Candler let the rights go for next to nothing because he didn’t think bottling had a future. But with near-exclusive rights, the Chattanooga bottlers divided their territory and sold licenses to an array of local bottlers who added sugar and carbonated water to the syrup concentrate bought from Candler’s original company. The franchise model proved such a success that, as early as 1909, there were already more than 300 bottling plants across the country. Sales got a boost in 1916 with the introduction of Coca-Cola’s distinctive contour bottle. By 1928, bottles outstripped soda fountain sales for the first time.

By then, Frederick’s first bottling plant was 4 years old. “Originally, they were down on East Patrick Street,” says Wyand. Built in 1924, the building later become the longtime home of Horne Electric and currently a party store. But, just 23 years later and with Frederick’s young men returning from overseas, demand had exceeded the original plant’s capacity. The owners, Central Coca-Cola Bottling Company, Inc.—a regional bottler based in Richmond, Va., and also operating in West Virginia, Pennsylvania, Maryland and Ohio—bought a wedge of property between Market Street and the Pennsylvania Railroad tracks and opened a new plant in 1947.

Built to a design by the Takoma Park-based firm of Davis & Platt, the building’s art deco detailing was standard across the Central Coca-Cola’s facilities (bottling plants in six other locations are virtually identical to Frederick’s). The 16-foot high coke bottle that long graced the roof didn’t come until the mid-1960s, though. “They said it was from one of the World’s Fairs,” says Wyand. “The cap came off one time and the hook-and-ladder—United [Steam Fire Engine Company #3], I guess it was—came out and put it back on.” And one group of senior pranksters from neighboring Governor Thomas Johnson High School made the oversized bottle disappear one night, too, covering it in a sky blue tarp. “The class of ’67, they got up there somehow. It made the paper and everything,” says Moler.

For 61 years, the trucks rolled in and out of the North Market Street plant, but for the two dozen or so employees there was little turnover. “People didn’t come and go, they were dedicated back then,” says Moler. “It was truly a family.” Says Wyand. “Back when the [Francis] Scott Key Hotel was still open, we’d go down there and have a big Christmas party with all the spouses and the sons and daughters and Santa and presents for the kids.”

The world was changing, though, and so was Coca-Cola. “It became more corporate, it kind of lost something,” says Moler. The introduction of non-returnable bottles and cans made larger plants and long-distance trucking more efficient and, with Coca-Cola’s encouragement, the bottlers began consolidating. The Frederick plant ceased bottling in 1979, becoming a warehouse and distribution center before shutting down entirely in 2008. “They moved the great big bottle and all the operations out to Hagerstown,” says Wyand.

Carroll Huffer, Don Wyand and most of the other old-timers had retired by then—but they continued to get together. Huffer, according to Moler, “didn’t want to give it up, so they started having Christmas parties for the retirees and now it’s trickled down to the kids.” The annual gathering became a chance for Frederick’s Coca-Cola family to keep in touch, relive the old days and mourn those who’ve passed, like Carroll Huffer, who died in 2017.

But this past Christmas, when former employees and their families held their annual get-together, the room was buzzing with anticipation. A group of developers from Virginia and Washington, D.C., were breathing new life into the old building.

“My husband and I did market studies of lots of towns in the region and intentionally chose Frederick,” says Virginia resident Tricia Beisler, who bought the building with her husband, Mark, back in 2014. “The math works in a lot of places, but Frederick offers the small town feel, the arts community and the support,” she says, “I feel like Frederick has been moving in the right direction for a really long time.”

It was the market that moved the Beislers to buy in Frederick, but there may have been some serendipity involved, too. “I’ve known Tricia for probably 30 years—we were in a junior women’s club in Leesburg,” says Moler, who moved to Purcellville when her husband took a job with a local accounting firm. But it was only when the Beislers consulted with Moler’s husband, seeking professional advice about the purchase, that they realized the connection. “It’s something how people’s paths overlap,” say Beisler.

For Beisler, her friend proved a treasure-trove of information about the building’s past. “She came over and just pored through all the stuff that I have,” says Moler. But history was also an early hurdle that the developers had to cross. “It took two years to look and see if the historic overlay was appropriate and get the zoning changed,” says Beisler.

Ultimately, at the Beisler’s request, the city’s Board of Aldermen declined to put historic overlay restrictions on the property. But preserving the original 1947 Art Deco structure has always been a priority for Beisler, who lives in historic Waterford, Va., and has been active in the foundation dedicated to preserving the 18th-century village that’s been a National Historic Landmark since 1970. “We’ve been longtime supporters of adaptive reuse,” she says.

The zoning issues settled, Beisler brought in Brick Lane Development and Oculus Realty—two D.C. firms with portfolios full of adaptive reuse projects—to both transform the old bottling plant into restaurant and office space and build 83 luxury apartments at the rear of the property. “We took down a portion of the later addition to accommodate the mixed use—the original factory is entirely intact,” says Jeff Gross with Brick Lane. And, in what had previously proved a sticking point with the Historic Preservation Commission, the developers demolished a row of garages behind the main building. “Originally the idea was to build on top of the garages, but they were just in such poor condition,” says David Meit of Oculus.

Now, the partners are putting the finishing touches on the new building, whose design complements, but isn’t a carbon copy of, Davis & Platt’s 1947 original. “There are nods to the Art Deco mixed in with the urban contemporary,” says Beisler. “The goal is to take some of these elements and carry them through the interiors of the new building,” says Gross, citing touches like the Art Deco-style tile in the common areas or the oversized metal-framed windows that lend the apartments an industrial loft-like feel.

Décor will also pay homage to the property’s past. “We have a lot of vintage Coca-Cola stuff,” says Gross. “Jeff and I are having a good time finding it,” says Meit, who’s particularly proud of a mid-’50s vintage Coke machine that they’ve brought back to life and plan to put in the lobby that will serve the office spaces on original bottling plant’s upper floors. “This is from just after the factory opened and would have been contemporary,” says Meit. (Moler has an identical machine from the original plant but has no plans of parting with it. “That’ll go to my daughter,” she says.)

The developers have also commissioned local artist Yemi Fagbohun to create a mural on one wall of the original plant. “The concept is to weave the story of Frederick in with the story of Coke, because the people that worked here were all Frederick [residents] and I’m working some of their portraits into the piece,” says Fagbohun. Says Moler, “He just sent me his rough sketch and it’s so cool.”

But the piece that will tie it all together—indeed, the catalyst for the entire project—is the old bottling plant. “We wanted a restaurant or retail use that would invite the community back in to the space,” says Gross. “We are really close, I would really love to announce it, but the lease hasn’t been signed yet,” says Beisler, hinting that a restaurant will be coming in the near future.

No one is looking forward to that more than Frederick’s Coca-Cola family. “Sadly, Dad’s not seeing this project. He would be so thrilled,” says Moler, “I’m so happy to see this use.”

Don Wyand hopes whoever the new restaurant tenant is, it will be up and running soon, because he and his former coworkers have to start planning another Christmas party. “If it’s open, that’s where we’ll be,” says Wyand, “It’s just like going back home.”