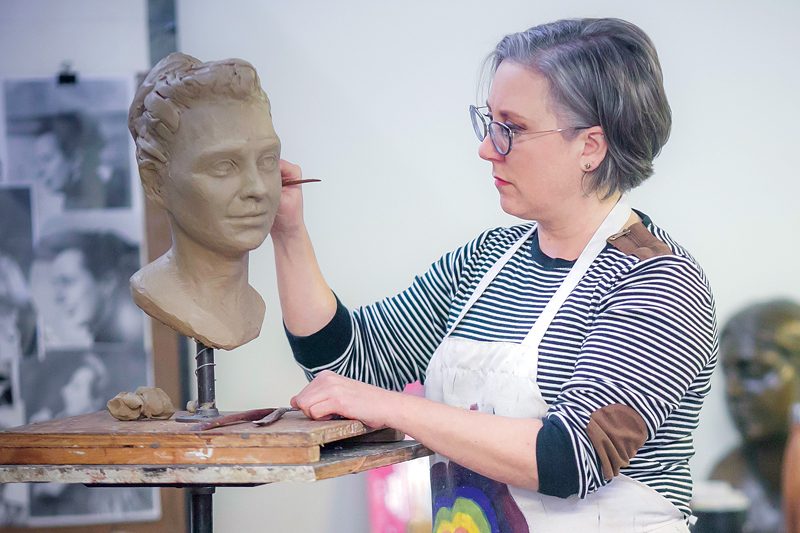 They talk about her like they know her personally. Claire. No last name is necessary. She’s the mid-20th century fashion designer and innovator who gave American women ready-to-wear fashions. And pockets!

Members of the Frederick Art Club are paying tribute to Claire McCardell by commissioning a sculpture of her that will become permanent public art installation along Carroll Creek Linear Park. It will be created by a local artist and will celebrate the woman who freed American women from corsets, crinolines and girdles.

Club members say they admire McCardell’s talent and her business acumen. They recognize that her work from the late 1930s through the 1950s emphasized movement and versatility in women’s clothing. They also acknowledge that her tenacity in a male-dominated fashion industry enabled her to land her name on the labels of her clothing and a partnership in the company that produced them. So, they are preparing to cast Claire McCardell’s influential career and likeness in bronze.

“Back in 2000, Claire was among eight American fashion designers honored with bronze plaques placed along New York City’s 7th Avenue ‘Fashion Walk of Fame.’ What better place to pay homage to her creativity than with a seven-and-a-half-foot bronze statue overlooking Carroll Creek right here in her hometown?” says club president Marilyn Bagel.

It all began when Heritage Frederick made a presentation at the club’s 120th anniversary highlighting the life and work of McCardell. That sparked the club’s interest in creating a permanent monument to her. “We said, ‘She’s in the Smithsonian, The Metropolitan Museum of Art and she grew up blocks away from here,’” says committee chair Linda Moran. “Somebody said, ‘Bas relief is not big enough for Claire.’”

The club determined that a bronze sculpture was more appropriate. A committee is currently raising funds to complete the statue, which will stand near the restored Union Knitting Mills building next to the creek. Club members are halfway to their goal of raising $230,000. “It is compelling that we have a woman of this stature who is definitely worthy of being put in such a position—larger than life,” says club member Marita Loose. “On the creek, near the Mills, there’s a nice hill. Claire belongs here.”

The club is pleased to be breaking the “bronze ceiling” with one contribution toward addressing the dearth of statues honoring women’s achievements. “When it comes to receiving recognition through public art, women have been historically shortchanged,” says Bagel. “Here in Frederick we are doing our part to help break the bronze ceiling when we put Claire on a pedestal where she belongs.”

Claire McCardell was born in 1905 and grew up on Rockwell Terrace. As a young girl she took an interest in fabrics and fasteners, often deconstructing her brothers’ cast-off clothing to see how they were made. She would later bring new textures and materials to women’s clothing. She dreamed of going to New York to learn more about fashion, but her father wanted his only daughter to stay a little closer to home. She attended Hood College for two years, but eventually made it to New York and Paris, where she completed her studies at Parsons School of Design (known then as the New York School of Fine and Applied Art) and Place des Vosges.

“Not content to follow in the footsteps of Paris designers, she created her own innovative style that’s as fashion-forward today as it was when she first designed chic, well-made, casual ready-to-wear clothing and accessories in the ’30s, ’40s and ’50s that revolutionized how women dress,” says Bagel.

McCardell’s innovations included the monastic dress, a free-flowing garment resembling a monk’s cassock that when belted at the waist fit any figure. She created the popover, a simple dress intended to be worn throughout the day and transition easily into evening cocktail parties.

And she collaborated with dance shoe manufacturer Capezio to adapt ballet flats to complement her clothing line. But her greatest innovation may have been marketing “separates,” interchangeable tops and bottoms. “Claire was the first woman to put out separates as a way to wear clothing. Three bottoms and four tops, and you could go from riding a bike to a business meeting to a fancy party,” says Frederick alderwoman and Claire fan Donna Kuzemchak, “One skirt, one pair of fitted pants and one pair of culottes could be matched differently with four tops to let you look good no matter where you needed to be.” Kuzemchak actually creates and wears clothing based on McCardell’s original designs. “I’ve been doing what I call design/build. I figure it out from pictures of the outfits and mix patterns together that I have, to make it look like what she made long ago. I do think the clothing is fun to wear.”

Throughout her career, McCardell received recognition from consumers and business leaders, becoming a partner in Townley Frocks, the clothing company that manufactured her designs. In 1950, President Harry Truman presented her with the Woman of the Year Award from the Women’s Press Club and in 1955 she was featured on the cover of Time magazine.

The statue project is being designed to make a dramatic statement. “To me, the statue on the Creek is like the girl in front of the bull on Wall Street. It’s a beginning of recognition of females who made a difference in the community. I’m thrilled to support it,” says Kuzemchak.

Art club members selected award-winning sculptor Sarah Hempel Irani for the job of creating a bigger-than-life Claire. “This feels incredible,” she says. “Sculpture that we have in our cities is our landscape. It shows us what we value, who our heroes are.”

She says she spent a lot of time reading about McCardell at the Maryland History Museum in Baltimore and at Hood College. She worked with a model with Claire’s measurements and made sketches and took photos to get different angles and poses. She then presented an 18-inch sculpture to the art club for feedback. “I work very collaboratively,” she says.

The final product, slated for completion in 2021, will be a figure of Claire leaning against a dress form. Of course, Claire has a hand in her signature pocket. “Sitting with her image is joyful. I’ve almost become friends with her,” says Hempel Irani. Local firm Kirolloff Design will provide a wayside exhibit to accompany the statue.

The art club continues to accept donations through the Community Foundation of Frederick County and from individual and corporate donors. The organization held a Wild About Claire fundraiser last fall, where models wore Claire-inspired clothing and attendees were photographed next to a cardboard cutout of the designer. This spring it will launch a door-to-door fundraiser in Claire’s Rockwell Terrace neighborhood.

For more information about the Claire McCardell project go to  www.frederickartclub.com.