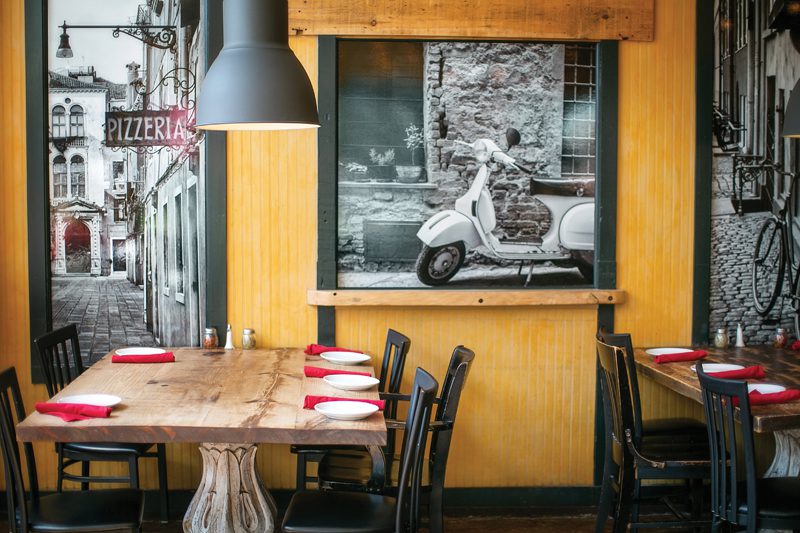 In 2002, the City of Frederick published a Small Area Plan for East Street, noting comparative success stories that focus on mixed and diversified land-use strategies to boost an area’s adaptability. The plan helps guide development in the corridor and recognizes East Street’s role in a range of redevelopment initiatives and public space improvements.

Research also poses that authentic historic character and diverse architecture contribute to a city’s perceived “richness”—two things Frederick has in spades. The sweet spot is finding adaptive uses for properties to preserve both history and productivity. Cities must play a long game, but highlights are coming to fruition. Envisioned as a gateway to Downtown, East Street now links easy access to I-70 with a MARC train station, the Frederick Visitor Center and plenty of retail and dining options.

Looking ahead Griffin says, “We know that people are attracted to authentic neighborhood destinations and East Street has a unique vibe.” Dining options are a proven draw in emerging neighborhoods, luring residents from their homes and visitors from afar. Griffin nods to the community’s earliest champion. “The real pioneer of East Street was Bert Anderson. Back when that side of town didn’t have a lot going on, he cobbled together dozens of properties and renovated them. … He led the way.”

Anderson’s efforts in the 1970s and ’80s transformed two blocks of condemned 18th-century homes and a kitchenware factory into Everedy Square and Shab Row. The complex now boasts more than 30 specialty shops, eateries and services, including plenty of Frederick Magazine’s Best of Frederick winners over the years.

Up the street, Pistarro’s Ristorante features Napoli-style pizza, flash-baked in a volcanic clay oven. Toppings range from house-made mozzarella and tomatoes from San Marzano, Italy, to playful pairings of Gorgonzola, potato and fig. Match with wood-roasted olives, imported salami and cheese or choose among dishes of tender meatballs, pasta and salads. The short span between Pistarro’s and Everedy Square is loaded with delectable treats. There are creatively crafted vegan donuts and more at Glory Dough & Diner, Angelcakes’ cupcake heaven, the certified 100-percent gluten-free stylings of Sanctuary Modern Kitchen, including grab-and-go frozen meals, and Stone Hearth Bakery.

Most recently, East Street celebrated Café Bueno’s move from its tiny strip mall spot to a converted 100-year-old mill just a block away. Café Bueno has a new liquor license, too, adding drink specials like their Cabo tequila and grapefruit “Vampiro” margarita. Even with expanded seating, fans line up at the door. Owners Heather Goddard and Francisco Cisneros, a husband/wife team, purchased the building more than two years ago when it was little more than a shell with no heat, air conditioning or flooring. Goddard says renovation was a huge challenge. “We wanted to do it right. We are one tenant in the building’s very long existence, but you can feel the magic of the bones and the history.”

Staying on East Street was a priority. She says, “It’s a very positive environment.” As city residents, her family frequents surrounding places, too. “We are in awe of our neighbors. We love being down the street from Family Meal. I’ve watched [Family Meal co-owner and celebrity chef] Bryan Voltaggio on Top Chef. … We go to Oscar’s [Alehouse] a couple times a month. We go to Rockwell Brewery. We are part of the neighborhood.”

Gambrill Mountain Food Company took over Café Bueno’s vacated space. Co-owner Ben Cohen says accessibility and parking are definite East Street wins. “Guests can easily get in and out for a quick meal.” Their eat-in location opens this month with a small bar and approximately 40 seats, supplementing their established food truck. The menu stacks favorites like the Gambrill Mountain burger, truffle fries, Japanese ramen and Philly cheesesteaks. Cohen plans delivery to surrounding breweries and envisions the site as a hub for a fleet of trucks.

Farther up, Rockwell has an “in” with adjacent Family Meal. The restaurant offers an abbreviated menu with custom sandwiches, ferried across the parking lot. Mean-while, the brewery designs beers to pair with Voltaggio’s food. This month it unveils a special Pink Boots Society selection, supporting an organization dedicated to honor-ing and encouraging females in the brewing industry—just in time for the 2nd-annual “Galentine’s Day” event.

Rockwell co-owners Paul Tinney and Matt Thrasher participate with neighborhood committees, including East Frederick Rising, a dedicated advocacy group. They say East Street wasn’t their first choice, but it won them over with ample parking, outdoor space and room to grow. The duo is eager to see improvements in walk-ability, specifically sidewalks and lighting, especially now that zoning allows greater flexibility for events and live entertainment. Thrasher is pleasantly surprised by how quickly the tightknit community embraced them. “They’ve made us their home brewery and hangout spot. We’ve made lifelong friends.”

At East Street’s northern end, emerging retail and restaurant options are buoyed by growing residential demand, including East of Market, a luxury residential community across from the Asian Café. The long-standing Coca-Cola bottling plant, where East Street meets Market Street, will be a mixed-use project with 9,200 square feet of retail space and 86 apartments. The area’s up-and-coming status is not lost on real estate-savvy James Smith, owner of Jerk ‘N Jive Caribbean Kitchen with his wife, Danielle. The couple recognized an opportunity niche for Jamaican-style cooking. Smith’s restaurant faces Oscar’s, Midnight Run Brewing and Bellisario’s Pizza in the Monocacy Village Shopping Center.

After two years in business he says, “I think we have a core audience.” Customers in dapper suits line up next to others in athletic wear as they order smoldering curry goat or juicy jerk chicken with heaping sides of sweet potato, callaloo or baked macaroni and cheese. The brown stew chicken is homey and meltingly tender and the coconut shrimp is distinctly different from the common fried version. Round out any meal with warm coco bread and a Ting soda or creamy Irish Moss drink.

While factories turning out pantyhose and frying pans have faded, East Street businesses now manufacture enjoyable experiences as much as goods. For all the natural growing pains, this venerable strip is proving that change only makes room for more to love.