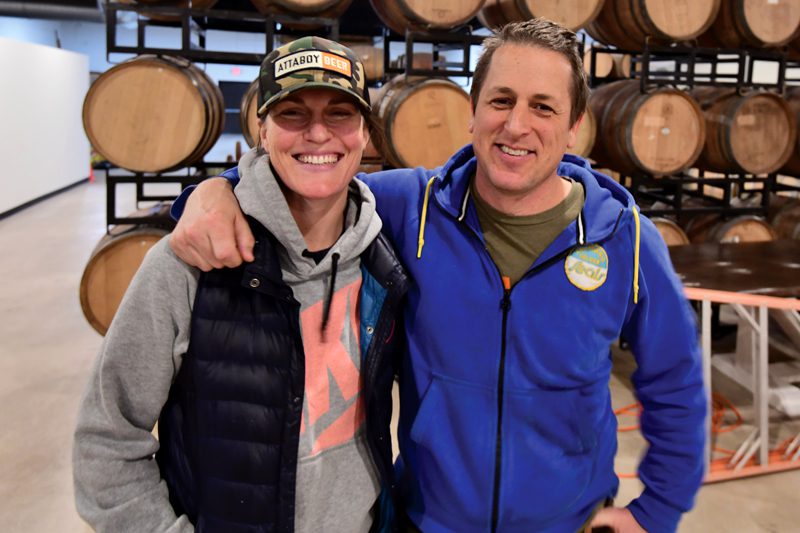 Good news continues to be brewing at an impressive rate for the beer industry in Frederick County, despite a couple notable setbacks, with growth expected to continue through this year.

House Cat Brewing on Sagner Avenue closed in April, after operating less than a year, while Barley and Hops brewpub on Urbana Pike, dating to the late 1990s, shut down in October. Both closures resulted from unique business circumstances, but industry observers see no decreased interest in locally brewed beer. In fact, several new breweries have opened in the City of Frederick, and the space vacated by House Cat has already been filled—with another craft brewery. There’s so much growth, some brewers and owners are calling a cluster of breweries along Carroll Creek the “Beermuda Triangle,” and East Street—connecting the Rockwell Brewery and Midnight Run Brewing, and near Olde Mother Brewing Co. and Monocacy Brewing Company—“Yeast Street.”

Tom Flores, brewmaster for Monocacy and Brewer’s Alley, has heard people talk about a beer bubble bursting, and that troubles him. Closures are “a natural part of the process, and in a healthy market you’re going to have that,” he says. “I do not believe it’s a bubble bursting at all. The bubble is still growing.”

Flores, who came to Brewer’s Alley in September 1997, is a patriarch of the local brewing scene. “I remember what the beer scene was when I came to Frederick,” he says. “I’ve felt for a long time that Frederick has been primed for a lot more activity than existing breweries could sustain. It’s really exciting to see the newer players, entering the brewing industry from all walks of life, who have gravitated to Frederick and made it a brewing center.” Monocacy expanded its tasting room in fall 2017, and Flores has been working to increase the brewery’s efficiency.

Dave Blackmon, who has run Smoketown Brewing Station in Brunswick for nearly four years, opened his second brewery—Smoketown Creekside—Oct. 9 in the Sagner Avenue space vacated by House Cat. He had been looking for a music-friendly space and found it there. “Frederick loves its music, and this venue is well-designed for it,” he says.

“Part of the reason we’re here is the critical mass with Attaboy and Idiom,” both within a few hundred feet, Blackmon adds. “I feel we’re all drawing more and more people.” Patrons can stroll between breweries, and that mass is drawing more visitors from out of town. More than 25 percent of Smoketown Creekside’s customers are from outside the area—Baltimore, Washington, and Montgomery County, he says. “People love beer in Frederick City. That’s the bottom line. It’s a very social city.”

Blackmon remains committed to his Brunswick location, where for two years he has been trying to open the historic event space upstairs. A recent state grant will help cover the estimated $225,000 cost of a required sprinkler system.

Brian and Carly Ogden launched the Sagner Avenue beer scene when they opened Attaboy Beer in January 2017 and are glad to see breweries opening nearby. “You see people walking between breweries. It creates a really nice vibe,” Brian Ogden says. “The more breweries on the map, the more it puts Frederick on the map as a beer destination,” Carly Ogden adds. “Frederick is already a tourist destination.”

In late November, they opened the Attaboy Barrel House, a separate business on the back side of the building that houses the original Attaboy. A neon sign inside proclaims “Fancy” beer. It started with 200 oak wine barrels for barrel-aged and mixed-fermentation beers; many are called sours but actually are tart. “There is a whole spectrum of sour beers,” Brian Ogden says. “We’re not pushing the sour boundaries.” The Barrel House normally will be open only on Saturdays and unlike Attaboy’s flagship, no kids, no dogs, no TVs. But there will be a couple traditional Attaboy beers on draft.

Like others, Clements praises the East Frederick beer climate. “What we’re starting to call it today is the Beermuda Triangle,” he says. “Everybody’s doing their own thing. Everybody’s got different opinions about styles of beer.” He sees no bubble, either—in fact, his expectations are quite the opposite. “I think there’s going to be at least another three or four breweries by next year.”

That count might include 4-year-old Steinhardt Brewing, which owner and brewer Jim Steinhardt is moving to the Union Mills complex—next door to Idiom—from his home in Braddock Heights. “That will be kind of a neat destination, five breweries within 100 yards,” he says. When he brought family to the area during Thanksgiving 2018, he saw people walking from location to location. “I think we’ll see a lot more of that,” he says. “Each one of us has something a little bit different. My specialty is Belgian [styles] but it’s not all I do.”

Steinhardt says he has his permits, is renovating the new space, and is shooting for an April 1 opening. “I’ll be increasing production about tenfold,” he says. “I’ll have more space, but I’ll also have a tasting room,” something the original location didn’t allow, although The Braddock Inn has served in that capacity with four Steinhardt beers on draft.

More than a year ago, Keith Marcoux and Nick Wilson moved Olde Mother Brewing, which opened near the Frederick Fairgrounds in 2015 to a larger space Downtown on North Market Street. In late July, they added 1,500 square feet to the tasting room. “The goal is to have a larger number of events on a systematic basis,” Marcoux says. “We have enough space for entertainment and production,” Wilson adds.

The move has been good for them, allowing significant growth. “In the time we’ve been here, it’s been steady growth,” Wilson says, with more customers from out of town—especially on weekends.

Last June 1, Matt Townsend opened Jug Bridge Brewery at 911 E. Patrick St.—Olde Mother’s original location. A longtime homebrewer, it’s his first commercial venture. And while location is important, he says, “the beer is more important. If you have solid beer, you can make it work.”

Townsend, too, is excited about the climate for beer here. “You can open a brewery and make it successful. Frederick is becoming like Asheville [N.C.] and Cincinnati.” He’s focusing on expanding production, especially for his most popular beer—Wedding Grisette, an approachable Belgian style brewed with raspberries—and plans to install bicycle racks out front to attract the cycling crowd.

Rockwell on North East Street, which marks its third anniversary next month, expanded almost immediately after opening, says co-owner Paul Tinney. In November, Rockwell hosted a festival of Frederick breweries at the fairgrounds. “We love having the community of brewers together,” Tinney says. “I like how every brewery has found a twist on craft beer.”

And consumers clearly enjoyed the first Hyperlocal Brewfest. “I’ve never felt so connected to a town through beer,” says Julie Thompson of Frederick. “We’ve been to all of the breweries,” adds her friend, Sharon Felton of Adamstown.

Just a block north of Rockwell, Midnight Run celebrated its second anniversary with an event Nov. 16. “It’s a great accomplishment to be here,” says co-owner Rich Cauble. “It’s kind of our hobby, gone out of control.” The brewery is like the tortoise in Aesop’s The Tortoise and the Hare, he adds. “We want to expand eventually, but we want to do it at our own pace.”

There’s been some growth in the county, as well. Frey’s Brewing Company in Mount Airy opened in 2013 but added a taproom in May of last year. “People come in here and tell us, overwhelmingly, they love what we’re doing,” says owner Adam Frey. “They say they didn’t know we were here.” Frey’s is distinguishing itself with its living-room atmosphere, superior customer service and proper glassware, Frey says. “The beer cocktails have been really good. People are really digging them.”