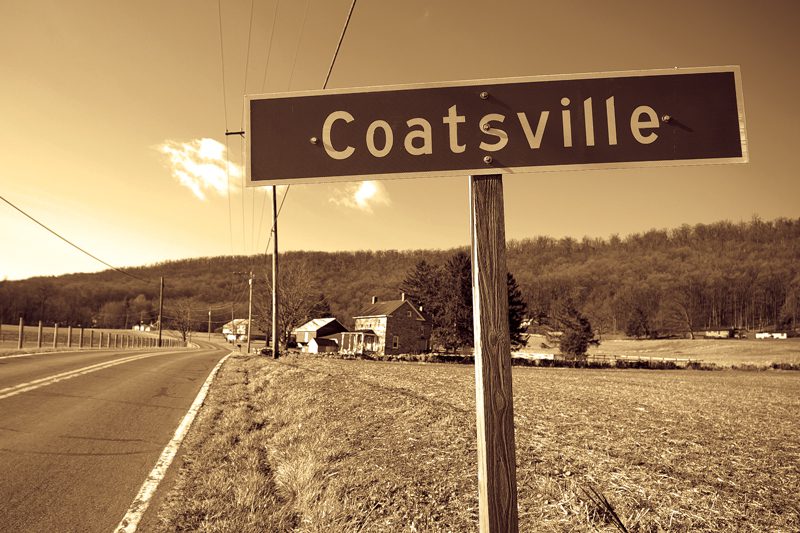 Common Ground Found in an Uncommon Corner of the County

It’s a village so tiny that its position on the Frederick County map is often overwhelmed by another small town. But Coatsville’s place, geographically and otherwise, should not be ignored. It’s a small town with a big story to tell, and more than one story.

Coatsville is a smattering of homes dotting the landscape of an agricultural community that dates back to the 1730s. It is a small tract of land near Burkittsville, nestled in the Middletown Valley. There is still a lot of wide-open space here along the base of South Mountain. Farming families can trace their roots back several generations—some to the village’s founders, others to the founders’ enslaved workers.

To be sure, the current residents of Coatsville seem to be devoid of racial animosity. Neighbors help neighbors throughout the year. In late summer they get together for a large picnic to celebrate their shared love of the land. “It’s a very inclusive area,” says Jody Brumage, whose family has lived here for seven generations. He is a historian and curator at the South Mountain Heritage Society in Burkittsville. “It is a welcoming and hospitable place. That has not decreased or diminished.”

Residents proudly tell the stories of their ancestors, explaining who married whom and who still lives in the area. They talk about farmers, distillery workers, housekeepers, cooks and teachers. “If we stand tall today, it’s because we stand on the shoulders of those who came before us,” says longtime resident Madeleine Butler.

Coatsville has been on the forefront of significant historic events. Early settlers played a part in the Revolutionary War and residents participated in the Civil War. Remarkably for an area so small, Coatsville has produced two Maryland governors. One was a slaveholder, the other an abolitionist.

Thomas Sim Lee, the second governor of Maryland, belonged to one of the founding families in the area. He lived on a large estate called Needwood and was a key figure in the Revolutionary War. He organized local militias and his wife Mary Digges Lee rallied women in the state to raise money. He served two terms as governor, 1779-1783 and 1792-1794. According to Brumage, he was also the largest slave owner in Frederick County in his time.

Francis Thomas, from nearby Petersville, was the 26th governor of the state, serving from 1842 to 1845. He had previously represented the area as a U.S. congressman. His governor’s term was rocked by a scandalous and bitter divorce, but he was able to maintain his public service career. He later served on the committee that produced the 1864 Constitution of the State of Maryland, which ended slavery in the state. An inscription on the back of his gravestone reads: “The author of the measure which gave to Maryland the Constitution of 1864 and thereby gave freedom to ninety thousand human beings.”

For all its country charm, Coatsville is not just Anytown, USA. It’s a remarkable example of mended fences and blended families. Coatsville residents slip into easy conversation and socialize comfortably with each other as they sit in Sue and Bill Blair’s house, looking at photos, talking about grandchildren and great-grands. Sue and her husband moved into her old family home on a farm off Md. 17. A retired counselor at Middletown High School, she can now find the time to host an afternoon of talking and sharing of memories and photos with some of her friends. They seem to have a true understanding of the past, and an appreciation of the present. They talk about the old days and the picnic this past year. No subject seems to be off the table. They have a softness in their eyes and a gentle tone in their voices even when they discuss the harsh realities of segregated schools and the vestiges of the Jim Crow era.

Clarice Henderson remembered going to Horsey School, a small building that is still standing and is used as a private residence today. George Albert Whalen shaped the minds and lives of the African American students in the Coatsville area by establishing the school and teaching there for nearly four decades. He was born in Point of Rocks and educated at Storer Normal School in Harpers Ferry, W.Va. In 1898, he approached local industrialist Outerbridge Horsey who agreed to donate land and financial support to build the school. “I loved going to the Horsey School. We had to walk

a long way. I stayed slim then,” Henderson says with a smile. After finishing her primary grades at Horsey, she went to the African American-only Lincoln High School in Frederick. “The bus came and picked up the white kids first, then came back for the African American kids,” she says. But she refuses resentment. “I love it in this area. I don’t think I could live anywhere else.”

“We never saw color,” says Mary Johnson, a 90-year-old lifelong resident of Coatsville. “We got along. God has been good to me. I am double-blessed. I have good friends.”

One of Johnson’s best friends is Madeleine Butler. Since arriving in the United States in the early 1960s, Butler raised a family here and became the unofficial keeper of family histories in the area. She was a young woman when she left her native France. She had met and married Randolph Butler, an African American Marine and settled into life here in his hometown where they raised their children. She speaks about her family and deep friendships with passion. “I was always fascinated by people, places, cultures. I was always learning,” she says.

Her friends can’t say enough about Butler’s loyalty, bright outlook and caring nature. “Everybody calls Madeleine. She listens. She has a good ear,” says Clarice Henderson. Butler accepts the compliment but insists that her positive point of view is a natural mindset. “As you think, so you are,” she says.

Historian Brumage knows the land and the people here intimately. His perspective is twofold: He grew up here and as a historian he has studied the area. In the early days, Brumage acknowledges slavery was a very big part of the picture. Needwood estate alone had more than 100 slaves. Legal segregation and institutionalized inequality followed. But Brumage notes that the black and white residents developed a deep kinship along the way. “There are families that felt very strong bonds across racial lines,” he says. Talking about his own family’s experiences he says, “It was a fairly poor area and people lived in a subsistence-type of manner. That’s how my grandparents lived and worked. They lived off the land.” He says that type of lifestyle encouraged working together, sharing resources and socializing.

Other industries were established using the area’s abundant crops. Two prominent families established distilleries. The Horsey Distillery and the Ahalt Distillery in Burkittsville were supplied by the local wheat fields and spring water. In turn, they supplied employment to many.

Several churches played a prominent role over the years in the lives of Coatsville residents.  Some are still standing and active; others are in disrepair, but noted for their historic cemeteries. St. Mark’s in Petersville (now St. Mark’s Apostolic congregation), St. Mary’s Roman Catholic Church and Union Bethel AME and Ceres Bethel AME churches were among the older churches in the region. St. Mary’s was supported by Gov. Sims Lee and his family. Many of the families of former slaves at Needwood belonged to the church, too.

Social clubs also cropped up and provided venues for recreational activities. Johnson and Henderson remember the Old Friends Club, an organization for African American men and the Blue Ridge Grill. Brumage points to the old Coats Corner, a little bar and restaurant owned and operated by a white family. He says the Coats family could be a key to the village’s name, but another story suggests the name comes from a former slave named Mary Coats. Neither account is clearly documented, according to Brumage. And, there are variations on the spelling of the name: Coats and Coates. Current residents may not be able to pinpoint which member of which Coats family is the area’s namesake. All they know is that he or she was their neighbor and, in Coatsville, that’s enough.

The village was officially recognized by the state of Maryland in 2002 and road signs were erected on Md. 17. Long before the state put them on the map, the people who live here recognized the natural beauty of the area and wanted it protected. Coatsville is now a part of Maryland’s Rural Legacy Program, which provides funding to preserve land and protect and enhance natural resources. It creates public-private partnerships to allow local governments and residents to determine how to best protect the landscape.

Folks gather at least once a year to celebrate their long history and their deep ties. Coatsville’s annual picnic is a time for the residents to recognize their shared past, appreciate the present and look toward the future with optimism. The picnic started in backyards and graduated to the Ruritan Club. It brings together long-lost and well-known cousins and new arrivals to the area. All are welcome.

While the elders in the community are slowing down, younger people are stepping up. Some people in their 20s, like Brumage, are opting to stay and build a life here. Nearby Burkittsville is drawing new residents from Montgomery County and Washington, D.C. New and old are coming together and enjoying the sights and sounds of the country, just a short drive from the city. The blending continues.

Friendships here are multigenerational. Looking around a room filled with friends and neighbors, Mary Johnson says, “This is the joy that I have deep down inside.”

Sue Blair smiles and pours another cup of coffee for Mary. She and her friends have been reminiscing for a good two hours and they all look like they could keep going deep into the afternoon. Sue is clearly enjoying her guests’ company. “If everyone could sit down like the people of Coatsville, the world would be a better place,” she says.