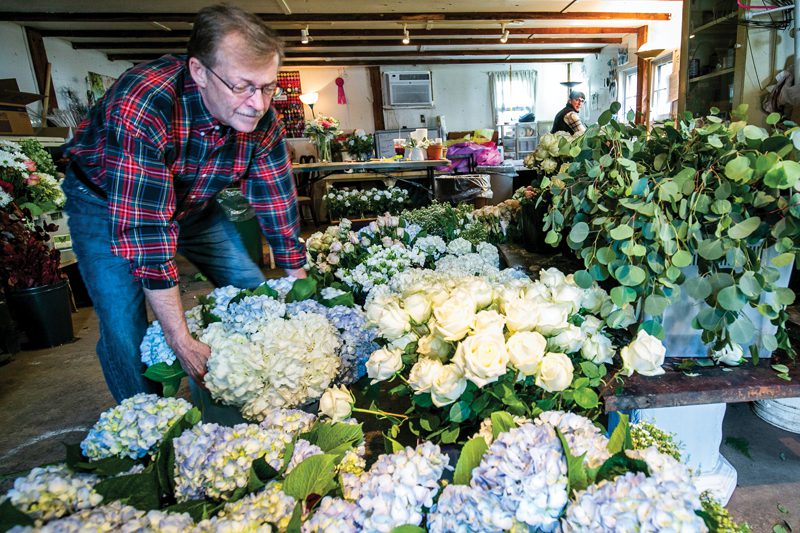 After Years of Road and Utility Work, New Market is Making a Comeback

As co-owner of Ory Florals, Steven Jeweler sometimes goes into the retail portion of his New Market-based business to relax among the silk displays. “It looks like a flower garden,” he muses.

The retail section was brought back in August after foot traffic began to increase along Main Street following years of road and utility work. “When the street went, you didn’t have people,” Jeweler says. “There was no point to do it, so we pulled that [part of the business].”

Now that construction vehicles and crews are gone, people are returning to shop, dine and experience the historic street that was among the most heavily traveled in the country in the 1800s. “… I think that the [current situation] and the future here are extremely promising. I think the fact that there is some real estate available is very fortunate. Things can come in that we haven’t even thought about that are reasons for people to come back to New Market.”

Mayor Winslow Burhans notes the town attempted to coordinate a new water main line and streetscape improvement project at the same time so the road was only torn up once, but funding for both did not arrive at the same time. The area had gone through a dry summer several years ago and there were concerns of wells going dry, so the town decided to move first with the water main replacement. “It was time to get these things done,” he says. “We were like we have to get this done before we have a crisis.”

After finishing up the water main, streetscape funding was approved to upgrade and increase the size of 1.1 miles of sidewalks, making them compatible with the Americans with Disabilities Act, while adding new street lights and landscaping, along with repairing some drainage problems. “It was terribly frustrating,” Burhans says. “You try to do something right and government gets involved and you can’t, and you end up with your streets torn apart twice. … It was a very circuitous route to the finish line.”

But with both projects finished, the town’s Main Street is in the midst of a revitalization. In 2018, it was named a Main Street Maryland community, opening up grant opportunities—one funded a new sign off Interstate 70 asking travelers to “Come make history with us,” which departs from its former sign touting the town as the “Antiques Capital of Maryland.” Burhans notes the town still has several quality antique dealers, but a changing, diversifying retail landscape led to the new tagline.

The town added a farmers market and new events like the Fighter Run 5K to benefit the Hurwitz Breast Cancer Fund at Frederick Health. A branding study was completed discussing what residents would like to see, while a visitor experience plan is identifying amenities tourists would find enjoyable such as adequate parking and access to unique opportunities. “I think the streetscape [project] … proved New Market as being as a great economic development platform,” Burhans says. “We have a product to sell, which is our historic district, our charm, the ambiance.”

Burhans notes the town is contemplating having an event barn at the community park to host events all year. He would also like to see local wineries join together for an event so folks could sample all the wines in one place. “There are a lot of cool ideas out there that we are trying to develop,” he says. “It just takes some time.”

Jeweler lives and works at his Main Street flower shop. While out in the community at either the post office, bank or Food Lion, he has seen an increase in new residents, which he hopes will come to Main Street, leading to more businesses opening up. “There is real estate available for new establishments on Main Street and the key from what I have seen over the years is for an entrepreneur, new ones and existing ones, to provide a consistent reason for people to want to come back,” Jeweler says. “If they come as a one-shot, that is not good. [At] our business, people come back. … We are always trying to give personalized service. I don’t care if you buy one boutonnière or if you have a huge wedding. I am going to treat you the same. I am going to give you personal service. The kind of thing you just don’t really find anymore.”

Daniel Ojeda opened The Village Potter out of his home in 2013. The back-to-back town projects “pretty much killed my business for a couple of years there.” During the streetscape work, he began doing workshops to help bring people in, such as making cookie plates around the holidays. “The plates are still wet and people can come in and carve on them and add to them and glaze them right there,” he says. Other workshops include cocoa mugs, pitchers and herb pots. “That has been pretty successful for me, so I am continuing that.”

Ojeda is now keeping longer hours, including opening earlier on weekends. “I am producing more pots because I sell more pots now, which is good,” he says.

Dan and Staci Caiola opened up The Derby restaurant in September 2018 after the Main Street construction was finished but lived through the experience as town residents. The couple formerly owned the Old Towne Restaurant in Mount Airy, which survived through a similar streetscape project several years ago.

Recalling a bad experience in Mount Airy, Dan Caiola notes, “It’s no one’s fault. You can’t really point a finger. It’s more important to me that it gets done right and the end result is perfect [rather] than getting it done quick. You don’t want to spend the time and the money to not have it done perfectly and done for the long term. … Good work takes time and you can’t expect it to be done overnight.”

The couple sold the Mount Airy restaurant over the summer to focus more on The Derby, where you will find Dan Caiola seven days a week. “A short day for me is 10 hours,” he jokes. Having a business in their hometown gives the Caiolas the ability to really get to know and listen to their customers. “We want to be the place that people feel like they can get exactly what they want here,” he says. “You are not just a number or reservation. You are our neighbor. You are our friend. … We are fully invested in the town.”

They are planning multiple events for 2020 including a cornhole tournament, barbecue chili cookoff and movie nights throughout the summer, as well as parties to kick off the seasons. “People want New Market to thrive and want the growth and want to see the fun things,” Dan Caiola says. “… They would love to be able to stay in New Market and not have to drive to Frederick or Westminster or Baltimore or D.C. People love the fact that there is stuff available here in New Market.”

He regularly recommends Vintage to his patrons and views the other Main Street restaurant as a community asset, not a competitor. “We want them to succeed,” he says. “A failed business doesn’t just look bad on that business. It looks bad on the town. We are all in it together. Every business on Main Street needs to work together and thrive together and make money together and survive together.”

Open for just over a year, The Derby is regularly busy with many residents happy to support a local business. “The mayor and town council are so pro-business, so pro-economic development,” Dan Caiola says. “It is great to have a council and a mayor on your side. … It’s great that you have the support of everyone. It seems like everyone wants all of the businesses to succeed. It is like Team New Market.”