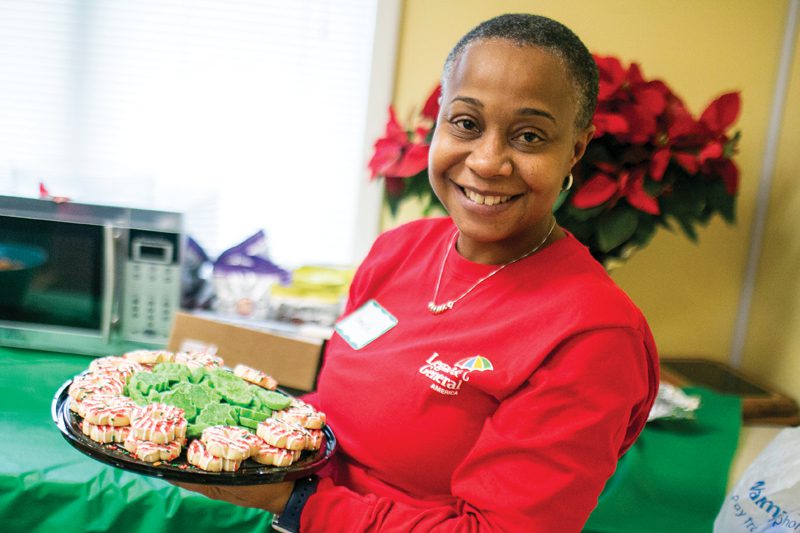 Many businesses earn high marks for their commitment to community responsibility

It wasn’t all that long ago that consumers based many of their purchasing decisions on a few key factors: price, convenience and customer service. But more and more modern shoppers today expect the companies they patronize to demonstrate a commitment to social causes. The industry term is “corporate social responsibility” and organizations large and small are realizing the impact it can have on consumer loyalty as well as employee recruitment and retention.

Although the cost of goods and services will always be a major factor in the public’s purchasing decisions, a growing number of consumers also weigh a company’s commitment to social responsibility. A recent survey by D.C.-based research and consulting firm Clutch revealed that more than 70 percent of respondents said they believe it is important for businesses to take a stance on social causes.

This past holiday season, the couple made a conscious effort to buy their grandkids Green Toys, which are made from 100-percent recycled plastic. Trish says she also notes the stance businesses take on women’s issues, while Bob, who retired from the Environmental Protection Agency, considers where companies stand on environmental issues. “All things being equal, [corporate social responsibility] is something we try to support,” he says.

Across Frederick County, many businesses are practicing the key tenants of corporate responsibility. Here are just a few of them:

Many Americans tend to think of corporate philanthropy as major gifts and sponsorships by Fortune 500 companies and foundations to large nonprofits such as public television or the Smithsonian Institution. But any effort by businesses—large or small—to make gifts to charitable organizations can be considered corporate philanthropy. Although many of these contributions might be considered “small” in relation to major corporate gifts, the impact to the organizations on the receiving end of those donations is often enormous.

Dan Tipsord works for Skyworks RF Ceramics in Adamstown, a manufacturer of high-performance analog semiconductors. He wanted to contribute to Frederick Health Hospice so that other families could benefit from its services, just as his family did. “When our daughter was in the final days of her life, Frederick Health Hospice took great care of not only her, but of our entire family,” he says. “Skyworks strongly believes in supporting the communities in which we live and work and provides an excellent matching gift program to do so.”

Because Skyworks will match his contributions, Tipsord enjoys the satisfaction of knowing that his gifts to Hospice will be doubled. For a family in need of hospice care for a loved one, the impact of Tipsord’s and Skyworks’ donation is immeasurable.

Although Skyworks is a global company that is headquartered in California, its employees in Adamstown are encouraged to support local organizations. In addition to its matching gift program, employees can also suggest that the company make gifts to eligible nonprofits that they believe are worthy of its support. The process is simple and does not require reams of paperwork.

“We review requests regularly and generally just ask the employee to explain why the organization is so meaningful to them,” says Anita Evans, Skyworks’ senior human resources consultant in Adamstown.

Research reveals that Skyworks Solutions’ charitable contributions and matching gifts program can have a significant impact on its employee recruitment and retention efforts. A 2016 study on employee engagement by Cone Communications revealed that 70 percent of employees say they would be more loyal to a company that helps them contribute to important issues. Maybe that is why Skyworks was ranked #129 in the Wall Street Journal’s 2018 list of 250 best-managed companies, based on customer satisfaction, employee engagement and development, innovation, social responsibility and financial strength.

It should come as no surprise that a business that makes its money off the fruit of the land would be a proponent of environmental sustainability. But McCutcheon’s Apple Products of Frederick is using the sun to do more than ripen the apples and other fruits it makes into its jams, juices and sauces. It is harnessing solar energy to power its manufacturing operations.

Careful observers will notice that the roof of McCutcheons’ factory and store on South Wisner Street in Frederick is now covered by solar panels—546 of them, to be exact. The 100-kilowatt solar array now generates up to 80 percent of McCutcheons’ power needs. “When we first looked into solar many years ago, we just were not able to make it work financially,” says Bob McCutcheon, the company’s president. “But then the price of solar cells dropped dramatically and we realized we’d be stupid not to do it.”

McCutcheons’ commitment to the environment extends from the roof to ground level. Inside the factory, the business produces nearly one million pounds of apple pomace (the skin, seeds, core, stems and soft tissue of the fruit that is left after milling and pressing of apples) annually. That manufacturing byproduct is collected and sold to local farmers to be used as animal feed or to supplement manure composting systems.

McCutcheons’ commitment to recycling also extends to its cardboard waste, 100 percent of which is baled and sold to recyclers. Although this kind of sustainability may require more effort and may even result in some additional upfront costs, a 2019 study on retail sustainability revealed that more than two-thirds of those surveyed consider sustainability when making a purchase and 47 percent are willing to pay more for sustainable products.

Employees of Legal & General America, a life insurance company in Frederick, are encouraged to volunteer, both for causes that mean something to them personally as well as for efforts the company has chosen to support. And Legal & General puts its money where its mouth is by providing all employees two days a year of paid time off so they can give back to the community.

For the past several years, many of the company’s 450 employees in Frederick County have fostered a special relationship with the residents of the Weinberg House Senior Apartments in Frederick. They have hosted Sock Hops and Christmas parties, played games and even helped restock the facility’s community pantry when its supplies were low.

Last year, Ben Johnson used his paid time off to work with a local landscaping company to develop a small patch of land at the Weinberg House into a small community garden for the residents. He believes Legal & General’s commitment to volunteerism benefits the company by creating a positive corporate culture. But it can also impact employees personally, too. As a native of the United Kingdom, these kinds of events have helped him feel more a part of his adopted home. “They help create a greater sense of connection to the larger community,” he says.

Cyndie Yee, human resources business partner for Legal & General in Frederick, notes that employees are given the opportunity to serve as project managers for the office’s various volunteer efforts, which have also included mentoring students at Lincoln Elementary School and organizing participants for the Animal Welfare League of Frederick County’s annual Paws and Claws 5k run. “They get an opportunity to plan an activity and in doing so, interact with others in the company,” she says.

Research has shown that providing employees with paid time off to volunteer can prove to be a worthwhile investment. A 2016 survey by Deloitte revealed that engaging employees in volunteering initiatives can help develop key leadership skills and professional development that benefit the organization. But corporate volunteer programs can also play a role in recruiting new talent. “We had one candidate specifically say that they chose to interview with us because of the community activities we support,” Yee says.

Businesses that strive to reduce operating costs at the expense of employee benefits often discover that these measures can prove to be shortsighted—especially when those cuts result in employee turnover. It is estimated that it costs employers 33 percent of an employee’s annual salary to hire a replacement if he or she leaves.

Throughout his career, Joe Dorsey saw the toll cost-cutting efforts had on employee morale and retention. So, he and his wife, Lesley Dorsey, founded Unity Technologies Corporation, a government contracting firm in Frederick. Lesley is the CEO and Joe serves as the company’s president. As leaders of the organization, they made a commitment from the outset to treat their employees with respect and to acknowledge their value.

For the first several years of their joint venture, Joe did not get a raise and Lesley did not take a salary. “We made sure that the profits we made went back into the business so we could increase the benefits we offer to our employees,” she says. When Unity Tec recently renegotiated its health insurance contract, “We plowed every cent of the savings we achieved into our company contributions so our employees would pay less,” Lesley adds.

That means Unity Technologies employees now have 65 percent of their health insurance coverage costs covered, up from just 25 percent four years ago. Employees also receive three weeks of paid leave; flex and comp time; 10 paid holidays a year; and up to five weeks of paid family leave annually. Co-workers can also donate their unused paid time off to their peers to extend time off for everything from parental leave to critical illness. The company has also begun offering education benefits for those interested in career advancement.

Joe Dorsey admits offering these generous benefits can be challenging given the competitive nature of the government contracting industry. “We work in a field where often the lowest bid wins, but we believe the better we treat our employees, the happier they will be and the better they will do their job,” he says. “And it has really paid off for us. Our attrition rate is low, and we’ve even had people that left and came back.”

Elizabeth Burkell has been with Unity Technologies for about a year and a half, having previously worked for both large and small businesses before joining the company. “I really appreciate that the Dorseys understand what work-life balance means to their employees,” she says. “They know we work hard. Government contracting is a very competitive industry. There are lots of late nights and weekends, but our hard work is acknowledged and appreciated and we are always compensated very fairly.”