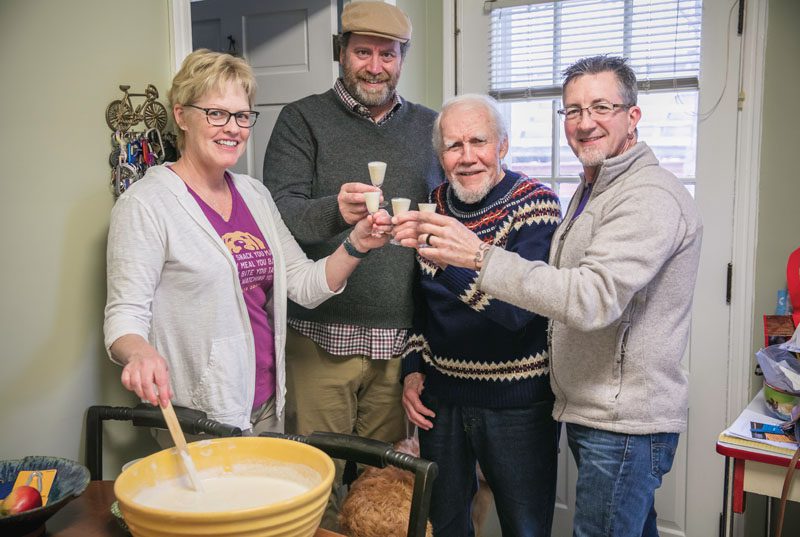 Love it or hate it, eggnog is as intertwined with winter holidays as candy canes and heaping platters of cookies. It’s thick and fortifying, often spiked with warming liquors. Sipped, not chugged.

It’s a hug in a glass that conjures memories of gathered family and friends.

The seasonal treat we know as eggnog has a long history. “Nog” is an Old English word for ale, which was often served in a carved mug called a “noggin.” Medieval folk might add an egg and a splash of milk or cream, upping the drink’s restorative power. Other references point to “possets,” sweetened hot drinks made with curdled milk, spices and wine. Such milky punches were special occasion fare because they were loaded with pricey ingredients. When the drink came to America, colonists substituted rum.

Today, we still enjoy this custardy-rich treat to toast good health and prosperity, with a bonus—nostalgia. Family recipes are closely guarded and passed from generation to generation. Some require months to prepare. Others are whipped up right before serving. Almost always chilled, the egg component may be raw or gently heated. Some versions lean heavily on alcohol. Others eschew spirits altogether.

This is National Eggnog Month, naturally, with Dec. 24, Christmas Eve, flagged as National Eggnog Day, but prepared virgin versions appear in supermarkets as early as October. Buying eggnog is an easy way to enjoy this goodie as commercial eggnog can be stored and enjoyed like milk.

South Mountain Creamery in Middletown started eggnog production on Oct. 17 and will continue through New Year’s Day. Creamery owner Tony Brusco says the business expects to make nearly 6,000 gallons during the run. “The eggnog that we make is a family recipe that we created about 18 years ago. Every year we try to improve it a little, but it is one of the best you can find and made right here in Frederick.”

Fans often personalize ready-made eggnog, thinning it with milk to their desired consistency or adding a wee nip of the hard stuff. There are even lactose-free and vegan formulations available. Brusco prefers his ’nog cold, “the colder the better,” with prominent nutmeg flavor. Creative cooks use it to flavor pancake batter, cakes, frozen desserts and candies, even as an indulgent addition to coffee or splashed over humble cornflakes.

For those who want to try their hand at whipping up a batch, we talked to local experts known for sharing their seasonal creations.

Mary Lawrence “M.L.” Carroll is one of Frederick’s “celebrity” chefs and owner of Canapés Catering. In addition to racking up local and national accolades, Carroll and her Canapés team will hand-make some 20,000 cookies and thousands of friandises (assorted mini sweets) this holiday season, including plentiful options inspired by her family’s eggnog tradition.

“We listen to what customers want,” says Carroll. This time of year, Canapés is keen on pumpkin rolls with a swirl of creamy eggnog mousse or eggnog cheesecake, decadent tarts, eggnog ice cream, and intoxicatingly spiced truffles for catered events, private parties and even from Canapés 550 Grab & Go Café.

Carroll readily shares her parents’ recipe, reminiscing about the family’s annual Christmas Eve party and New Year’s Day brunch. “My mom would separate a dozen eggs. She would whip the yolks with sugar. Then she would whip the egg whites, which would be folded in after the other ingredients were combined.” She gushes, “It was so good! It’s a huge part of my holiday childhood.” Her mother’s secret: “She swore by the cheapest alcohol you could buy,” a blend of bourbon, brandy and rum. The Carrolls well-used punch bowl is stored at Canapés Highland Tech Park facility.

Meta Nash, a former Frederick City alderwoman, fondly recalls her father taking charge of making eggnog. Now, the tradition continues for another generation, with her daughter and son-in-law in Atlanta hosting a ’nog open house for friends every Christmas. She says, “I grew up in Mississippi and Daddy’s eggnog was reserved for the Christmas holidays.  My father had a few special recipes that he would make: onion soup, New Year’s Day black-eyed peas and eggnog among them.”

Her father preferred bourbon (2 cups per batch), but Nash modified the recipe to include a jigger or so of dark rum. The recipe calls for mixing the whiskey with 3/4 cup sugar and letting it sit overnight to fully dissolve the crystals. Then, the syrupy liquid is drizzled into beaten egg yolks. “My father always said the whiskey ‘cooked’ the eggs,” recalls Nash.

Some recipes take it to the extreme, such as Food Network personality Alton Brown’s aged eggnog. These rely upon a hearty dose of alcohol for its antimicrobial and preservative properties to counterbalance the raw eggs. Instead of consuming immediately, the boozy concoction is mellowed in cold storage for weeks or even months to achieve maximum flavor.

This is the Bowers family’s preferred method. We caught up with Frederick native Charles “Fritz” Bowers Jr. and his daughter, Chrisse Bowers, who use a 100-plus-year recipe. Fritz remembers his father, “Daddy Bowers,” making gallons to share with friends and neighbors as far back as the 1940s.

Charles F. Bowers Sr. was a Frederick architect. “The last workday before Christmas,” recalls his son, “he allowed people to stop work at noon. They ate lunch. Then, all the contractors would stop by and get eggnog.” In the heyday, “We used to make 30 to 40 batches. Each one had a quart of bourbon. … Now we only make enough.” A few years ago, they tested different liquors, ultimately deciding the original recipe had the best flavor. Virginia gentlemen bourbon, Bacardi rum and Tennessee whiskey provide the kick.

Making eggnog together is half the fun. “You put all the nonalcoholic ingredients in first. Then you have to be very slow and careful when you pour the alcohol in,” says Chrissy in mock seriousness, before breaking into a laugh.  “You have to be in training for a couple of years to make sure that you’re not going to mess it up.”

Chrisse, Fritz and a few helpers start around Thanksgiving, so the eggnog will be ready for the family’s annual holiday gathering, which may include lunch at Brewer’s Alley followed by a trip to the cemetery to decorate Bowers family graves with greenery. The pair portion their liquid gifts into recycled peanut butter jars for easy distribution. Occasionally, they serve it from a beehive-shaped heirloom vessel that’s as old as the family recipe.

For those who are squeamish about raw eggs but still want to try making this hallmark indulgence, chef/author Sara Moulton’s version tempers the egg yolks with hot milk before adding ingredients to a larger pan over low heat  (160 degrees) and stirring to a very loose custard consistency. Corn-starch can help stabilize the mixture. Strain or blend to remove any lumps. The late Art Ginsberg (aka Mr. Food) offered a quick-and-easy eggnog recipe that nixed the eggs altogether, replacing their thickening power with instant vanilla pudding.

If you go raw, the American Egg Board advises using only refrigerated, clean, uncracked, fresh Grade AA or A eggs. Pasteurized shell/egg products reduce the risk of foodborne illness. Clean all cooking equipment and prep surfaces and, of course, always wash your hands.

So, channel Clark Griswold’s devotion to hearth and home. Don that colorful sweater. Gather loved ones, quaff a sip of silky eggnog and raise a glass of cheer, because holidays come but once each year.