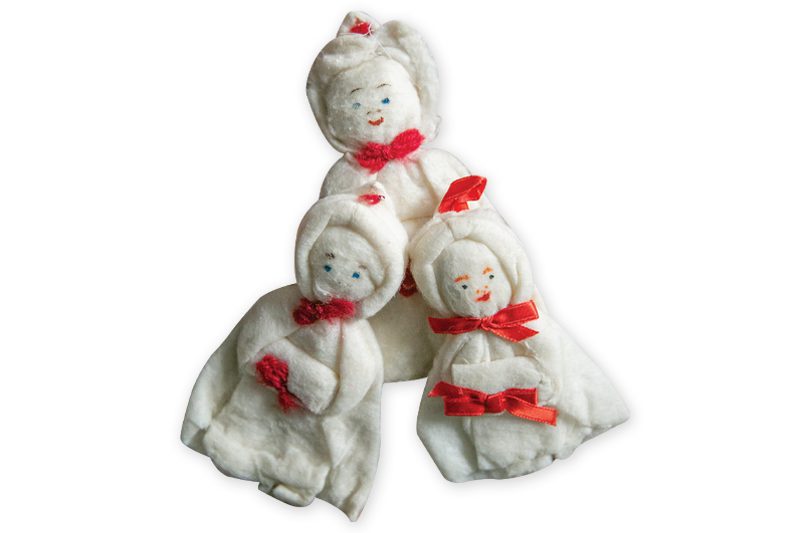 This is the season when decorated trees are virtually everywhere—in homes, shops, restaurants, beauty salons, offices and public buildings. On display at Heritage Frederick’s Museum of Frederick County History are 13 trees decorated by local artists. The “Festival of Trees” will be open through Dec. 15, and visitors are encouraged to vote for their favorite.

Visitors will also see a small collection of historic ornaments, including these three smiling little girls, each dressed in winter attire with a cape, hood and muff. They date back to 1932-1941, when Elizabeth “Betty” Schley was a student at Visitation Academy. Located in Downtown Frederick, Visitation Academy was a Roman Catholic school for girls. It closed in 2016 and is still deeply missed by many local families. Nuns who taught there made these ornaments from cotton and ribbons that were donated to the school and gave them to Betty.

After graduation, Betty trained as a nurse. In 1947, she married Milton “Bubby” Frank and had three sons. After her children left home, she worked for The Frederick News-Post and was active in many organizations until her death in 1989.

Betty’s association with the Catholic faith runs deep. She was named for Elisabeth Ann Seton, who established the first Catholic girls’ school in the nation in Emmitsburg and became the first person born in this country to be canonized a saint. Betty’s ancestors included John Thomas Schley, Frederick’s first settler, who emigrated here from Germany around 1745.  Her great-grandfather Nathaniel Wilson emigrated from Ireland and integrated the Catholic faith into the Schley family.

These ornaments were passed down to Betty’s son, Robert Frank, who continued the family’s tradition of hanging them on the Christmas tree each year. He donated them to Heritage Frederick in 2016. Heritage Frederick is located at 24 E. Church St.  and is open Wednesday to Saturday from 10 a.m. to 4 p.m. and Sunday from 1 to 4 p.m.