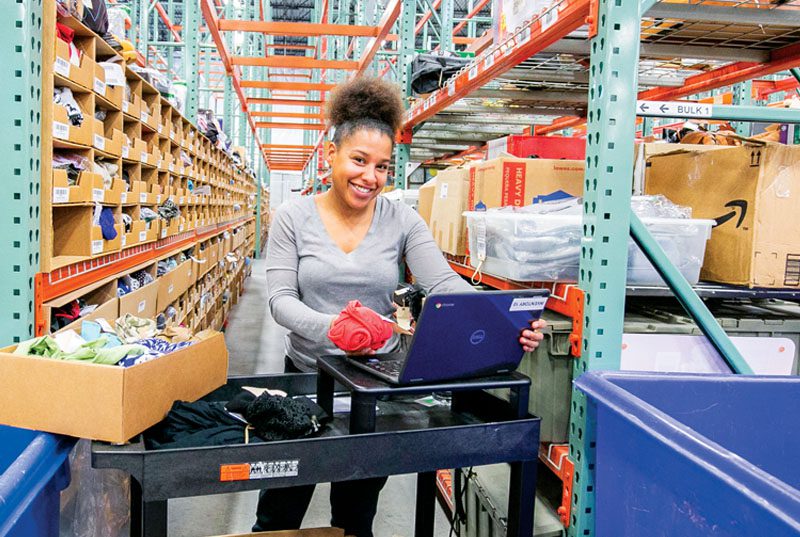 Turning 50 is often a time for taking stock, and Goodwill Industries of Monocacy Valley is doing just that. The nonprofit that pioneered re-use, repurpose and recycle is now spreading its brand online. The relatively small local chapter now has one of the largest online footprints of any Goodwill branch in America, and President/CEO Michael Meyer expects it to only get bigger.

Goodwill Industries of Monocacy Valley oversees Goodwill stores in Frederick and Carroll counties. In the past couple of years, Goodwill has begun its own Amazon-style business model, shipping about 25 percent of its goods to buyers all over the country. “The model we have now is volume over value,” Meyer says. “We’re shifting to a model of value first, volume second.”

Goodwill, in Frederick and throughout the nation, is struggling in a way that’s recognizable to many brick-and-mortar retail operations. “Thrift is not a protected class,” Meyer says. “We are like any other retailer.” As Americans have turned to online shopping, the local Goodwill hopes to expand its customer base.

Sixty percent of the items donated to Goodwill are not suitable for selling, Meyer says. Some of that, like textiles, can be sold for recycling, but this earns pennies on the pound. Furniture, housewares and toys, however, often have no aftermarket options. These old, broken or damaged items end up in the landfill. This costs Goodwill money, and it’s a type of cost that most retailers don’t encounter. Consequently, that reduces funding for Goodwill programs.

Facing revenue declines, Goodwill needed to tap into a new revenue stream. Online sales are starting to fill that gap.

The local Goodwill organization has come a long way since the first Frederick store opened at 10 S. Bentz St. back in 1969. Soon after, it moved to the old Ox Fibre Brush Company factory on East Church Street. In a spate of bad luck, shortly after the move, fire destroyed a large part of the building.

Goodwill temporarily moved to the Frederick Post Office while the building was cleaned and renovated. The Church Street building then served as headquarters for the organization for the next 45 years. The old building had its challenges, however. In 2018, it was sold, and today only a donation center remains there. Developers Hook Properties and EquityPlus are planning to convert the old factory complex into 83 units of affordable housing.

The local Goodwill is now headquartered south of the city on Pegasus Court, with eight retail stores around Frederick and Carroll counties. Plans are to consolidate administrative offices and workforce development offices into new headquarters being built on Monocacy Boulevard. Last year, the ShopGoodwill.com e-commerce distribution center and warehouse opened on English Muffin Way.

Goodwill has always offered people a hand up, from goods that cost a fraction of their retail value to job training. Goodwill Industries of Monocacy Valley employs more than 300 people, in jobs from retail sales to customer service, warehouse operations and e-commerce. Meyer, who came aboard in 2016 after 10 years with Goodwill Industries International, expects the e-commerce and warehouse operations, which now employ about 100 people, to add an additional 200 workers in the next two years.

Those skills will not only help Goodwill boost its bottom line, Meyer says. They’ll also prepare employees for a retail job market that depends heavily on e-commerce skills. “We have to automate,” he says. “The volume of product is so large that without automation, you can’t compete.”

If Goodwill can’t keep up in today’s retail marketplace, the nonprofit can’t continue to train people to compete in the workplace. In 2016, the local chapter provided services to 1,025 job seekers, and placed 144 people in jobs. This fulfills Goodwill’s vision of providing meaningful jobs to everyone who wants to work, and Goodwill’s mission of creating hope, jobs and futures within the community.

Goodwill offers job training to young people, people with disabilities, single parents and veterans, among others. Meyer, a Marine veteran, says Goodwill’s new Veterans Service Center, expected to open on Veterans Day next year, will fulfill a need in the community. “It will become a national model,” he says. “We need to provide a better way for veterans to re-assimilate into society.” The center will serve a regional population stretching from Baltimore to West Virginia, south to Virginia and north to Pennsylvania.

The local Goodwill organization also trains young people with intellectual or developmental disabilities in its Opportunities for Success program, in partnership with the Ausherman Family Foundation. “The goal is to do earlier intervention to get these students job-ready,” Meyer says. “We want to see if we can move the needle on job placement possibilities for children with disabilities.”

Like the e-commerce and veteran training program, Operations for Success is a model that other Goodwill organizations are interested in emulating. “We’re doing this out of necessity,” Meyer says. “Our survival depends on innovation.”

There is still a market for used goods, says Meyer, just not necessarily one based on brick-and-mortar stores. That market is being housed in the new English Muffin Way warehouse. Tucked among the long, white warehouses in the industrial complex is a 110,000-square-foot facility that houses Goodwill’s promising e-commerce operation.

While inventory at the eight retail stores gets 14,000 in-person views over a four-week cycle, online opportunities, however, number in the millions.

One of Meyer’s favorite examples is a coffeepot that sat in a store for four weeks, with a $7.99 price tag, getting no takers. Goodwill could have trashed it, but instead chose an online auction and sold the coffeepot for $43.

“Our job is to extract maximum value from our donations,” Meyer says. At the same time, it can train people for relevant jobs. “We’re creating jobs in categories that matter,” he says. The e-commerce operation will become 24/7 in the next two years, generating an expected $7 million a year.

At the new e-commerce building, workers inspect items, have them photographed, sort them and list online. Many of the clothing comes from Give Back Box, a service from high-end clothing retailers. This encourages customers to donate a piece of used clothing when they order a new item online, re-using the box and cleaning their closets all at once. Once sorted, measured, labeled and uploaded to e-commerce, clothes are packed into plastic bags to keep them clean.

Once an item sells, it goes to a shipping area, where it’s packed into a soft bag or box. Rolls of bubble wrap, made on site, cushion fragile items. Locals shoppers can pick up some of the biggest items.

Lyons says one popular new service is Baby Bundles, an assortment of outfits arranged by size and season. Other parts of the warehouse hold books, CDs and DVDs, plus jewelry and valuable items.

The new warehouse is a much larger version of a smaller space on Monroe Avenue. “It’s been great for our employees,” Lyons says. “It’s a cleaner space and a better facility. It also helps our workforce development efforts. We want to train people in jobs that actually put them into the future workforce.”