Shop with a Cop 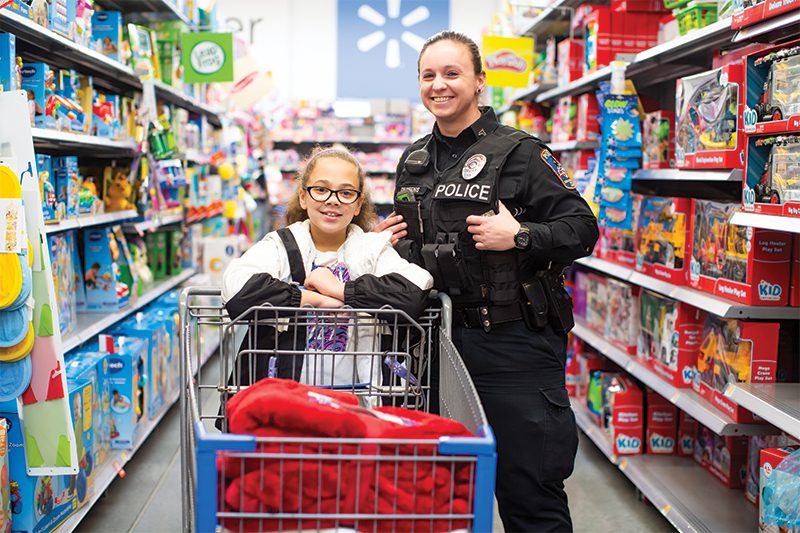 Program Bonds Youth with Police Officers over Gifts and Food

It’s early on a Saturday morning last December when police officers and children arrive at the entrance to the Walmart on Monocacy Boulevard.

Some of the kids clutch lists, while others prefer to wing it. All were excited for the next few hours, which would include not only shopping, but wrapping, a little recreation and a free lunch at Outback Steakhouse.

They are greeted by Mary Ellen Hoffman, who chairs Shop with a Cop, the program that gives the children $100 to spend on gifts for family members and another $20 for themselves. Assisted by co-chairs Pat and Craig Taliaferro and volunteers from the Frederick Optimist Club, Hoffman carries a clipboard as she checks the children in and makes sure each officer has a Walmart gift card preloaded for $120. Optimist Club president Earl Gamber watches as Hoffman ticks off each child on her list. “We’ve been doing this for 12 years,” he says. “The members recommended it.”

As the holiday shopping season whips into a frenzy this month, several dozen children will once again get the best gift of all—the opportunity to become gift-givers.

Each December, 40 elementary school students join uniformed police officers from various agencies—including Maryland State Police, Frederick County sheriff’s deputies and Frederick City Police—pick up their charges in their squad cars and take them to Walmart for Shop with a Cop.

But it takes more than one day. Hoffman starts planning nearly a year in advance. There are fundraisers to organize and grant applications to fill out to cover gift cards that cost more than $4,000. Hoffman pairs each child with an officer, and she makes sure all parts of Frederick County are included. The day itself unfolds like clockwork, with each activity planned almost down to the minute.

One of the first officers to head down Walmart aisles on this December morning is Cpl. Jacki Druktenis of the Brunswick Police Department. With her is Cheyenne Weedon, age 10 and a fourth-grader at Brunswick Elementary School. “I’ve got a list in my head,” she says. She proceeds to the home section to pick out a candle for her mother. “Do you know what scent she likes?” asks Druktenis. Cheyenne studies the rows of Yankee Candles and finally settles on apple cinnamon.

Cheyenne looks through the Harry Potter toys before checking out the board games, trying to decide among them. Meanwhile, Haylie Fultz, a fifth-grader at Valley Elementary, looks over the Barbie dolls before choosing Play-Doh for her sister (in her sister’s two favorite colors). She then settles on Pony Barbie for herself. Haylie also buys crayons for her sister, nail polish, makeup and lipstick for her mom, and socks and fishing accessories for her grandfather.

Druktenis, like most of the participating officers, knows what to expect. Many officers return every year, clearing the first Saturday in December from their work and home schedules.

Kavari Onley arrived at Walmart with a plan, says Officer Scott Long of Frederick Police Department. His sister wanted a My Little Pony toy. Kavari inspected toy tractors and toy dinosaurs, before settling on a Lego Ninjago kit. For mom, he chose a vanilla-scented candle. Long suggested that he had enough money to get her another item. “Moms are kind of special,” he tells Kavari. Kavari and Long then sort through throw pillows before deciding on a dark blue fleece blanket.

While Kavari is prepared for his siblings and mom, he is less certain about what to get his stepfather. Kavari’s stepdad is a Baltimore Ravens fan, however, so that makes the choice easier. The pair settles on some Ravens gloves. Then it’s time for Kavari to choose something for himself. He picks a Nerf gun.

Easton Hamilton, also 6, of Green Valley, gets double the attention. State Trooper Scott Robertson is joined by Deputy First Class Teresa Holland of the Frederick County Sheriff’s Office to help him make good choices. “I have grandchildren,” Holland says with a smile. She is clearly enjoying this chance to show Easton the ropes of shopping.

Easton’s first choice is Milk Bones for his dog, Roxy. He chooses hats for his grandmother and his mother’s boyfriend, and Hot Wheels for himself. “He’s just started opening up,” Holland says of the kindergartener, one of the youngest children in the Shop with a Cop program. Easton chats happily with Holland and Robertson. His blinking, lighted shoes add color to his steps as he excitedly places items in the shopping cart Robertson manned.

Easton’s toughest shopping decision is what to get for himself. Holland helps him look through the toy shelves as they consider Iron Man or Spider-Man figures, Nerf guns and Monster Jam. “This is why you bring the lady with you,” Robertson says. “She has a handle on it.”

Frederick Police Officer Kristen Kowalksy stands in the checkout line with Nathalie Paez Martinez, 10. Nathalie lives in Whittier. With Kowalsky’s help, Nathalie fills her shopping cart with a hat for her grandmother, slippers for her grandfather, jewelry for her mom, an action figure for her brother and Slime for her friend. “Slime’s the big thing,” says Kowalsky with a laugh.

That isn’t all, however. Nathalie gets a headband and candle for her aunt and bracelets for Kowalksy and her cousin. Kowalksy is touched that Nathalie insists on buying her a gift, saying she won’t open it until Christmas. “It’s a good fun day,” Kowalsky says. “Because we get to spend time with you,” Nathalie adds. Kowalksy treats Nathalie to a ride in her squad car with lights flashing and the siren sounding.

Optimist International focuses on helping youth and the local club decided to start the program after learning about similar programs by other clubs in the region. Hoffman takes notes as the day unfolds, making sure each child is satisfied, and looking out for ways to improve what is already a day most kids will long remember.

The club partners with Frederick County Public Schools to select the children who participate. School counselors recommend children based on factors that include family income, recent circumstances and illness. While some children come from low-income families, others have suffered through their own illness or the loss of a close family member, and others need extra encouragement to engage with people.

Each year, the club also hosts a summer program, Fish With a Cop, in which boys and girls and their officer friends go to Camp Airy pond in Thurmont to bond over fishing poles in the tranquil outdoor setting. Officers and club members clean and grill the catch, along with hot dogs and hamburgers.

Like Shop with a Cop, counselors select kids they think would get the most out of a fishing outing. As part of the program, the children get to keep the rod and reel they use to catch fish.

The Optimist Club also showcases young artistic talent through the Optimist Talent Show. The talent show awards prizes of $500 to the top competitor, $200 to category winners and $100 to each contestant. This competition is a mainstay for Frederick’s artistic youngsters and has been part of the Frederick arts scene for more than 30 years. Talents include dance, vocal, musical instruments and dramatic monologue.

To support its youth programs, the club’s main fundraiser is the club’s September car show, usually held on the parking lot of Wegmans. Classic car, truck and motorcycle owners and fans come to see these nostalgic relics and marvel at the technology of the past. The show generates about $1,800 a year. “Everything’s for the kids,” Gamber says. Optimist’s International’s slogan is, “Friend of Youth.”

Jane Martin has headed the wrapping station at Trinity United Methodist Church in Frederick for years. Each January, Martin, an Optimist club member, and an army of friends and relatives watch for sales of holiday gift wrap, bags, tissue paper, gift tags, ribbons and other gift wrap accoutrements. Martin zeroes in on any CVS within a 50-mile radius of Frederick, because of the store’s variety. “I’m a woman on a mission,” she says. “I’m making notes as we go.”

This year’s post-Christmas gift wrap shopping spree was especially fruitful. Employees at the CVS at 1460 W. Patrick St. saved several shopping carts full of wrapping supplies for Martin. She bought rolls of $4.95 wrapping paper for $49 cents each, and gift bags for as low as 12 cents each.

Optimist volunteers await at tables in Trinity’s Activity Room as excited kids approach with bags of gifts. Volunteers are surrounded by festive wrap, gift bags of all sizes, fat bows and plenty of rolls of tape and pairs of scissors. As the kids arrive, they approach the waiting volunteers.

After the kids finish wrapping, with a little help from the Trinity volunteers, they race off toward the basketball area. They shoot some hoops and play a little dodgeball with the officers, working off some of their energy and working up an appetite.

The youngsters and officers take those appetites to the final part of the day: lunch at Outback Steakhouse. The squad cars parade down West Patrick Street toward the restaurant. Upon arrival, clusters of four to six kids and officers claim booths and tables, filling up most of the restaurant. “It’s a nice way to end the day,” says one of the officers before focusing on the menu.

Darrick Scott and Jeremy Tindall of Frederick City Police sit with Wesley Sheriff, 7, and Ezekiel Rodriguez. The foursome looks forward to the sodas, chicken tenders, fries and burgers they ordered to cap off what had already been a long, active day. “It’s good to give back,” Scott says.