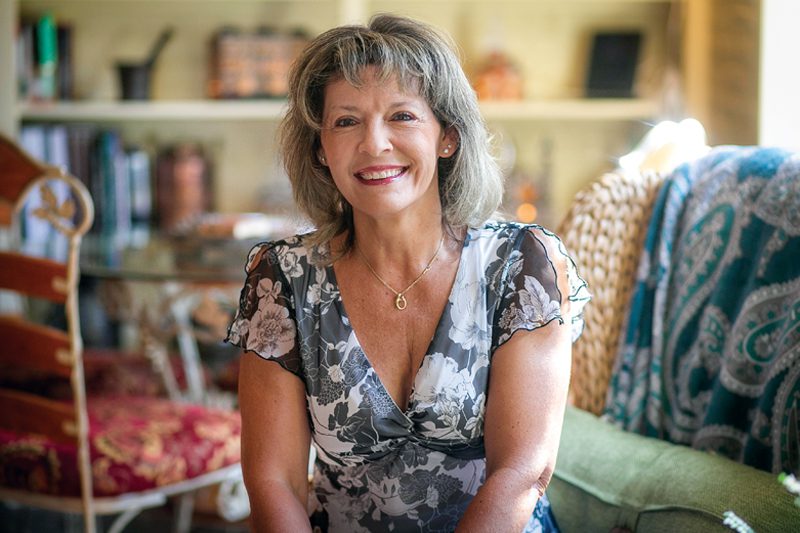 Andrea Faris Roberts knows what caregivers need most and that is rest. Roberts, whose son Reece was born with Down syndrome, knows the exhaustion that accompanies giving care and how tough it is to pour energy from an empty cup. It is why she created A Mother’s Rest, a nonprofit that provides free weekend retreats for caregivers at New Market’s Hammond House and Schell Tavern.

“Respite is decompression and fellowship. It is being away to find the old you,” Roberts explains. “Many women feel they have lost. It’s hard. We’re not looking for pity. We just need help.”

Like Roberts, many of the caregivers who seek solace and respite at A Mother’s Rest are mothers of children with special needs. Others are supporting wounded veterans, disabled spouses or aging parents. All of them, like Roberts, share a need to take time for themselves, away from their taxing responsibilities.  Away from being needed 24/7.

At the time Roberts had Reece 17 years ago, she was earning six figures in the telecommunications industry with no thought or desire to be a stay-at-home mom. But after Reece, who also has ADHD and sensory processing disorder, she decided to give up her career to devote her time and attention to his care. “That was a big shocking crisis for me,” Roberts says recently, inside Hammond House, a stately dwelling located on Main Street that was built in 1798 and updated in 1830. Roberts has also done work on the house since purchasing it in 2018.

“After he was born, I grieved in ways that are hard to put into words. I had heartbreak for what felt like the loss of my life and loss for what I wanted for my son. I struggled for a long time with Reece,” she says.

In 2005, Roberts turned that grief into a plan to help others in need.  “When he was about 3, I found out what happened to Down syndrome [children] abroad. These babies are sent to baby houses and then adult mental institutions at the age of 4,” Roberts explains, citing the Ukraine, Russia, Bulgaria and China as countries that were participating in the practice.

A year later, Roberts started Reece’s Rainbow to help offset the costs for U.S. citizens interested in international adoptions of children with special needs. The organization was the first of its kind in the nation, she says.

Through the success of Reece’s Rainbow, Roberts pursued expanding the nonprofit charter to include post-adoptive respite care for families. However, the organization’s board declined to expand the mission and Roberts amicably stepped down and decided to start another nonprofit that would give caregivers time to recalibrate.

Thus, A Mother’s Rest was born. The way it works is caregivers apply to be accepted into the various three-day weekend retreats at Hammond House. Once they are accepted, room and breakfasts are covered. Guests have to find lunch and dinner on their own—not a hard thing to do in historic and picturesque New Market. Although retreats are free, many leave donations to help offset costs.

Roberts says the attraction of her weekend retreats is that they are completely designed around rest, fellowship and fun. Most retreats offered elsewhere for caregivers, she adds, include a busy schedule of speakers and programming that often focus on the children instead of the caregiver.

It’s rare for caregivers to get a break to just relax. A Mother’s Rest fills that void. It is the type of place Roberts says she needed, even when she was heading up Reece’s Rainbow.

“Because I was a public figure, I didn’t have a place to grieve; to talk about my life and my challenges. A Mother’s Rest is that safe space to be able to share your struggles,” Roberts says. “We don’t do counseling or educational programs. We let the moms counsel each other. Most moms just need someone to listen. They’re not looking for answers. They just need to be able to say it.”

Walking around the Hammond House is a tour of what was once an old tavern, a parlor, six residential rooms—Auntie’s Escape, the Maryland Heritage Room, Evelyn’s Hope, Beth’s Blessing, Cynthia’s Chance and Kathryn’s Gift—and several bathrooms. There are three staircases, many fireplaces and a backyard perfectly suited for weekend escapes. There’s even a basement where visitors can go to play games.

“This house chose me,” Roberts says. The house once belonged to Oliver Byron Hammond, his mother and siblings, who moved in the house, off of their farm, once their father, Grafton, passed away suddenly in 1846. Roberts discovered during genealogy research that she is related to the Hammond family by marriage.

The restoration of the house is symbolic of the renewal A Mother’s Rest hopes to achieve in each of its weekend guests. “Our key theme really is about restoration in our lives. About restoring history, heart, health and hope,” she says. “And that’s me. I love history—genealogy—the whole story of how we got there. Just being able to restore and heal these caregivers.”

At first, Roberts says she wasn’t sure the town understood what she was aiming to do. However, New Market businesses and residents fully embrace the nonprofit now, she says. “I don’t think they realized what we were bringing to town,” she explains. “The town’s been great to work with. They are very supportive of the mission. I don’t think they recognized how special this mission is. We will become a big draw for people.”

The respite weekends are themed and are open to mostly female caregivers. This year, there was a caregiver retreat for dads around Father’s Day. Roberts says there is a retreat this month for adoptive moms. There is typically a retreat for women caring for parents or spouses with Alzheimer’s disease. There have been retreats for parents with drug-addicted children.

By the end of this year, A Mother’s Rest would have hosted 49 respite weekends, and with each one, there are typically more than 10 people on the waitlist.

To keep the respite retreats free to caregivers, funds are raised through private donations. Roberts says in the future, she’d like to see insurance companies cover the expense. “We are redefining the word respite because the state of Maryland, to them, respite is sending a caregiver into someone’s home,” Roberts says. “We’re removing caregivers from the caregiving environment. They’re doing all these things they need to do without their kids.”

Eventually Roberts sees renting out the house for small weddings and family reunions to bring in more revenue to offset the costs of the caregiver retreats. She also embraces local events like the free Christmas in New Market event on Dec. 7, where she will open up the house for tours from 10 a.m. to 4 p.m. The gift shop will also be open for purchases and donations.

“It’s much more of a health initiative than a charity,” Roberts says of A Mother’s Rest. “This is preventative health.”