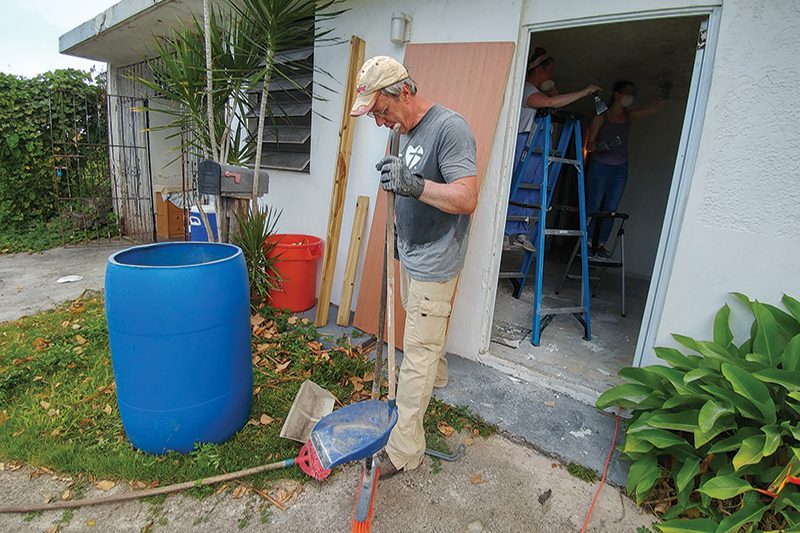 Seated next to the plane’s wing, my vision was limited as we descended into San Juan, Puerto Rico, but others on the plane with a better view were shocked by the large number of blue tarps still covering rooftops two years after the back-to-back destruction from hurricanes Irma and Maria.

I had traveled to Puerto Rico in the past, but as someone who strolled the cobblestones of Old San Juan enjoying restaurants, shops and street musicians, or relaxing on a beach soaking up sun, lulled by crashing ocean waves. On this visit I was part of a mission trip called Building Puentos (bridges), an effort by the Lutheran synods of Maryland, Delaware, Washington, D.C., and the Caribbean to help residents rebuild their storm-damaged homes.

It was also a trip that came two months after the death of my father, who had traveled several times as part of a team to Puerto Rico to do just what I was about to undertake. Building Puentes would become an outlet for grief as well as a way of honoring my dad. Before leaving home, I thumbed through old photos of him, his fellow church members and the Puerto Rican residents who worked alongside them. Everyone had wide smiles and a proud look of accomplishment. I saw similar expressions when I looked at photos from my trip.

Anytime he started a trip, my dad expressed his excitement at getting underway by saying, “It feels like I have rabbits on my feet.” I knew the feeling, anxious for new experiences.

Our week in Puerto Rico happened to coincide with massive protests against a governor accused of a list of misdeeds including syphoning off hurricane relief aid for himself and his cronies, as well as a release of emails that showed him and other officials belittling those struggling to rebuild and even those who died in the storms. More than a million people—total population is around 3 million—streamed into San Juan, carrying signs and pounding drums, resolved to kick him out of office. Their mission was carried out within days.

This grassroots effort to clean up government corruption was not unlike our team’s efforts of getting dirt under our fingernails and straining muscles to work with our new friends to make physical improvements to the island. In my conversations with residents—whether those with houses being repaired, a woman on the beach with her kids, shopkeepers or waiters—the two efforts often intermingled as we talked. The woman on the beach teared up when talking about the importance of people shaking off their apathy and taking on re-sponsibility to begin making positive changes. But it’s not a lesson just relegated to Puerto Rico, we both agreed as she handed her son a beach towel.

The base of operations for our group of 57 volunteers, including seven of us from Evangelical Lutheran Church in Frederick, was a church camp in Dorado, a short distance from San Juan. Thankfully, the last of the bunkhouses had been equipped with air conditioners just before we got there, the mechanical hum blending nicely with the song of tree frogs. Beds were indeed bunks. Without much discussion, we older ones claimed the lower berths while the teenagers hoisted themselves to the top without benefit of a ladder. In our cabin, six women shared one bathroom. It wasn’t always pretty, but who wants to mess with makeup when it just runs off your face in the punishing heat? A quick, cold-water-only shower to wash away paint and roof sealer was more to the point.

Grouped together as we were, it was a good way to meet new people, not only peers, but millennials who understood and appreciated your humor as well as made you still feel relevant. It was an opportunity to see first-hand that when you get down to it, the next generation will have it handled.

Overseeing the mission was the Rev. Mark Parker, pastor of Breath of God Church in the Highlandtown neighborhood of East Baltimore. A multitasker if ever there were one, he managed work schedules and building supplies, as well as arranging day trips for our down time. He acted as an interpreter for those struggling with Spanish or English and could tear up a dance floor with his Salsa moves. He routinely served himself last in the chow line and was our voice of encouragement at the end of a long day.

I remember my dad joking that in Puerto Rico every meal was either beans and rice or rice and beans. Not too far from the truth, but we also were served chicken and pork and the table always had plenty of fresh fruit, some of it gifted by the people whose houses were being repaired. One team came from their job site loaded with bags of star fruit from a man’s yard.

Some of the residents didn’t stop there. One lucky team had a couple that one day cooked ribs on a grill and served them with mashed potatoes, the next day putting shrimp on the menu. But for the majority, it was a packed sandwich of peanut butter and jelly or meat and cheese, with a bag of chips and a piece of fruit. The woman on our site beamed with pride to be able to pass around cookies as a mid-morning snack. Water was an important commodity and we were constantly reminded to stay hydrated.

Begrudgingly, I have to admit that the ones who were treated to cooked lunches deserved them as their work assignment including hauling roofing supplies up a hill that had 55 steps to navigate, then climbing onto a flat roof bathed in blazing sunshine to replace sheets of corrugated metal or apply sealant. Next door a woman tried to shake down the team for money to park in front of her house. As is typical of human nature, good still outweighs bad and a neighbor told the hustler to think again. And, as added proof, a truck full of teens stopped and insisted on helping to hoist supplies up those arduous 55 steps.

The roof crew had its share of triumphs as well as a few setbacks, like how the skies opened with heavy rain just as they had finished rolling sealant over the roof, white-colored water rushing out of the downspout.

Jobs varied from replacing water-warped interior doors to swapping out old louvered windows with ones that could easily be opened to let in ocean breezes or closed against the rain. The houses we worked on were made of concrete and we grabbed handfuls of cement from large buckets to fill the gaps around the newly installed windows.

Scraping off the old paint was also on the list, sometimes aided with a pressure washer, but mostly with a scraper and plenty of elbow grease, the mess continually needing to be swept from the floor. Once the peeling paint was addressed, out came the brushes, rollers and step ladders for the next part. My dad was always trying to make me a better painter, critiquing the way I held my brush and the direction of my strokes. I could hear his voice in my head telling me to stop making such a mess.

Many of the residents jumped in to help if they could, including a youngster named William who was given his own pair of work gloves, which he wore non-stop. Later, the crew went to Walmart and got him a kid-sized hard hat with his name on it.

Our last afternoon finished with a few more licks of paint and moving furniture back to its intended spot. Brushes were held under an outdoor spigot, getting them cleaned and ready for the crew coming the next week. The woman who lived there and had been at our side for several days with her bags of cookies and a broom, wasn’t quite ready to see us go. She motioned us into a circle on the front lawn, everyone grasping hands and bowing heads. Through an interpreter, she expressed how in a dream she saw help arriving for the family, the vision becoming reality with our arrival. She prayed her gratitude and she prayed for our safety as we left Puerto Rico for home. Dad would have loved this trip.