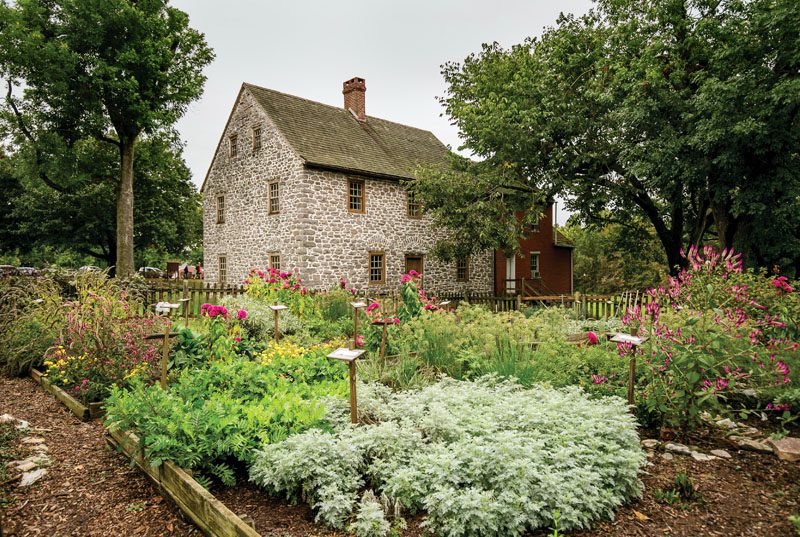 Is it Still Hip to be Historic in Frederick County?

For those at Frederick County Landmarks Foundation, which owns and operates the Schifferstadt Architectural Museum, the headline had to set off alarms: “Why Are We No Longer Visiting Our Nation’s Historical Sites?” The accompanying article, shared on social media by the organization, certainly painted a worrying picture—not just for one of Frederick’s most recognizable historic sites, but a sizeable segment of the local economy.

Nationwide, there have been signs that history could be losing its ability to lure tourism dollars. Take a look at the National Park Service’s five main Civil War battlefields, which have experienced a 70 percent drop in visitors since 1970. Colonial Williamsburg attracts half the numbers it did 30 years ago. And overall attendance at historic sites and museums has steadily declined over the last decade.

Close to home, Gettysburg National Military Park logged less than a million visitors last year, a far cry from the almost seven million who made the pilgrimage to the battlefield in 1970. Antietam National Battlefield had just over 325,000 visitors, less than half the number who visited in 1976. Harpers Ferry’s 2018 attendance barely broke the quarter million mark, far below its peak of more than 900,000 visitors in 1987. And here in Frederick County, Monocracy National Battlefield’s attendance fell from nearly 114,000 in 2017 to fewer than 85,000 in 2018.

But do those declining attendance figures spell disaster for a community that markets itself as “Hip & Historic?” Not necessarily. “Our museum is growing rather than shrinking,” says David Price, executive director of the National Museum of Civil War Medicine on East Patrick Street in Downtown Frederick. “Our numbers have grown over the last five years.” A block away on East Church Street, Heritage Frederick’s Museum of Frederick County History is seeing a similar uptick in visitors. “Our attendance has doubled this past year,” says Mary Rose Boswell, the organization’s executive director. “I guess we’re bucking the trend.”

And, while Monocracy National Battlefield’s attendance did fall in 2018, the 113,820 people who visited the park in 2017 were also a record. Even the “down” 2018 was the third-highest attendance in the park’s 28-year history—more than double the number of visitors a decade ago. “As a newer park, we’re still kind of growing our attendance,” says Jana Friesen McCabe, chief of resource education and visitor services at Monocacy.

The total number of tourists in Frederick County is still going up and visitor spending has grown over 35 percent since 2010, according to statistics from Visit Frederick, the county’s tourism agency. “For the people who come the farthest, history is still the number-one attraction, and they tend to stay longer and spend more money,” says John Fieseler, executive director of Visit Frederick. But history’s exact draw is “hard to tease apart,” according to Fieseler, since even raw attendance numbers can be deceiving. Says McCabe, “How many come here on a Saturday morning just to hike the loop with their dog?” That’s data right now that we just don’t have.”

The county’s tourism landscape is definitely changing, though. According to Visit Frederick’s surveys of guests at the Frederick Visitor Center on East Street, historic sites were the fourth-most popular reason to visit a year ago. But in the recently completed fiscal year, historic sites slipped to sixth place, even as the county’s total number of visitors climbed. “What we’re seeing here is that history is still a big draw and continues to grow, but the other reasons that people come to the county are growing faster,” says Fieseler. “There’s so much more for people to do and see today, attractions that didn’t exist five, 10, 15 years ago,” says Tiffany Ahalt, administrator with the Landmarks Foundation.

Diversifying tastes could actually protect the local tourism industry against large fluctuations in any one sector. “We’re lucky we don’t have all our eggs in one basket,” says Fieseler, citing the growing variety of attractions that bring tourists and day-trippers to the county, everything from outdoor recreation to the thriving restaurant and craft beverage scene in Downtown Frederick.

Those diverse options not only give Frederick the ability to adapt to changing tastes, they’re also a competitive advantage, according to Price at the Civil War medicine museum. A historic site like Colonial Williamsburg, he says, “has such a strong identity that fits neatly into a box and you kind of expect the experience you’re going to get.” And once they get it, “they’re going to check that off their bucket list” and perhaps never return. “The beauty of Downtown Frederick,” Price says, is that, thanks to an ever-evolving mix of shops, restaurants, museums and other attractions, “visitors can create their own experience and come back and create a whole different experience.”

The ability to craft new experiences can also spell opportunity for established attractions such as Price’s. This past September, the museum partnered with Surelocked In Escape Games—among the several “escape room” businesses operating in Frederick—to produce “One Vast Adventure,” an interactive, live-action roleplay game based on the 1864 Ransom of Frederick by Confederate Gen. Jubal Early. The event sent hundreds of players scurrying around Downtown, interacting with costumed characters and solving puzzles to prevent Early from torching the city. “We sold out the first year of the event because it was a unique, fun experience,” says Price.

Heritage Frederick is employing a similar strategy. “We have a creative team, we’re not afraid to think outside the box,” says Boswell. “Our mission is to promote and share the history of Frederick County, but it doesn’t say how we have to do it.” Capitalizing on the recent explosion of craft brewing, both nationally and locally, Heritage Frederick recently went on the road, hosting a happy hour lecture on “Beer and the Civil War” at The Main Cup restaurant in Middletown. “It was so well-attended that we had to turn people away,” Boswell says.

“To remain competitive, you’ve got to reinvent yourself, partner with folks and create reasons for people to come back,” says Ahalt. “Museums all over the country, and the world, are trying to figure out how to stay relevant,” says Fieseler, adding that traditional “house museums”—historic homes restored and furnished to a particular period—have seen some of the sharpest declines in visitors.

“Once you see the inside of a house, you’ve been there, done that,” says Boswell. But, while located in the 1824 Baltzwell house that was home to the Loats Female Orphan Asylum for many years, Heritage Frederick’s isn’t a traditional museum. Instead, the old mansion’s main rooms are used as galleries for a variety of rotating exhibits. “We can change them multiple times a year and encourage people to come back again and again,” says Boswell. Since 2018, one of the museum’s main rooms has also been home to The Snallygaster’s Exploritorium. Named for the mythical dragon-like beast said to haunt Middletown, the Exploritorium is an interactive exhibit aimed at small children. “One of the things that museums can do is that we can encourage a shared learning experience between adults and children—and when you do that, you can build a strong family bond,” says Boswell.

Rotating, family-friendly exhibits aren’t all that Heritage Frederick has done to broaden its appeal, though. Previously known as the Historical Society of Frederick County, the nonprofit organization rebranded itself in 2017. “It was a two-year process,” says Boswell. “We created a new strategic plan and during that process we decided on the name change. The ‘Historical Society’ had kind of a perception of being exclusive, and we wanted to be inclusive.”

Inclusivity is also a goal at the Monocacy National Battlefield. “The battle is our primary reason for being here, but there are lots of other stories for us to tell and we’re looking at diversifying the way that we tell those stories,” says McCabe. Those stories include the fact that Frederick Junction, just south of the battlefield visitor center, was one of only two recruiting stations in the state for United States Colored Troops and that enslaved African Americans found themselves caught in the battle’s crossfire. “The Worthingtons [who lived in a home on the battlefield] owned eight slaves and they were in the cellar, as well, hiding with the family,” says McCabe. “How do we find out more about their stories?”

But in 2019 America, could telling these stories be controversial? Across the country, issues such as the removal of Confederate memorials and honestly addressing the issue of slavery during plantation tours have prompted protest, as the Museum of Civil War Medicine recently discovered. In August, the museum announced that it was redesigning its logo, which currently includes the Confederate battle flag, and launched a public survey to solicit feedback. “We wanted to go through an open debate and get people’s opinions on it, and we weren’t all that surprised by the results,” says Price. However, despite the sometimes-raucous response the announcement generated on social media, Price says the museum is moving forward with the redesign. “The majority of people have a more nuanced view,” says Price, adding that the ultimate redesign will be “based on what’s best for the museum. We want to have a decision [this month] and do an unveiling in December.” According to Price, it’s all part of the museum’s long-term strategy to broaden its appeal beyond Civil War tourism. “You’re going to have a hardcore Civil War person coming here and they’re going to check that off their bucket list,” he says. “So, we’ve been purposely looking at ways to expand our stories.”

Whether that will pay off over the long term remains to be seen. But as the controversy surrounding the museum’s logo reveals, history remains relevant regardless of its popularity. “We’re still dealing with so many of those issues [of the 19th century],” says McCabe. “History can teach us a lot about ourselves and where we are today.”