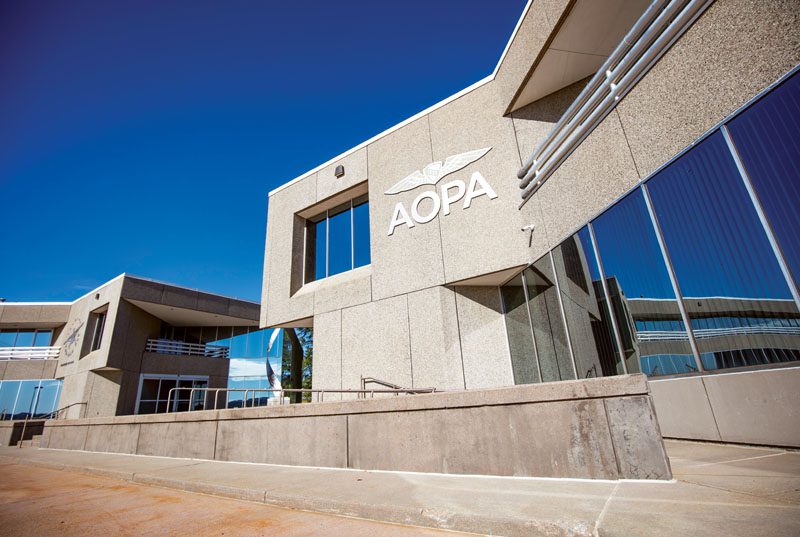 When Dean Stickell didn’t make the cut for his pony league baseball team, he assuaged his broken heart by riding his bike out to Frederick Airport, where he would watch planes take off and land and hope to catch a ride from a sympathetic pilot.

He eventually got his wish. And within a few years, he was no longer a passenger. Stickell soloed at the Frederick airport on his 16th birthday, setting into motion a love affair with aviation that led him to the U.S. Air Force. During his 30-year military career, Stickell flew fighter jets around the world and was stationed in places like Japan, Australia and Europe.

Those travels taught him that America’s general aviation pilots have it pretty good. “There isn’t a country in the world that has the freedom of aviation that the U.S. does,” Stickell says. He attributes much of that to the fact that many people in other countries simply cannot afford to fly. “General aviation is exceedingly expensive,” he says.

That is why Stickell, who is now retired from the Air Force but flies his own Glasair III experimental aircraft, is an active member of the Frederick-based Aircraft Owners and Pilots Association (AOPA), which is celebrating its 80th anniversary this year. “AOPA really advocates for general aviation and helps keep it affordable for us,” he says.

Although AOPA is now headquartered in Frederick, it was founded in Philadelphia in 1939 by a group of pilots who realized general aviation needed a unified voice to keep the airspace open to flyers outside of the military and growing commercial aviation sector.

Thomas A. Horne, author of Freedom to Fly, a definitive history of AOPA, says that need became even greater with the United States’ entry into World War II. “After Pearl Harbor, the federal government was real keen on keeping all general aviation grounded,” Horne says.

But thanks to AOPA’s organizing and advocacy, an emergency pilot registry program was initiated that allowed all duly registered and identified pilots to continue flying in all but a few restricted air spaces. “That enabled pilots to prepare for eventual service in the military,” says Horne, also editor-at-large for AOPA Pilot magazine and AOPA Pilot Turbine edition. In fact, nearly 3,000 AOPA members temporarily dropped out during the war to serve in the armed forces. Other AOPA members supported the war effort by flying Air Guard coastal patrols to locate enemy submarines.

In the years that followed, AOPA has continued to be the voice of general aviation pilots. Whether through the organization’s Air Safety Institute, the “You Can Fly” program designed to build the pilot community or its AOPA Finance arm that helps pilots fund their dreams, the organization is committed to making flying more accessible and affordable for civilian pilots.

No one knows that better than Bruce Jenkins, who has been flying for almost 50 years and hangars the plane he owns at the Frederick airport. When he joined AOPA in 1970, he admits he simply wanted to be around people who shared his passion for flying. “I was very enthusiastic and wanted to talk and learn about aviation,” he says.

It wasn’t until he suffered a heart attack that might have left him grounded for life that Jenkins discovered the true value of his AOPA membership. Thanks to years of advocacy and lobbying by AOPA, in 2018 the FAA approved its BasicMed program that enables general aviation pilots to continue flying as long as they are able to meet baseline medical criteria and agree to certain limitations on the types of flying they can do. For recreational pilots like Jenkins, the new regulations have left them grateful for AOPA’s representation. “I feel I owe AOPA something,” Jenkins says.

A Great Landing for Frederick

Although much of AOPA’s work is meant to benefit those who spend time in the sky, the organization also has a huge impact on the ground in Frederick. It moved its headquarters to the city in 1983 and now employs nearly 250 people, more than half of whom live in the area.

The organization also regularly hosts events that bring thousands of aviation enthusiasts—and their spending dollars—to Frederick, such as this year’s Frederick Fly-in, which AOPA reports brought 11,000 visitors to Frederick over two days. That means lots of hotel nights, restaurant meals, fuel purchases and hopefully a desire for return visits to the city.

The economic impact of having AOPA headquartered at the Frederick Municipal Airport cannot be underestimated, according to Richard Griffin, director of economic development for the City of Frederick. The organization’s National Aviation Community Center, which hosts events designed to build interest in general aviation, is in a hanger it leases from the City of Frederick. And in 2018, AOPA entered a multi-year lease with the City of Frederick for a site at the airport that the organization will develop into a complex that will offer up to 194,400 square feet of general aviation aircraft hangars and nearly double the facility’s storage capacity.

Griffin says AOPA has also proven to be a valuable partner in helping maximize the impact of its municipal airport. “AOPA works at airports all over the country and is extremely well-versed in airport management and has provided a huge amount of in-kind advice on best practices to us,” he says.

With more than 300,000 pilot members throughout the world, AOPA is the worlds’ largest aviation organization devoted to advocating for the freedom to fly. This has become especially challenging given the costs of evolving technology and the regulations that surround it. AOPA has aggressively represented the interests of general aviation pilots who must comply with FAA regulations to install satellite-based surveillance technology in their aircraft by January 2020. Jenkins says he has spent $30,000 updating the avionics in his plane to comply with this mandate.

Over its eight decades, AOPA has witnessed remarkable advancements in aviation, a trend that will continue with the introduction of Jetsons-like vertical takeoff and landing vehicles, as well as drones and other unmanned aircraft. “New types of aircraft will be a part of our future,” says Mark Baker, AOPA president and CEO. “Our staff is working with manufacturers and regulators to assure their safe integration into our aviation system and airspace.”

But perhaps the biggest challenge facing AOPA is the projected global pilot shortage. Boeing’s 2019-2038 forecast predicts a shortfall of 212,000 pilots in North America alone over the next 20 years. Baker says his organization is committed to doing its part to address the problem. “We are striving to meet the global need for more pilots, helping high schools introduce youth to the opportunities in aviation and working to make flight schools successful and efficient in training pilots,” he says.

In the meantime, avid pilots like Stickell and Jenkins will continue to enjoy the freedom of the skies. “People joke that an airplane is a hole in the air that you fill with money, but the joy of flying is hard to describe in words,” Jenkins says. “I have experienced some really special moments while flying, times when I just didn’t want to come down.”