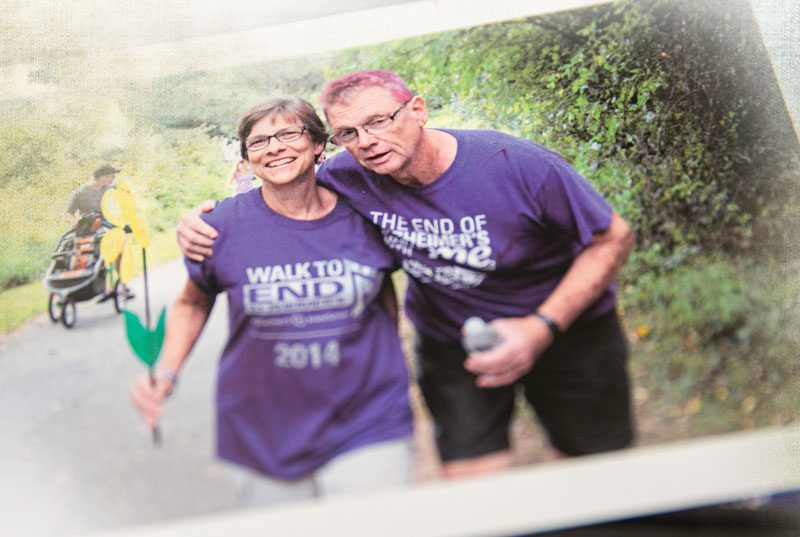 Alzheimer’s Disease Took Her Husband, But Not Her Spirit

Mark Vander Meer loved to drive and on one day in 2014, amid the shock of finally learning that the source of his mental struggles for the past several years was younger-onset Alzheimer’s disease, he was determined to drive home from his therapist’s office.

“I said, ‘You are not driving home,’” his wife, Evie Vander Meer, recalls. “He said, ‘Oh, yes I am.’” So, Mark drove home, with Evie assisting with the steering from her passenger seat. “I should have forced him to pull over, but I don’t know if I could have … because he was in a zone. He wasn’t staying between the lines [on the road] so I was driving from the side while he managed the accelerator.”

That striking day wasn’t the start of the Vander Meers’ Alzheimer’s journey, nor was it the end. Alzheimer’s, the sixth-leading cause of death in the United States, is incurable and diagnosis offers one grim reality. Mark Vander Meer was just 65 years old when he succumbed to the disease last December.

But in Evie’s grief and sense of loss is another emotion—a determined spirit to tell her story and advocate for better Alzheimer’s diagnosis and treatment, maybe even find a cure one day for the disease that claims nearly 100,000 American lives a year, but only after first robbing its victims of their minds. It is estimated that as many as 5.8 million Americans are living with Alzheimer’s disease.

Across the kitchen table of her Whittier home is strewn photographic evidence of her and Mark’s work. There are the trips to conferences and fundraisers, and visits to Capitol Hill and Annapolis to lobby for more money, more research and more help for people going through what they went through. “This is about advocacy here,” she says, pointing to her collection of materials.

They were college sweethearts, both attending Northwestern College in Orange City, Iowa, in the mid-1970s. After graduation there was a wedding and Mark attended seminary in New Jersey, where he would eventually start his own church, affiliated with the protestant Reformed Church in America.

In 1990, Mark once again had the opportunity to start a new church, this time Monocacy Valley Church in Frederick, a place where he and his wife had no familiarity with but would soon come to love. While Mark led a growing congregation, Evie was also active in the church. She used her love of theater to participate in thematic vignettes that supported the weekly sermons delivered by her husband. “We both had a purpose.”

And it continued that way for many years. The couple raised two sons, Josh and Aaron, here and despite Mark’s trailblazing instincts and love for starting new churches, they decided to make Frederick a permanent stop in a profession that doesn’t often afford such a chance.

Life was sweet. Then it wasn’t.

“As a family, we look back and we try to identify what the markers were,” Evie says.

Mark was in his mid-50s when he was experiencing symptoms of depression. He began seeing a therapist. But then there were also struggles with tasks like planning, organizing and decision making, and memory in general. “I noticed that he would forget meetings sometimes, but not often. But what I didn’t know is there was more of that going on at the [church] office,” Evie says.

The depression and associated anxiety worsened. Preaching became difficult, as did even the process of writing a sermon. “None of that was true before, so we knew something was wrong, but we didn’t know what,” she says.

In late 2013, Mark took a medical sabbatical from the church and tried to return in January 2014. “Just three weeks later, he said, ‘I can’t do this,’” Evie recalls. Mark resigned from the church that February.

One of the struggles for many Alzheimer’s patients and their families, especially for those considered young to have the disease, is getting a firm, timely diagnosis. More common reasons behind the mental missteps, such as brain tumors, are first explored, and the patients themselves can also present a roadblock. “They are good at presentation,” Evie says, recalling Mark’s smooth demeanor with his doctor. “They are so good at presentation. You bring them in to a doctor’s office and they are the best they could ever be.”

But Mark’s poor performance in cognitive testing led to a referral to a neuropsychologist, who asked Mark to take a lengthy pencil-and-paper test. The test proved to be difficult for Mark to take, causing him to become extremely anxious and frustrated. “He knew he was failing it,” Evie says. “He’d [later] say to me, ‘Who wants to do something where you know you are going to fail?’” The neuropsychologist stopped the test and asked Mark to come back another day to try it again. He did and he failed.

The formal diagnosis of Alzheimer’s was given to the Vander Meers by Mark’s therapist. “For me, there was a part of me that was like, ‘That makes sense and now we know.’ But I felt like my body kind of froze. It’s a shock.” Sitting in the therapist’s office, Evie took on the role of caregiver, even if she wasn’t completely comprehending what the therapist was saying. She wasn’t the only one. “I could tell Mark was having a hard time taking that in, and I’m not totally aware what that was like for him,” she says.

After the dangerous drive home, the couple considered what was next. Unlike cancer, where an oncologist can put together a plan of treatment, there was no such tangible path for the untreatable Alzheimer’s. That was its own kind of frustration and prompted Evie to learn all she could about the mysterious disease.

“I wasn’t someone to just sit there and say, ‘OK, we are a victim.” And Mark was asking, ‘What is my purpose now?’ … and, ‘Who am I?’ Those were the kinds of questions we were asking and struggling with at home. He said, ‘God called me to be a minister, so, now what?’ So, we had to reconfigure what our purpose was and what gave us hope. Because if you sit in dementia as a victim, you don’t have much hope.”

They leaned on the Alzheimer’s Association for information and education, attending workshops and support groups for those with the disease and their caregivers. Evie read books about the disease and devoured information online. “That was life-giving to do that because then we could start to understand what the disease is and how it affects us, and then make our choices,” she says.

Among the things they learned was the importance of keeping Mark physically and socially active. Mark accomplished the former by walking and joining, with a friend, a local gym; the latter came through participating in a Bible study group. “That turned out to be an incredible decision,” Evie says. “It was a great feeding of the soul just by being with the men because they accepted him right where he was.”

But Bible study also revealed the progression of the disease, as Mark found it difficult to read and he struggled to contribute to the group. He developed primary progressive aphasia that affected his speaking ability. “He would try to say something and it didn’t come out … or he would say something and it just didn’t make sense,” she recalls.

To the uninitiated, Alzheimer’s disease can sound like someone simply losing his memory, but the reality is messier and more complicated. As Mark’s symptoms worsened, it affected him in a variety of ways—from his ability to eat, his anxiety with unfamiliar places and large groups of people, and his need for constant attention, which usually meant Evie. For her, something as simple as making a telephone call became an exasperating exercise because Mark would insist on being just a few feet away, often interrupting her conversation.

“I know at different stages we would say, ‘OK, we are at a new normal.’ That’s language the health system likes to use and I began to hate it,” she says.

As expected, Mark’s disease worsened with time and drugs that offered the potential to slow the growth of Alzheimer’s didn’t seem to be working. There were mood swings, anxiety, sadness and Mark began having difficulty eating. A large man—6 feet, 3 inches tall who had once weighed around 230 pounds—he began to shed weight and would eventually weigh as little as 140 pounds.

But while Mark had forgotten Evie’s name, the bond between them remained. “I believe Mark always knew I was his wife. He always engaged with me. We engaged as husband and wife. I am always thankful for that.”

Still, Evie knew Mark’s time was short, so the family organized a trip west in June of last year along with other relatives. At Olympic National Park near Seattle, the family posed for a portrait in front of snow-peaked mountains. Mark is smiling. “I knew then that it would be the last time that we would all be able to go [on a trip] together,” she says.

Evie had already left her job working with those with disabilities to become Mark’s fulltime caregiver, but near the end of summer that was becoming too much of a burden and he needed professional care. In September of last year, Mark was moved into an assisted-living facility in Pikesville. Evie made sure the family photo from the trip came with him. “We chose to have that in his room so that those who cared for him could see that it wasn’t long ago that this is who Mark was, and that who they saw was entirely different.”

But Mark’s declining health was now in a free fall. His lack of appetite paired with his constant anxious desire to walk caused more and more weight to be lost. By December, he was eating just a few bites of food a day and only sleeping a couple hours a night. “We knew then that we were headed for the end.”

One blessing for the Vander Meers was being able to move Mark into the Kline Hospice House near New Market, where he was able to spend his final days surrounded by his wife, sons and other family, friends and those who knew Mark from church and elsewhere. “People just poured in and it was just the best three days I could ever imagine,” she says. “It was a really beautiful time.” Mark died on Dec. 22.

Evie, now 65, knew something about grieving since Mark had to deal with it so much in his profession. But it was different taking the path herself, and alone. She began seeing a grief therapist and joined a support group. One thing she realized quickly is she wanted to continue her work—her purpose—of being involved in the Alzheimer’s community.

“I thought, ‘What do I do? Just stop with the Alzheimer’s world?’… I felt like it would be just another loss and I wasn’t prepared for that,” she says.

So that’s why you could find her visiting a lawmaker’s office, making her case for more Alzheimer’s funding. Or maybe you will see her on an Alzheimer’s Association panel discussion, talking about her experience as a caregiver. Or you might see her quoted in the news or posting on social media. The important thing for her is to further their mission that started years ago and didn’t end with Mark’s death.

“I’m just going to keep taking this forward. It doesn’t end here. It can’t. It’s not just all about us. Hope is everything.”