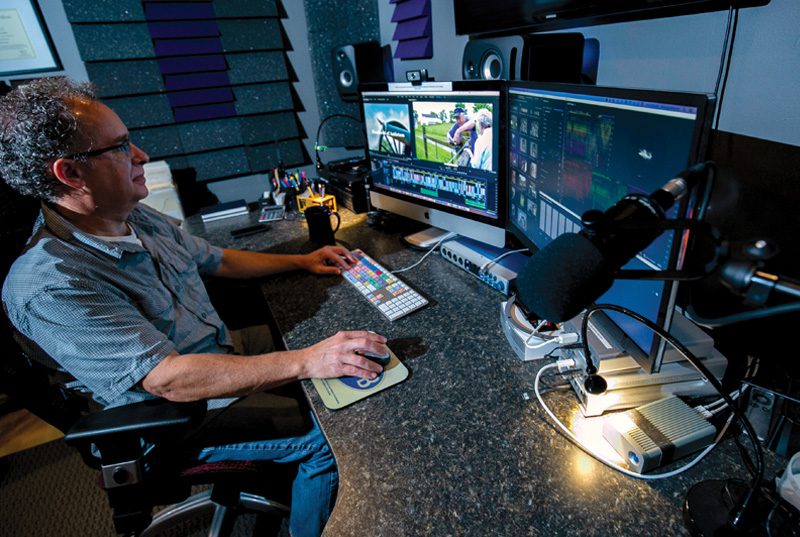 Emmitsburg Filmmaker Conrad Weaver grew up with a camera in his hand. But it was only in the past decade that he realized his true passion for creating documentaries that have an impact on people. “I want to make a difference in the world,” Weaver says. “And the way I choose to do that is through the stories that I tell.”

Whether it is the story of a drought in the West and how we use water or a story portraying how a school in Guatemala is working with the families of kids who live in a garbage dump, Weaver says it’s the projects that provide meaningful work that he enjoys the most.

That passion shows in his most recent work to date, Heroin’s Grip, a documentary that frames the growing opioid crisis at the local level. “I wanted this documentary to focus on three elements: the impact on our community, the impact on families and the impact on individuals,” explains Weaver. “I worked with four families—two who lost their young people to overdoses and two whose young people are in recovery.”

The documentary tells their stories while weaving in angles from the local law enforcement and medic perspective as well. “I spent a lot of time with the Sheriff’s department and Frederick City Police, as well as the medics,” says Weaver.

During one of those ride-alongs, Weaver witnessed the scene of a fatal overdose with Frederick police. “When you roll up on a fatal overdose, it hits you hard,” says Weaver. “I had to go home that afternoon and just kind of decompress because it was all very real. But then I got to thinking about the officers and the medics who see this week after week after week. That has got to be a very challenging thing to have to face every time you see it.”

Weaver says while doing research for the project, he learned that the most recent statistics from 2017 show that a life is lost to overdose in the United States every eight minutes. “When you think about it, that’s staggering. That’s somebody’s brother or sister. Their mom or their dad. And that’s something that we can’t sustain here in this country,” he adds.

Statistics like that are what drove Weaver to make the film. “I like to tell the story that I was just a guy living in the neighborhood doing my thing, making films and hearing these stories thinking, ‘It’s not my problem. Why should I get involved in that issue? It seems really messy,’” says Weaver. “But I kept hearing the news stories of people my kids knew and went to school with who died. And then a friend of mine who lives here in Frederick went public with her story of her son. It really got me thinking more about this. I realized that this is a really serious issue that has a compelling story that I think needs to be told.”

Weaver’s motivation for the film was to help the uninitiated, like he was, see the problem through the eyes of those with addiction. “I want to help people like me who are not touched by addiction, who are not directly impacted by a family member or a close friend just truly understand,” he says. “It’s messy in so many ways. I want the people who watch this film to come away saying, ‘I need to have more compassion.’ Because you really don’t know their story. These people who are using, they have loved one. They have people who care for them. They’re caught in something that they didn’t plan on getting caught up in. No one wakes up one day and thinks, ‘I’m going to become a heroin addict today.’”

He tells the story of one documentary interviewee who said he went to Baltimore eight times a day to get drugs. “I got to thinking, ‘Who would choose to do that?’ Nobody. It’s the heroin talking. No one would want to do that or have that kind of life,” he says. “So, if I can change some people’s attitudes about that then I’ve accomplished my goal.”

While it has not been publicly released yet, Heroin’s Grip has been well-received and won several awards, including the Award of Excellence from the Accolade Global Film Competition and it was chosen as the Official Selection of the 2019 Maryland International Film Festival. Weaver says showings are currently being booked both locally and across the nation. The documentary will be released on Amazon’s streaming platform this month.

“The recovery community for the most part really loves the film,” he says. “They feel that it tells the complete story of addiction and recovery, and it really gives hope. It gives hope to the viewer. It gives hope to the user. It shows that there is hope. You can recover. You can get through this and have a normal life. And we show those stories of people who are doing that.”

Weaver’s company, Conjostudios, is a play on words that combines the names of  he and his wife, Jodi. “Even though she’s not a part of my business directly, she greenlights all my projects,” says Weaver. “She has a really good intuition, so she’s an integral part of the business in that she supports me 100 percent.”

Conjostudios was created while the couple was living in Colorado and Weaver was doing marketing and editing work for a publishing company. “My job sort of shifted around and I ended up moving to Maryland in 2002 and working for Frederick Christian Fellowship Church,” says Weaver. “That’s really where I got my start in video.”

Conjostudios incorporated in 2006 and Weaver went full-time with his video work in 2008.

He is now working on his first feature film, currently titled Scars of an Orphan. “I’m about halfway through the script based on a true story about a Ukrainian orphan,” he says.

To view the trailer or for information on booking a showing of Heroin’s Grip, visit the film’s Facebook page or go to www.heroinsgrip.com. For more information on Conjostudios or Weaver’s other projects, visit www.conjostudios.com.