Where All the Food Trucks At? 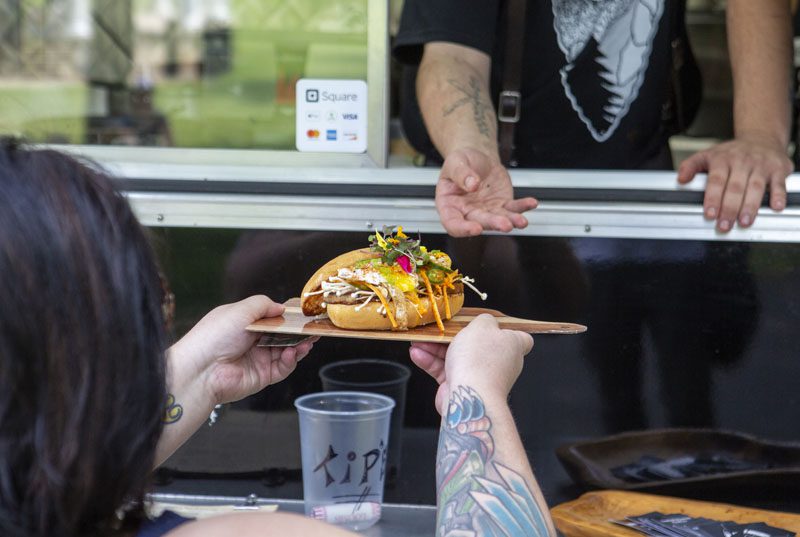 I feel a little bit like Cleavon Little asking a similar, but altogether different, question in the Mel Brooks cinematic masterpiece Blazing Saddles. While his question has the same tone, mine asks about a very serious problem here in Frederick. Where are all the food trucks? Now, I know that they occasionally are at Baker Park. I’ve been told (by many, many people) that some breweries have food trucks sit outside their taprooms.

This, however, isn’t super helpful for, let’s say, a worker Downtown who is tired of going to the same places for lunch or a tourist on a Wednesday afternoon who would be tempted by the smells and sounds that can only come from a food truck or street stall. Or someone who doesn’t go to bars and breweries (those people exist!).

Food trucks and street stalls allow many talented chefs who either like their money too much to open a brick-and-mortar restaurant that can hemorrhage money like a shotgun wound to your bank account or don’t want to work for anyone else but can’t afford or have the credit for a large bank loan. Mr. Drysdale generally doesn’t look too favorably on people with lots of crazy ideas and lots of tattoos (see chefs).

So, with minimum investment and a place to park, chefs can really experiment with their wildest culinary creations. Not held down by someone else’s recipes or ideas, they are free to do things to your mouth that your parents would definitely not approve of. Think about the Korean taco from the most famous of all food trucks, Los Angeles’s Kogi truck: Two cultures that would almost certainly never be brought together suddenly takes a fresh corn tortilla, puts grilled bulgogi, kimchee, green onions, sesame seeds and a spicy sweet sauce on it, and BAM, a masterpiece for next to nothing. A masterpiece that people actively seek out daily. They line up like Jeff Bezos is giving out $100 bills stapled to free Amazon for life memberships.

Not only can chefs go creatively buck wild, but consumers benefit as well. In a food truck park, you can have fried street corn with crushed Flamin’ Hot Cheetos, some deep-fried pierogi topped with chopped barbecue pork and thin crispy onion rings, octopus and eel sushi rolls, an empanada, three cannoli, a duck spring roll with spicy peanut sauce, and homemade ice cream sandwiches made from artisanal goat milk (just to recount one of my trips to a food truck park in Atlanta). Food truck chefs are the Salvador Dalís of the culinary world.

They also have the added benefit of shaking up a restaurant industry that can get a little too comfortable with itself. Fancy-pants restaurants can sometimes make you feel like you’re just another table-turn, and the sticker shock when the bill arrives can cause your accountant to raise your wallet threat level to DEFCON-1 and scramble the fighter jets. For one-third the price, you can feast at street stalls. Feast like Jabba, I say!

Maybe it’s the local Frederick government that doesn’t allow for such places to be all up and down Market street? Maybe it’s pressure from small business owners who don’t want the heavenly smells that come from a little stall operated with love, taking some business from their already well-known establishments? Whatever it is, it needs to be sorted out tout de suite. Carroll Creek would be a perfect place to see carts and trucks with chefs set up on both sides of the water. If we can’t get them in a foodie-loving town like Frederick, where is the hope for the rest of America? Do your patriotic duty, Frederick. We are all counting on you. No pressure.