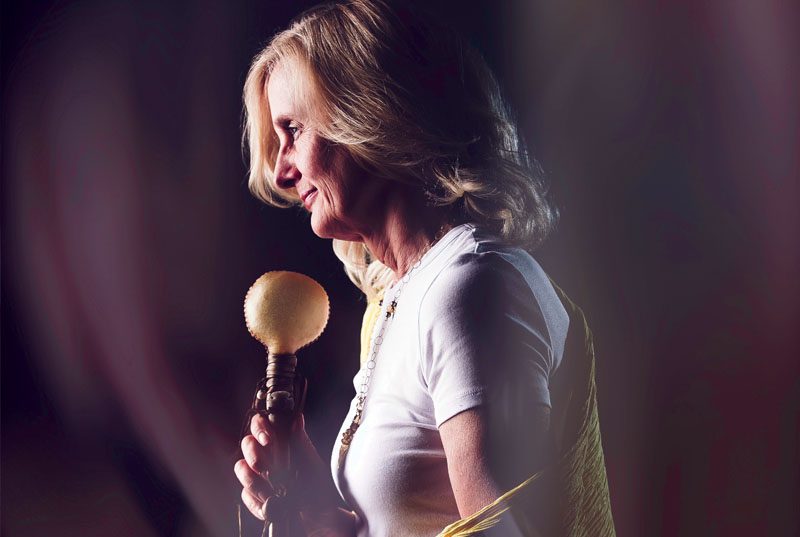 It’s all about connections. In personal relationships and business ventures, connecting with the right people at the right time can change the course of a life. Increasingly, people are acknowledging the mind, body and spirit connection, opening up to the benefits of modern and ancient practices to promote overall health and happiness. That’s where local entrepreneur Judy Bazis fills a growing need.

Bazis is a longtime member of Unity in Frederick, a spiritual community. It is there that she developed friendships working on committees and planning events. When she became the volunteer coordinator for SpiritFest, a small psychic fair in 2012, she found a great networking opportunity. She has since optimized that fair, developing her own Illuminate Festivals and taking them on the road.

“I was given the vision for Illuminate Festivals in 2014 and we held our first at the [Frederick] Fairgrounds in 2015,” says Bazis. Now they are held locally at the Clarion Inn and one is scheduled on Oct. 20. The festivals are becoming popular up and down the East Coast, from Maine to Florida and as far west as Chicago.

Bazis relied on her interest in holistic health, her openness to the metaphysical realm and her marketing and public relations background to grow a small fair into a full-time, family-run business. “I had my first reading with a medium to whom I was referred by a friend in 2011 and have received a lot of spiritual guidance from her. I have a dearly departed uncle who was a brilliant businessman, and he often comes through in my readings to offer guidance on how to grow Illuminate Festivals,” she says.

Vendors at the festivals offer services such as massage and reflexology, energy work and intuitive readings. Festivalgoers can also purchase all kinds of products including crystals, essential oils, jewelry and art. If this scene is not for you, Bazis understands. She knows her audience. “It’s not a hippy yard sale,” she says. “Whole Foods shoppers are our target.”

Approximately 90 exhibitors will be at this month’s event. They include Mona Thiel, a certified reflexologist, Reiki master teacher/practitioner and spiritual coach at Om Chakra Holistic Healing and Massage Center on East 2nd Street. Thiel says Reiki provides stress reduction, encourages relaxation and promotes healing. Practitioners place hands just above the body or lightly touching the body and say they become a conduit for life force energy. Thiel says she addresses the energy centers of the body, evaluating them and bringing them into balance. “Reiki relaxes our nervous system. It’s something that needs to be experienced. The healing is circular. It comes back healing one another,” she says.

Reflexology is a type of massage that involves applying pressure to different zones on the feet. Thiel says manipulating certain zones on the feet with varying amounts of pressure has a direct effect on different organs and regions of the body. She says reflexology can relieve headaches, muscle pain, and can bring relief for a multitude of chronic conditions.

Om Chakra’s massage rooms are oases in the middle of an office building in Downtown Frederick. The rooms are appointed with soothing images, fragrances and music. Thiel blends with the soft lighting and airiness of the rooms. She says she is delighted to work with founder and owner Ken Cook, a holistic and licensed massage therapist, to bring positive life-changing effects to clients. “We provide that place for people to seek the refuge of their own hearts. We look at it as a healing experience,” she says.

Another exhibitor, Anita Kuhn Carria, refers to herself as a light facilitator. She provides a variety of services including past life regression coaching and angel and fairy readings. She has been a part of Illuminate Frederick from its start in 2015.

She says, “People heal through energy. The universe pushes us in the right direction.” She explains that she takes people through past life regressions so that they can make connections and learn from them. “I teach people how to use their own light. You have to experience it to own it.”

According to Carria, such sessions can bring past issues, illnesses and misunderstandings to the surface where they can be addressed and resolved. “It’s amazing to see the profound healing,” she says. She recognized her “gift” at a young age and says she believes that energy moves through her for healing purposes.

She says she participates in the Illuminate Festivals so that people can feel comfortable trying out a new idea in a safe place and determine if they want to pursue further sessions. “Judy interviews her vendors. I appreciate that because I am particular about the venue. I was impressed with her energy and intention,” Carria says.

Cards on the Table

Mary Mannix speaks directly. She loves tarot. She loves the way the cards look and feel. She wants to share them with others.

Mannix is a historian, researcher and librarian by day. She manages the Maryland Room at the C. Burr Artz Public Library in Downtown Frederick. But her hobby is reading and teaching about tarot. “It’s entertainment,” she says, “but if it helps people to think through a project or a problem ….”

She was introduced to tarot at the Owl’s Nest, a Frederick store that featured books, artwork, gifts and instruction on metaphysical subjects. She bought her first deck of cards at Borders bookstore and ran a meetup group called Tarot and Tea at the Owl’s Nest. She eventually began teaching there. A few years ago, she told Bazis that she wanted to teach tarot in a workshop at Illuminate Frederick. Bazis thought it was a great idea and offered Mary a table to read cards, too.

If you happen to stop by her table at the upcoming Illuminate Frederick festival, you are likely to be entertained and to learn something. If you are up for a history lesson, Mannix delivers. She will tell you all about Pamela Coleman Smith, the illustrator of the popular Rider-Waite deck (also called the Rider-Waite-Smith deck) and the influence of the Golden Dawn, a secret society dedicated to the study of the occult, metaphysics and paranormal activity. She will tell you about the major arcana and minor arcana (big secrets and little secrets) and how the Death Card is really about transformation or an organic ending, not impending doom or physical death. As a reader she adheres to a code of ethics and privacy. “We don’t squeal,” she says.

Mannix knows her cards and her history. But what brought her to tarot in the first place? “The simple answer is, I was trying to understand a man,” she says with a smile. “I came to understand that love brought me to the cards. I learned a lot about myself.”

Bazis, meanwhile, is both a businesswoman and a believer. She sees a void in people’s lives and tries to fill it. She says the Illuminate Festivals are working for her and her clients. “People are open-minded. The uncertainty in the healthcare system in our country has helped people seek out new modalities.” She emphasizes that her hand-picked vendors are “gifted healers working with light and energy of spirit for the community.”

To find out more about the Illuminate Festivals, including the upcoming festival in Frederick, go to www.illuminatefestivals.com.