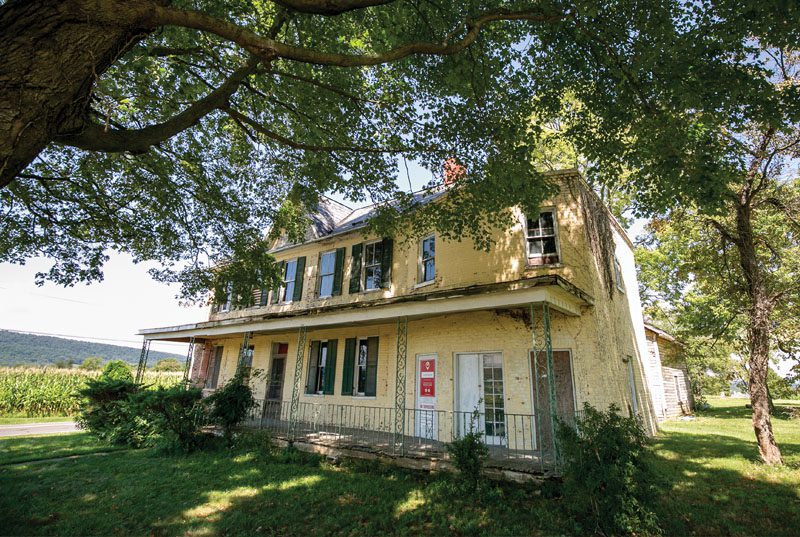 Nicholas Redding, executive director of Preservation Maryland, has a problem with what he calls “sad lists” of endangered sites. “It’s important to highlight things that are threatened,” says Redding, “but our focus has been to make preservation more proactive.” As a result, the nonprofit rebranded its annual endangered list as “Six-to-Fix,” a call to action that highlights preservation efforts and opportunities around the state.

Those efforts can have considerable impact. According to the National Trust for Historic Preservation, “the benefits of a historic rehab go far beyond one building,” they can “spur an increase in property values, draw new businesses, attract new residents, and enlarge the tax base.” And looking around Frederick County—from its beloved rural landscapes to the thriving Historic District at the heart of Downtown Frederick—those benefits are undeniable. Whether it’s a multimillion-dollar investment to transform Downtown Frederick’s historic Visitation Academy into a state-of-the-art boutique hotel or the heritage tourists who generate millions in tax revenue around the region, preservation plays a big part in the local economy.

However, for all Frederick’s success in preserving its past, there’s still plenty of work to be done. In the spirit of Preservation Maryland’s Six-to-Fix, here are some of the many current preservation opportunities Frederick County has to offer.

Owned by the Frederick County Landmarks Foundation, this large post-and-beam-framed house just northeast of Frederick on Liberty Road includes portions dating back to mid-18th century. But it will take more than historical significance to preserve. “People have to apply to become one of these [Preservation Maryland] projects and that develops community buy-in and it develops capacity in local preservation organizations,” says Redding. “Sometimes the barrier isn’t just the money, it’s the nuts and bolts of managing a nonprofit or finding a long-term use.”

The cost of restoring and maintaining these historic properties can be tremendous, both in terms of money and volunteers. “I don’t think people really understand the complexity. You’ve got to have a sustainable project,” says Tiffany Ahalt, administrator with Frederick County Landmarks. “Preservation Maryland has been very effective in bringing in some new people and fresh ideas into our conversation,” says Joe Lubozynski, a volunteer with Landmarks. “They’re basically coming in to help identify the most urgent critical needs to stabilize the property,” says Landmarks board member Matt Bonin.

The immediate work will be funded via a $16,000 grant from the Maryland Historic Trust but finding a long-term use for the property is the ultimate goal. “In the past we’ve opened it as an architectural museum, but that didn’t generate any income,” says Lubozynski. “The new idea is to have part of the home renovated to allow a curator to live on the property.” Modeled on a program from the Maryland Department of Natural Resources where curators are granted lifetime tenancy in exchange for restoring and maintaining the property, Landmarks is exploring the possibility of having a curator live in the newer, 1850s portions of the structure while maintaining the original Dutch-influenced 1748 portion as an architectural museum. “The long-term goal is the preservation of the property for generations to come,” says Lubozynski. “It’s significant in the history of the county and the settlement of Maryland.”

Dating to 1923 and named in memory of those who fought in World War I, Memorial Hall at 4 E. Main St. in Middletown has been a local landmark for generations. Built as a combination community center and auditorium, Memorial Hall was once the place in Middletown for movies, plays and community gatherings. It also housed the local library, the local American Legion post and a volunteer fire company. But now the long-vacant structure is on the market. “We’ve shown it to different folks, everything from people wanting to open a children’s museum to someone wanting to put in a brewery,” says Tony Checchia, owner/broker with Verita Commercial Real Estate.

Listed as a contributing structure in the Middletown Historic District on the National Register of Historic Places, Memorial Hall is eligible for state and federal historic preservation tax credits to offset rehab costs, as well as façade improvement grant funds from Main Street Middletown. On the exterior, the building’s distinctive buff-colored brick and fanciful terra cotta trim remain in excellent condition. Inside, most of the original woodwork, flooring and lighting fixtures are also intact, but the building would require considerable renovation to meet modern codes. “We’re still actively marketing the property and trying to find the right buyer,” says Checchia. “It’s a really neat property and it would be great to see it reused.”

On the afternoon of Sept. 14, 1862, Union Gen. William B. Franklin made his headquarters at this substantial brick house just east of Burkittsville that offered sweeping views of the Middletown Valley and South Mountain beyond—what one officer in his command declared “the loveliest landscape” he’d ever seen. But within an hour, that landscape would echo with cannon fire and the screams of the wounded and dying as Franklin’s VI Corps of the Army of the Potomac forced its way through the Confederate defenders of Crampton’s Gap, part of the larger Battle of South Mountain and prelude to the bloody Battle of Antietam.

Vacant for two decades and suffering from deferred maintenance and vandalism, the farmhouse and its historic outbuildings at the corner of Gapland and Catholic Church roads are at risk, but the Burkittsville Preservation Association, with help from Preservation Maryland, is working to save the site for years to come. Recent work includes patching the structure’s slate roof to prevent further water damage, repairs to the front porch and historic outbuildings by the Frederick-based National Park Service Historic Preservation Center, and planning for the site’s future as a critical component of the larger South Mountain Battlefield. “We actually got funding from the Park Service to do a land management plan,” says Preservation Maryland’s Nicholas Redding, “and we’re about to publish the field report that is the next step for South Mountain.”

Tucked behind East Patrick Street on Carroll Creek Way, this circa-1880 warehouse was purchased by the city during initial construction of the Carroll Creek flood control project and sat vacant and deteriorating for decades, a forgotten piece of history in the heart of Downtown Frederick. “It was in really bad shape and it was in real danger of collapse,” says Dean Fitzgerald of Fitzgerald Heavy Timber. Working with the city, Fitzgerald’s crews stabilized the structure: clearing away a mass of vines, repointing brick and repairing the roof. Inside, new floor framing has been installed and partition walls studded out, ready for drywall.

However, before the restoration can be completed, the building needs a tenant. A previous proposal for a distillery fell through, but the proposal was still a win for historic preservation, leading to the code revisions that kicked off Downtown’s recent boom in breweries and distilleries. “I brokered those changes,” says Fitzgerald. “It wasn’t just to put a distillery in my little building.”

“There was a general sense that we’re losing Brunswick,” says Preservation Maryland’s Redding, referencing a now-stalled redevelopment proposal that threatened several of downtown’s historic structures with demolition and, as well, the old railroad town’s efforts with retail vacancy. “We’re really interested in not having vacant spaces, filling the storefronts and changing the economic situation,” says Brunswick City Councilman Nathan Brown. And using historic preservation to further that revitalization emerged as one of the primary goals of the city’s Downtown Small Area Plan, adopted in May of 2019. “That plan revealed that it is very important to the public—and economic development—to preserve your historic charm,” says Brown.

To preserve that charm, the city has formed a Preservation and Revitalization Committee and is exploring the possibility of establishing a conservation district in downtown Brunswick. A conservation district—what Redding refers to as “preservation light”—would come with some restrictions but allow greater flexibility for renovation than a full-fledged historic district. Brown says the committee is currently in “information gathering mode,” but his hope is to “put in a process for preservation, but not be a hindrance to investment. We’re trying to find a happy medium.”

The effort to preserve the remains of this 1740s farmhouse in the Wormans Mill Community started with one phone call. “I remember distinctly, this woman called me up and said, ‘There are these ruins in my backyard,’” says Christina Martinkosky, a historic preservation planner with the City of Frederick. “No one had heard of this thing,” says Wormans Mill resident Dedra Saltirik, who made the call. “Historically, there is documentation,” she adds, “but it was off the radar.” Her husband, John Saltirik, says, “They came out and saw it and their jaws just dropped.”

“I could tell right away that it was an early German structure, so I knew it was special,” says Martinkosky. “In some ways it’s more German than Schifferstadt [Architectural Museum].” The stone walls and corner chimney that stand today are all that remain of what was originally a much larger house, one that once featured a massive central fireplace and a wattle and daub second story built sometime in the 1740s by early settler Jacob Bruner.

“We don’t know exactly when,” says Martinkosky, “there’s just a lack of documentation, so you just have to work with the clues that you have and make reasonable deductions.” No matter the exact date, it’s a significant piece of Frederick’s early colonial history and Wormald Homes is in the process of deeding the site to the City of Frederick to ensure its future preservation. “We have to figure out funding sources and ideas about stabilization work. We have started talking to stonemasons and a structural engineer,” says Martinkosky.

“We’d like to get the walls tied together and stabilized and have some interpretive panels or some more high-tech options to tell the story,” says John Saltirik. “There’s a constant stream of people going by asking, ‘What is this thing?’” Dedra Saltirik says, “To watch people come in and actually touch the stone, you can see the reverence they have for it.”