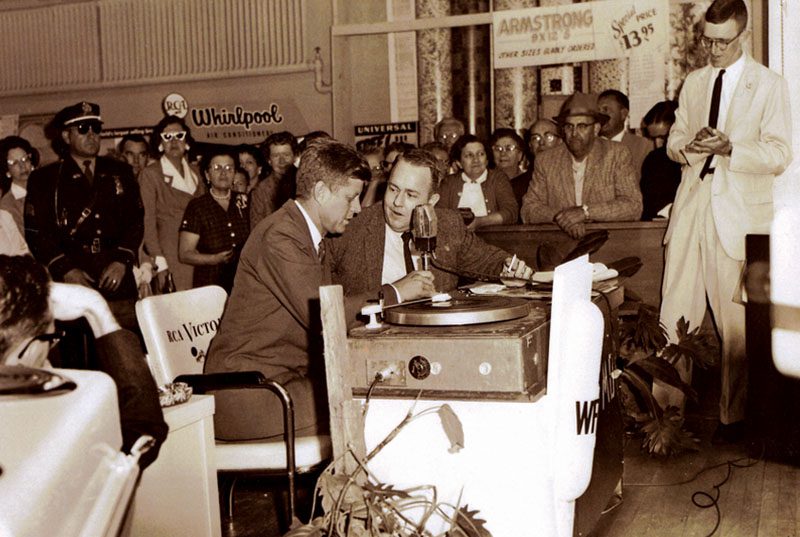 Presidents, Future Presidents and Former Presidents have their own Frederick Stories

Poor William Henry Harrison. The nation’s ninth president is best known as being the nation’s briefest president, having served just 31 days before dying in office. Since then, Harrison has been the source of trivia questions and nerdy history jokes, and he was even mocked in an episode of The Simpsons.

On Feb. 5, 1841, President-elect Harrison was greeted in Frederick by a crowd of locals at Dorsey’s City Hotel. After dinner, he gave a brief speech to the throng from the hotel doorway. The 68-year-old Whig then walked to the railroad depot a couple blocks away to catch a 10 p.m. train for Baltimore. He was sworn into office a month later, on March 4, and died on April 4.

Legend has it that Harrison caught a cold bug in Frederick on that bitter, wet night in February that ultimately claimed his life, but that is unlikely. The actual cause of his death has been debated, but many historians believe it was either pneumonia or typhoid.

Throughout the years, Frederick County has been a favorite stop for many presidents, future presidents and even former presidents—most with more successful outcomes than Harrison—whether for official business, to play a round of golf or take in a baseball game. Presidents have campaigned here, shopped here and some have even gone fishing here.

Proximity to the nation’s capital doesn’t hurt the chances of a visit from the commander-in-chief, and there’s also the not-so-small fact that the presidential retreat of Camp David is near Thurmont. In fact, it’s a reasonable argument to say that every president has spent some time in Frederick County, even if only to make use of the roads and highways on their way somewhere else.

Here are just some of their stories.

George Washington, long before he was president, visited “Frederick Town” in 1755 when he was lieutenant colonel in the Virginia Militia. But it wasn’t until 1791 that he visited as president of the United States, stopping here during a June journey from his Mount Vernon home to Philadelphia.

“The road by which I passed is rather hilly, but the lands are good and well timbered from Monocacy to Frederick Town. For miles they are rich and very fine. The country is thicker settled and the farm houses of a better kind than I expected to find,” he wrote in a diary.

According to a paper written by Judge Edward S. Delaplaine, Washington concluded the 15-hour first leg of his trip by visiting Brother’s Tavern and then spent the night at Richfield, home of Maryland Gov. Thomas Johnson, about four miles north of Frederick.

During his brief visit, Washington addressed local residents, thanking them for the warm welcome they had always given him: “When in the darkest hours of the Revolution, of doubt and gloom, the succor and support I received from the people of Frederick County always cheered me.”

Washington continued his journey by 7 a.m. and left Frederick by way of Woodsboro Road, stopping in Cookerly’s Tavern in present day New Midway and then in Taneytown.

Because the railroad was the preferred means of swift travel in the 19th century, it made sense that many presidents of that era would, at some point, find themselves passing through Frederick. For President Abraham Lincoln, that happened on Oct. 4, 1862, just a few weeks after the bloody Battle of Antietam. Lincoln had been visiting the battlefield to confer with Union Gen. George B. McClellan and was returning home.

His party traveled across South Mountain by Army ambulance and upon reaching Frederick the president stopped at a home on Record Street to visit the convalescing Gen. George Hartsuff, who had been severely wounded in the hip at Antietam. (Hartsuff would recover and later return to active duty.)

Lincoln later made his way to the B&O train station, today the Frederick Community Action Agency, where he would board a train that would take him home to Washington, but only after making brief remarks to a large crowd: “Fellow citizens: I see myself surrounded by soldiers and by the citizens of this good city of Frederick, all anxious to hear something from me. Nevertheless, I can only say—as I did elsewhere five minutes ago—that it is not proper for me to make speeches in my present position. I return thanks to our gallant soldiers for the good service they have rendered, the energies they have shown, the hardships they have endured, and the blood they have so nobly shed for this dear Union of ours. And I also return thanks, not only to the soldiers, but to the good citizens of Frederick, and to all the good men, women, and children throughout the land for their devotion to our glorious cause.”

On May 17, 1943, President Franklin D. Roosevelt was driven into Frederick with a special guest, British Prime Minister Winston Churchill. The two wartime leaders were returning to Washington, D.C., from the presidential retreat near Thurmont (then known as Shangri-La), but Churchill had a keen interest in stopping in the city.

He wanted to see the Barbara Fritchie House, where, according to legend, the namesake resident defied Confederate troops by waiving an American flag in their midst as they marched through the city during the Civil War. The story is big on drama—immortalized in a famous poem by John Greenleaf Whittier—but small on facts. Many historians have since debunked various parts of the story, even suggesting it was another woman who challenged the rebels.

Nonetheless, Churchill, a historian himself who had visited the battlefields at Gettysburg, Pa., years before, wanted to see the home of the “heroic dame,” as he called Fritchie in his memoirs. Also in the car was Harry Hopkins, one of FDR’s closest advisers on foreign policy, and the discussion moved him to quote the most famous line from Whittier’s poem: “‘Shoot, if you must, this old gray head. But spare your country’s flag,’ she said.”

Churchill eagerly proceeded to quote nearly the entire poem. “I got full remarks for this from my highly select American audience, none of whom corrected my many misquotations …,” Churchill wrote.

Give Him Hell … and a Coke

On June 21, 1953, former President Harry S. Truman drove into Frederick as part of a road trip back East he was taking with his wife, Bess, that started at the couple’s Missouri home. A former chief executive driving himself across the country, without Secret Service protection, is an anachronism today, but the Trumans truly were typical tourists—eating at restaurants, staying at hotels and visiting friends along the way.

When Truman pulled his Chrysler New Yorker sedan into Carroll Kehne’s Gulf Station at 400 W. Patrick St. (at the intersection with Jefferson Street), he and Bess were greeted by newspaper reporters and photographers alerted to his travels. Truman was there about 30 minutes, chatting with Kehne, the reporters and others, while his car was gassed up and he cooled off with a Coke. Kehne refused to let Truman pay. “I just wanted to be able to say that I treated President Harry S. Truman to a tank of gasoline,” he said. But Kehne did have one request of the former Democratic president: give some grief to his Republican mechanic. Truman demurred. “It’s too hot to give anybody hell,” Truman said.

The Coca-Cola bottle from Truman’s visit is on display at Heritage Frederick’s Museum of Frederick County History.

On May 13, 1960, then-Sen. John F. Kennedy’s presidential campaign reached Frederick, with stops at the Frederick County Courthouse (now Frederick City Hall) and American Optical’s plant near Frederick Municipal Airport. Kennedy’s motorcade drove up East Patrick Street, generating momentum for the Maryland primary election that was then just days away. A handful of people attended his WFMD radio address that was broadcast from Routzahn & Sons at 26 E. Patrick St.

When the photograph was developed, it was discovered that Frederick’s Jack Kennedy had his left jacket lapel turned up, a wardrobe malfunction that apparently took place when he removed the camera strap from around his neck to hand to Ashbury. The photographer, who died in 1999, rarely missed an opportunity over the years to rib the novice photographer for failing to notice the out-of-place lapel before clicking the shutter. Ashbury said, “I always told him that I didn’t say anything about [the lapel] being turned up because people looking at the picture needed something to tell the two Jack Kennedys apart.”

On Oct. 19, 1971, President Richard M. Nixon visited Fort Detrick and made an announcement that would dramatically change the focus and mission of a large part of the base by creating the Cancer Research Facility of the National Cancer Institute.

Fort Detrick’s history had taken several turns since its initial use as a Maryland National Guard airfield in 1931, then known as Detrick Field. Over the years it grew in both size and function, serving as the U.S. Army’s center for biological warfare research and development. But international pressure against germ warfare was building in the 1960s and on Nov. 11, 1969, Nixon marked Veterans Day by requesting Senate ratification of the 1925 Geneva Protocol that prohibited use of chemical and biological weapons.

Two weeks later, the future of Fort Detrick became uncertain when Nixon outlawed offensive biological research in the United States. Research at Fort Detrick then became focused solely on defensive measures, but many feared the change would lead to a large loss of jobs at the base.

But his 1971 visit, coinciding with his “declaration of war” on cancer, led to what is today the National Cancer Institute at Frederick and Frederick National Laboratory for Cancer Research, an internationally recognized center for cancer and AIDS research.

Baseball was always a big part of the Bush political dynasty, going back to when George H.W. Bush captained the Yale University team and played in the first two College World Series in the 1940s. George W. Bush enjoyed the game so much that he was once part-owner of the American League’s Texas Rangers.

Both future presidents visited Frederick several times during their respective presidencies. The elder Bush once shopped at Frederick Towne Mall with First Lady Barbara Bush (he bought socks), and the younger Bush visited a Frederick lawn equipment manufacturer to make his case for tax cut legislation.

But on June 8, 1991, it was all about baseball when George H.W. Bush visited Harry Grove Stadium to watch the Frederick Keys of the Class A Carolina League take on the Durham Bulls. Prior to the game, a team of Secret Service agents confronted a scout for the Baltimore Orioles, who was outfitted with a radar gun (used for the recording the velocity of pitches). The agents were unsure of the purpose of the “gun.”

On Aug. 8, 1992, Bush would attend another Keys game, this time with First Lady Barbara Bush and several of their grandchildren. He is still the only commander-in-chief to attend a Keys game.

Editorial note: This article intentionally excludes visits specific to Camp David because every president since Franklin D. Roosevelt has been to the presidential retreat and it could be its own story; in fact, there are many stories and even books written about Camp David. -GF