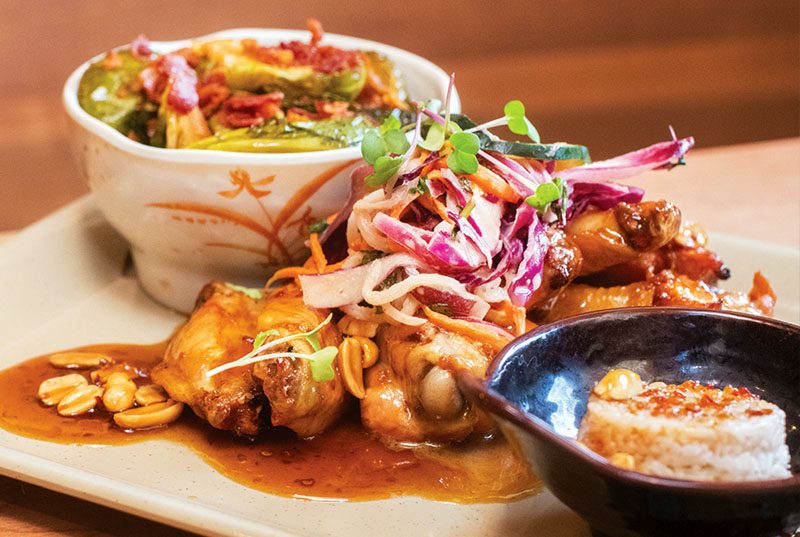 Man does not live by bread alone. There’s a good chance chicken is also on the table. Industry insiders estimate there are about 23 billion chickens worldwide at any given time, compared to 7.7 billion people. But until 1964, wings were the least desirable part of the bird, left for those who came late to dinner or tossed into a stock pot. The chicken wing craze origin story credits Teressa Bellissimo and the Anchor Bar Restaurant in Buffalo, N.Y., with introducing the masses to this minuscule morsel’s flavor-bomb potential.

Challenged with cobbling together a late-night snack for her son and his friends, Bellissimo deep fried some wings and tossed them in a spicy sauce. They were a hit, earning a spot on the menu. Fans caught on, prompting other restaurants to offer their own version of “Buffalo wings.” Soon the term “Buffalo” applied to any food doused with peppery, lip-tingling sauce.

Consumption—and prices—peak during big games, but the wing’s continuing cult status makes it a feature on everyday menus across the country. Until last year, growing demand frequently outpaced availability, opening doors for competing options, such as “boneless” wings and even pork ribs, but the original maintains its place of honor.

In the spirit of camaraderie and celebration associated with splitting an order of chicken wings, we secretly sampled wings at a few of Frederick’s hot spots (but not nearly all of them!), taking notes on taste, portion size, value and flavor variety. It was an arduous task, replete with sauce-dribbled clothing and over-stuffed tummies, that confirmed wing-lovers have plenty of appetizing options around town. One word of advice, made-to-order wings can take 15 to 20 minutes to cook, so hungry patrons should consider ordering ahead.

Home of the original Buffalo wing, Anchor Bar now has 15 locations spread from Texas to Toronto. The Frederick place opened last February near Francis Scott Key Mall with a full complement of burgers, apps, entrees and pizza, in addition to 16 wing varieties. Prices are the same for regular or boneless and they can be char-grilled for a small upcharge.

We ordered two sets, sweet chili and honey barbecue (one flavor per order). Both were served steaming hot with a classic complement of celery and creamy ranch or blue cheese. The honey barbecue was respectably sweet and tangy, but sweet chili stole the show. The sticky, candied glaze and smoldering heat lingered in the mouth as tasters reveled in the knobby, bacon-like bits of browned skin that gave way to a juicy interior.

Wings here are fresh, never frozen. There’s even a spicy hot chicken wing soup among the menu’s creative “Buffalo” options. It’s no wonder fans will drive hours just to get a taste of the wings that started it all.

Chicken wings and beer are an enduring match, and Barley & Hops has both in spades. Wings are sold in one-, two- or three-pound portions, which can be divvied among several flavors. Traditional Buffalo or B&H’s IPA Barbecue are most popular. We tried four types and tasters’ preferences depended on their heat tolerance. Spice lovers were smitten with the complex mingling of the Sriracha Honey Lime, while non-chili heads dabbed up every drop of the IPA Barbecue.

The Mac & Beer Cheese side was a winner, too. We called it a day when one taster shamelessly drained his bowl of soupy, cheesy goodness like it was a glass of iced tea. If you want wings to go, you can also fill a take-home crowler can with any of the award-winning brews on tap. Crowlers start at $10, with a discount on three or more.

This craft beer dispensary and restaurant is known for its chef’s innovative, upscale take on popular eats in a cozy, laid-back environment, complete with 20 changing taps. Wings here are oven roasted instead of deep-fried, resulting in a tender finish. They come in hot, mild, barbecue, Old Bay, medium, Creole, or jerk, served with ranch or blue cheese and baby carrots.

The “Somewhat Spicy General Tso’s Wings” didn’t really ping on the heat index, but the ample portion was meal-worthy and visually appealing. We got nine wings bathed in a thin brown sauce, redolent of soy and ginger, topped with a colorful Vietnamese-style slaw of vinegary cucumber, cabbage, carrot and onion. The order included sticky rice and a garnish of crunchy peanuts. Alone, the dish makes a hefty lunch or modest dinner, leaving room to indulge in the Roasthouse’s bread pudding of the day for dessert.

Family-owned Il Forno is a split between casual dining and comfortable bar with a small outdoor patio in the Westridge Shopping Center. The pizza, baked chewy and gooey in a wood-burning oven, racks up annual accolades in the Best of Frederick standings, but the wings get a whole lot of love, too. They are 99 cents each on Wing Wednesdays, along with $4 ciders and Heineken beers. Diners get a choice: Buffalo, BBQ, Old Bay, Garlic Parmesan, Cajun, Teriyaki, Mango Habanero, Caribbean Jerk, Bourbon Kick, Sweet Red Chili or naked.

We can vouch for the Bourbon Kick barbecue. It’s an even mix of flats and drumettes, cooked to order, then tossed with a mahogany gloss of well-spiced sauce. Tasters thought the flavor balance and meat-to-sauce ratio was just right.

Frederick’s Wing Stop franchise, also in Westridge Shopping Center, is part of an international chain that knows how to tempt the taste buds. Their substantial list of flavors makes it hard to choose, but even the smallest portion—a six-piece combo with side and drink—gets two flavors. The online portal helps gauge how much to order based on how many in your party.

Wingstop’s two new flavors are Ancho Honey and a fiery Harissa Lemon Pepper. We opted for the iconic Lemon Pepper and Garlic Parmesan, adding a side of fresh-cut fries and Cajun fried corn. The wings were hearty and loaded with seasoning. Flavors were, in turn, notably citrus-forward with the familiar sultriness of black pepper or thickly covered with pungent granules of Parmesan and just enough garlic to ward off vampires.

Mackies is a burgeoning Maryland chain founded in Gaithersburg in 2005, with commendations from Zagat and TripAdvisor. It’s known for generous portions of smoke-kissed meats, including its signature Texas Heart Attack sandwich. That’s a pound of pulled pork, pork sausage, sautéed peppers and onions, cheddar cheese and a heap of fries.

Wings might not be the first thing to leap off the menu with so many other meaty temptations, but the minimum order is the perfect snack size and competitively priced. We ordered them naked with a side of traditional hot sauce and were impressed with the pervasive smokiness and crisped, lightly charred exterior. Even sans sauce, the meat was juicy and satisfying, with the slightest pink hue, a hallmark of their cooking method.

Wings are offered by the pound on White Rabbit Gastropub’s small plates menu after 3:30 p.m. This well-appointed hideaway is one of Frederick’s notable foodie havens with an emphasis on locally sourced ingredients and thoughtful preparation, including plenty of veg-friendly options. The last three pages of the menu are dedicated to the pub’s 40 rotating taps of beer, cider and wine.

Here, tasters split a plate with Spicy Korean BBQ and Roasted Garlic, admiring the ribbons of celery as garnish. The saucy barbecue was aromatic, with hints of sweet soy and chili, that comfortably satisfied tasters with a lower spice tolerance. The dry-rubbed counterpart offered an exceedingly salty kick with a hint of garlic flavor.

It’s easy to roll past this nondescript establishment, especially if you’re rubbernecking into Olde Mother Brewing’s windows across the street. A self-described “dive bar,” Guido’s is just that. It’s small and dark with low ceilings, swathed in black and red with duct tape accents, but its friendly staff and classic metal backbeat make for an appealing neighborhood hangout. It is strictly over 21 after 9 p.m.

What Guido’s lacks in frills it makes up for with a tight, well-executed menu of no-nonsense favorites, movie and trivia nights, live bands, and kicking specials. The in-the-know crowd (and we do mean crowd) lines up for Wing Wednesdays to feast on 35-cent wings. We tried the mild, creamy Boom Boom version and the surprisingly savory Teriyaki, perfectly paired with a cold Pabst and the reverberating sounds of Five Finger Death Punch.

Brunswick’s Wing’n Pizza Shack offers a whopping 25 flavor combinations, including four different BBQ sauces, Honey Mustard, Cajun, Blistering Garlic and pepper sauces from mild to “911.” We ordered online for easy pickup and were rewarded with meaty, generously-sized wings served piping hot and perfectly cooked. Both the Parmesan Herb and Butter Garlic (one flavor per order only) were zesty, served swimming in a pool of buttery flavored liquid, which some tasters found luxurious and others merely tolerated.

In one version, tender bits of golden garlic cling to crispy skin. In the other, butter-drenched Parmesan with flecks of fragrant rosemary and oregano hit the high notes. Pro tip: The dregs of either sauce make a luscious dip for pizza crusts.

Sports bars are prime territory for chicken wings, and the Glory Days Grill chain is no exception. This place garnered top honors in Frederick Magazine’s most recent Best of Frederick vote.

Under the competing flicker of screens showcasing seasonal sports highlights and family-friendly cartoons, patrons can load up on bone-in, boneless or grilled wings. There is even a cauliflower substitute. The restaurant’s Wing Alarm Meter (W.A.M.) arcs from tranquil Teriyaki to sinus-clearing “Hot.”

Glory Days’ Honey Old Bay wings came highly recommended, posing an interesting counterplay between syrupy and savory, with essences of celery salt, cayenne, nutmeg and paprika. Tasters either loved or loathed the combination. Straight Old Bay was an acceptable compromise, with the “Glory” grilling/barbecue sauce variety a perennially popular selection. The menu also includes calorie counts, but all bets are off when it comes to scarfing down wings.

Founded in 1982 by two Buffalo natives who were missing their hometown specialty, Buffalo Wild Wings grew into a well-known chain with a big variety of sauce and seasoning options—23 and counting. They take runner-up in our Best of Frederick wing category.

The extensive list includes a few flavors we didn’t find anywhere else, including Salt & Vinegar, Jammin’ Jalapeno, and Thai Curry. Better yet, traditional wings are buy-one/get-one free on Tuesdays. Boneless wings are specially priced on Thursdays, and there’s always a happy hour on the horizon. Their rewards program lets diners rack up points toward free food with every purchase. Fans can even pick up a bottle of their signature sauces to enjoy at home.