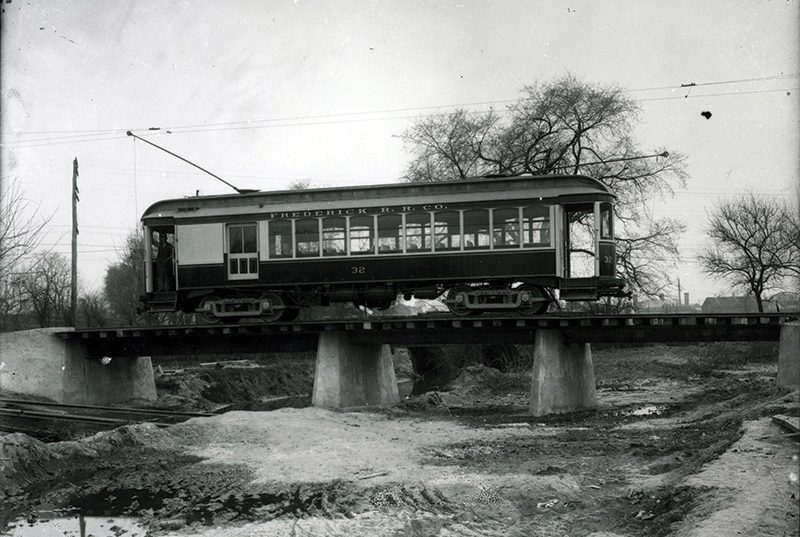 Frederick Railroad Company Car #32 was just one member of the fleet that used to traverse Downtown Frederick on rails still visible beneath the pavement. The line ran throughout the city, connecting to the Baltimore and Ohio Railroad terminus, and continued to the Pennsylvania state line through Frederick and Carroll counties with stops such as Woodsboro, New Midway, Ladiesburg, York Road, Bruceville, Taneytown and Schue’s Station. It’s not certain at which bridge along the route this photo was taken, but it is likely Tuscarora Creek, Big Pipe Creek, Little Pipe Creek or Piney Creek.

Rail line construction started on July 29, 1869, after a party near Woodsboro, where the company barbecued an entire ox for its new employees and their families. After several construction and supply delays, the line opened for customers on Sept. 29, 1872, with a round-trip fare of $1.35, approximately $20 today, but the line did not yet run into Downtown Frederick. By 1876, company executives decided they would attract more riders by running the line into Downtown and connecting to the B&O Railroad terminus and began buying property along East Street between Church and 2nd streets for rail and a depot. The next big expansion was in 1895, when the railroad won a contract to carry the mail from Frederick to Pennsylvania at 9 a.m. every day.

By 1948, the expansion of paved roads and increased sales of cars meant the railroad closed to passengers, but it was used to carry cement and other goods from regional factories to larger train lines until 1982, when it was purchased by the Maryland Department of Transportation. Today, a portion of the line is run by the Walkersville Southern Railroad, which operates excursion and dinner trains with historic engines and cars.