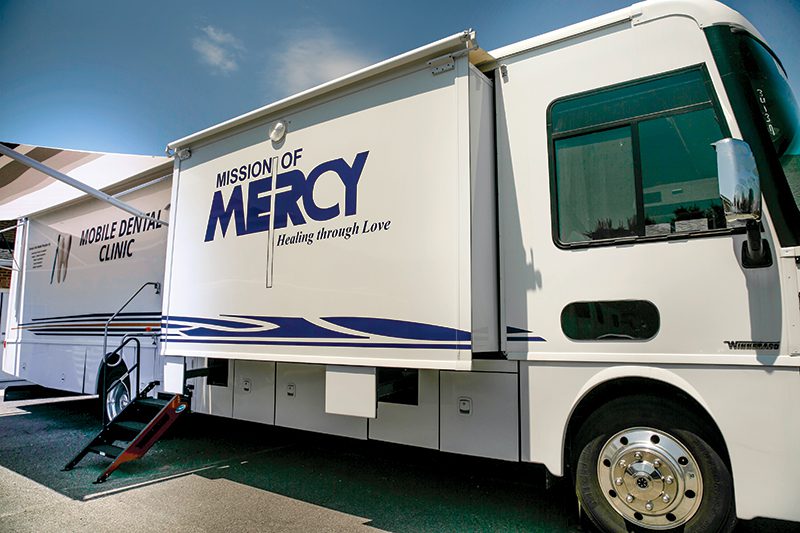 They gather in silence, lining up before the sun rises. Some are in acute pain. Many suffer from chronic diseases like diabetes or hypertension. They range in age from young adults to senior citizens. But they all have one thing in common: they are either uninsured or cannot afford their insurance co-payments. And they simply want to feel better.

For 25 years, Mission of Mercy has been bringing them hope and healing.

What began in 1994 with one used RV, a few volunteers and a handful of patients, has grown to become a multi-state organization that in Maryland and Pennsylvania alone has served more than 45,000 patients, offering free medical and dental care, as well as free prescription medications. Or, in the words of its mission statement: “Restoring dignity by providing healing through love.”

If it takes a village to raise a child, it takes a small army of vol-unteers (more than 200, in fact) to make Mission of Mercy’s clinics run smoothly and efficiently. “On any clinic day, we may have 35 to 40 volunteers and maybe only five of them have [medical] initials after their name,” says Medical Director Dr. Michael Sullivan. His wife, Dr. Gianna Talone-Sullivan, founded the organization.

Volunteers drive the 40-foot RVs that have been converted into mobile clinics to the Frederick Church of Jesus Christ of Latter-day Saints or Faith Baptist Church in Knoxville, which host the free medical and dental clinics one (or more) days a month. Registration volunteers organize patient files. Volunteer nurses triage patients, record vitals and medical histories. Diabetic educators help patients manage their disease. Translators allow patients to communicate with their caregivers.

It’s a far cry from a torrentially rainy day in August 25 years ago when the Sullivans, assisted by a small circle of friends and family members, including Michael Sullivan’s sister Maureen Liddle, a registered nurse, began their Mission of Mercy. “We were naïve but ready to go,” Liddle recalls.

The Sullivans’ original mission was to serve the poorest of the poor, many of whom they assumed would be homeless. But because the homeless qualify for government aid, they quickly realized that the majority of their patients were the working poor—those who might have several jobs but still cannot afford their insurance premiums or co-payments.

“We serve people who fall between the cracks of our health care system,” says Linda Ryan, Mission of Mercy’s executive director. Many of the organization’s patients have chronic illnesses and need help with medications and disease management. Ryan says it is also seeing more and more Medicare-eligible patients who cannot find primary care physicians who accept Medicare.

Over the years, Mission of Mercy has also seen a drastic increase in the need for dental services, which was part of what spurred its $1 million campaign to purchase and equip a new three-chair, state-of-the-art mobile dental unit that has enabled the organization to double the number of patients it serves.

“We have had a dental crisis since the first day we started because the government provides no coverage for dental care,” Ryan says. “Yet, ask anyone with a toothache how it impacts their ability to work and care for their family. It can be debilitating.”

Since 1994, Mission of Mercy has treated nearly 12,000 dental patients, performing extractions and basic fillings. The demand has been so great that the organization now has a full-time dental director, Dr. Roz Kellum, who is at every clinic site and supported by volunteer dentists.

By providing both medical and dental care, Mission of Mercy offers comprehensive, integrated care that includes referrals, prescription coordination and a common medical records system between the two practice areas. Research has shown this to be critical, since oral health can have huge implications on a patient’s overall health.

Frederick Regional Health System and Frederick Memorial Hospital provide lab work and imaging (X-rays, etc.) for Mission of Mercy’s patients, a generosity the organization’s medical professionals are careful not to abuse. “We only order tests for what we absolutely need to know,” Sullivan says.

The increasing cost of prescriptions, even generics, is also a challenge for the organization. Yet medications are often necessary to manage chronic conditions. “We are careful about what we prescribe, however, because the last thing we want to do is send someone home with a medication that they may not be able to afford if something happened to us,” Sullivan adds.

By providing preventative and interventional care, Mission of Mercy enables many of its patients to keep working so they can support their families. Liddle, who is now the organization’s nursing director, says treatments such as steroid injections are critical for those who cannot afford joint replacements. “These injections allow them to keep functioning,” she says, adding that the organization would like to also offer physical therapy, but that has been an area in which it has had difficulty finding volunteers.

By seeing patients regularly and providing a medical home for the chronically ill, Mission of Mercy is preventing costly emergency room visits and freeing up hospital personnel to care for the acutely ill. “And our partner hospitals are grateful to have a place to refer people to after discharge for their follow-up care,” Sullivan points out.

Ryan says the churches that host their clinics are as essential to their mission as the doctors and nurses. “They take it on as part of their ministries,” she says. In addition to allowing

Mission of Mercy to use their buildings for the registration and triage areas, they also provide food for the volunteers and patients. Sometimes it is bagged lunches, other times it is a hot buffet. “It is just ano-ther way of demonstrating that on our clinic days, everyone is a clinician because everyone is capable of sharing a smile or a hug to restore dignity through healing and love,” she says.

Mission of Mercy’s corps of leaders and volunteers would like to expand their services to serve more of those in need, but they acknowledge they need to expand their sources of funding as well as their volunteer base to make that happen.

Last year, Mission of Mercy received nearly $2 million in in-kind donations of professional services, medications and other donated goods. That was more than twice its cash expenses of roughly $1 million. “Research shows that mobile clinic programs like ours provide a $12-to-$1 return on investment to the community,” says Jennifer White, Mission of Mercy’s director of development. That means a gift of $10,000 to Mission of Mercy brings a community benefit of at least $120,000.

While the nation’s politicians continue to debate the issue of universal health insurance, Mission of Mercy continues to solicit financial and volunteer support for its work because the need isn’t going away. It continues to see the sick and suffering who come to its clinics—while never asking for any kind of documentation of eligibility. “It’s pretty hard to restore a person’s dignity if the first thing you ask them to do is prove poverty,” Sullivan says.

In addition to ensuring it has enough funding to carry on their Mission of Mercy, the organization’s current volunteers and staff realize that they need to think about succession planning, too. “I think there will always be a need for what we do,” says Liddle. “This is God’s work and I hope that there are leaders out there who will carry it on.”