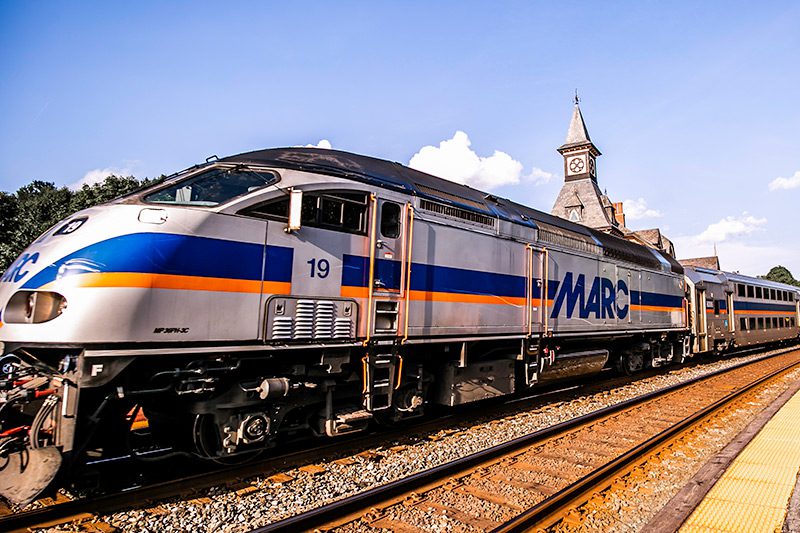 It’s 7 p.m. on a Thursday and MARC Train 881 is making its way from Washington, D.C.’s Union Station to stops at Point of Rocks and Brunswick in Frederick County. As it rolls north and west, it crosses over I-270 near Gaithersburg, where the river of taillights on the roadway below says rush hour is far from over. Yet, inside the 881’s Quiet Car, riders are plugged in or tuned out. They are reading, sleeping or merely dazing. But most importantly, they are moving—unlike the motorists on I-270. Moving trains are always a good thing, and not to be taken for granted.

For the hundreds of commuters who ride the MARC train from Frederick County to Washington, D.C., the pain of limited trains or service delays is a price they are willing to pay if it saves them from the misery of driving in stop-and-go traffic on I-270 and the Capital Beltway.

If based purely on travel time, riding MARC’s Brunswick Line to D.C. may not save the average commuter any time versus driving in rush hour. But for Martha Boenau, who works for the American Psychological Association just steps from Union Station, the trip is more about the quality of the time spent commuting.

She takes the Monocacy Branch of the Brunswick Line, which stops in Downtown Frederick and behind the Target store on Md. 355. Her daily trip averages about two hours, but she uses the time to read, browse the internet or listen to music. “MARC definitely has its idiosyncrasies, but it’s still overall so much better than driving,” she says. “Especially if it is raining or snowing.”

Regular riders like Boenau have become accustomed to heat-related speed restrictions, downed trees on the tracks or delays due to freight traffic on the CSX tracks that MARC’s Brunswick Line trains use. The Washington Post recently reported that Brunswick line trains were on schedule only 73 percent of the time during the month of July; between 77 to 87 of those delays were attributed to CSX operations on the tracks.

But given the alternative, most riders seem to take the delays in stride. “For all its problems, MARC is still the better bet,” says Karl Berger. For the better part of 20 years, he’s been taking MARC’s Brunswick Line train from Point of Rocks to D.C., where he works for the Metropolitan Washington Council of Governments. “During rush hour, it provides a more reliable trip home and is still infinitely preferable to driving.”

Reliable, but not necessarily frequent. Unlike MARC’s Baltimore-centered Penn Line, Brunswick Line trains do not run mid-day. That means commuters who take the train to Frederick County in the afternoon cannot leave D.C. before 3:30 p.m. (1:30 p.m. on Fridays). There is no weekend service on the Brunswick Line at all.

And riders who choose to take the Brunswick Line’s Monocacy Branch trains are limited to three trains in the morning and again in the afternoon. Trains to and from Point of Rocks and Brunswick are slightly more frequent, however. That’s why Berger, who lives in Frederick, drives about 15 miles to the Point of Rocks station to catch his train.

He and other veteran riders can be creative in finding ways to work around MARC’s service limitations to Frederick County. Roger Seitzinger has been riding for the past 14 years to D.C., where he works for Amtrak. Seitzinger lives in Urbana and chooses to drive south and board the train in Germantown. Although the Monocacy station is only five miles from his home, taking the train from there would actually add time to his daily commute.

Seitzinger is willing to make the 14 mile-drive to Germantown, but he has absolutely no desire to drive all the way to work. “D.C. is not an accessible city,” he says. “Parking is horrible—and expensive. Plus driving I-270 is pretty stressful. You can relax on the train.”

For many riders, the monetary savings of riding MARC helps ease some of its scheduling challenges. The average daily fee for parking in D.C. can range from $10 to $30. Add to that fuel and wear-and-tear expenses associated with the 100-mile round-trip drive inside the Capital Beltway and suddenly MARC’s $216 monthly pass from Frederick or Point of Rocks becomes a bargain.

Many D.C. employers offer commuter incentive programs that help sweeten the pot even more. Boenau uses a flexible spending account that allows her to use pre-tax dollars to fund her commute, while Berger receives a commuting stipend from his employer.

But for some regular riders, the benefits of riding the train are not merely limited to dollars. The train becomes a community unto itself, where friendships are forged and memories made. Boenau and her partner regularly rode the Point of Rocks train before he retired from his D.C. job several years ago. They made great friends during those rides. “We had so much fun on that train. There was so much laughter. It made the trip fast and fun,” she recalls.

Boenau’s “crew” would take turns bringing the Friday afternoon “Happy Backpack” filled with drinks to celebrate the end of the work week. “We made so many good friends that became more than just train friends,” she says, noting that their get-togethers eventually expanded to include non-train gatherings.

Berger, too, has a group of friends he has come to know from his years on the train. “We originally started talking because our kids played on the same club soccer team, but now we all know where we sit on the afternoon train so we can shoot the breeze,” he says.

But in the morning, Berger finds silence is golden. He always rides the Quiet Car on his trip into D.C. Posted signs indicate that in that car, conversations must be muted, cell phones silenced, and earphones are required if viewing digital content on phones, tablets or computers. The atmosphere is perfect for catching up on the news, doing some work or, more often than not, grabbing a few more minutes of sleep.

The Quiet Car policies are self-policed by riders. Despite the potential for an ugly confrontation, regular riders report that by and large, a simple reminder is all it takes. “People really try to be civil to each other,” Boenau says. “It might just be that the people who are talking don’t realize they are in the Quiet Car.”

Most riders are more than happy to help newbies learn the ropes of regular ridership, whether that be mastering the Quiet Car or the nuances of the schedules. Veterans know that MARC’s newer, double-deck cars feature comfortable seats equipped with power outlets but are about as temperate as Alaska in January. “The new cars are freezing!” Boenau says. That’s why even on a sweltering July morning, riders waiting for the trains from Point of Rocks had wraps or scarves on hand so they could bundle up once on board.

Temperatures aside, riders seem to share one particular beef about MARC’s Brunswick Line: its limited scheduling. Increased train frequency to Frederick County has long been a “chicken or egg” scenario, with the debate surrounding the question of what should come first: increase the schedule frequency to grow ridership or wait until ridership growth merits increased frequency?

According to data provided by the Maryland Transit Administration, MARC’s Monocacy branch accounts for approximately 4 percent of the Brunswick Line’s ridership, with the Frederick station averaging 140 boardings per day and the stop at Target averaging 258 during the past year.

Overall, ridership on the Brunswick Line has seen a 5 percent decline in boardings during the past five years. In 2018, there were 1,758,786 boardings, down from 1,850,718 boardings in 2014. But even at its peak, Brunswick Line ridership reflects a mere fraction of MARC’s total boardings. The MTA reports that ridership on MARC’s three lines (Penn, Camden and Brunswick) was 8.96 million in 2018.

Given those numbers, riders who pine for more frequent service to Frederick County may find themselves waiting for quite a while. And it may explain why MARC discontinued its Brunswick Line afternoon express train. “We mourn the loss of that train,” Berger says. With limited stops between D.C.’s Union Station and Frederick County, the trip shaved a precious few minutes off the evening commute. But a few minutes can mean a lot for parents racing to pick up their kids from daycare or running to catch their kids’ high school soccer games, as Berger often found himself trying to do.

MARC’s ridership data may also support efforts to find other options for commuters to get to and from Frederick County and D.C. The Maryland Board of Public Works recently voted to proceed with plans to build toll lanes on I-270 to help address congestion. It also approved a plan to study the feasibility of an elevated monorail that would run from Metro’s Shady Grove station to Frederick along the highway’s median.

The High Road Foundation, a Bethesda-based organization that advocates for investigating transportation alternatives, reports that today’s monorail systems can travel at up to 65 mph, which would certainly exceed the average speed on I-270 during rush hour. But as Seitzinger points out, the trip would require commuters to take Metro to Shady Grove and then transfer to the monorail. That means the length of their daily commute would not be significantly less than taking MARC direct to Frederick County.

With the Census Bureau reporting that Frederick was the fastest growing city in the Delaware-Maryland-Virginia region between 2017 and 2018, adding even more cars to I-270, for many commuters MARC’s Brunswick Line will continue to be the best, least-perfect option for making the 45-mile trip into D.C.

Just ask Stephen Daniels. As his MARC Brunswick Line train pulled into Union Station one morning, the former San Diego resident was suddenly joined by hundreds of MARC riders, including those from the Camden and Penn line trains. As Daniels and his fellow commuters plodded like a slow-moving oil slick along the crowded platforms, a fellow commuter asked him, “Can you imagine what the roads would be like if all these people drove their own cars to D.C.?” “Yes,” Daniels replied. “It’s called Southern California.”