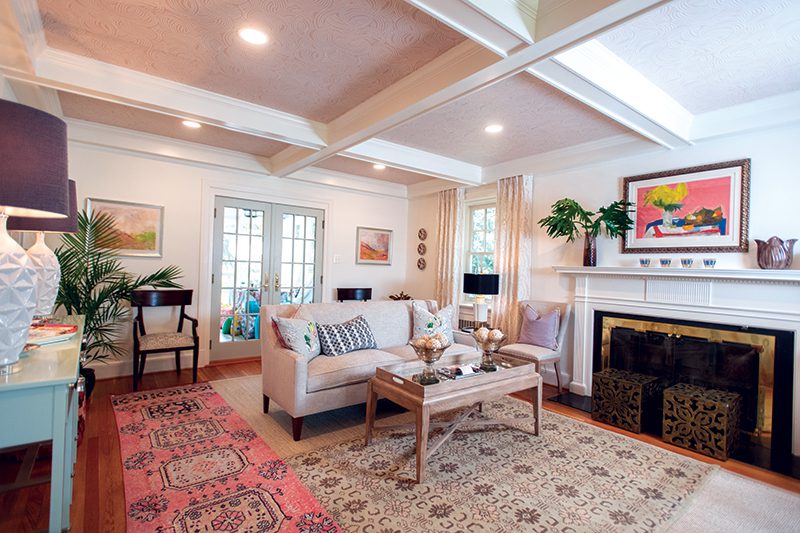 The thing that kept the nearly monochromatic palette in this year’s Frederick Design House from being “just ho-hum” was the generous application of texture—visual and tactile. That and the judicious pops of color in some rooms.

“It wasn’t planned that way,” says Theresa Gardiner, the event chair. “The designers all had their own vision for the rooms they decorated. It just turned out that they were all coordinated in their color choices.” The end result were rooms that flowed from one to the next, offering a sense of continuity to the house and its design vision.

From the hand-painted leaves on the foyer walls to the pyrite encrusted lamp in the master bedroom, the details are what made this an interesting stroll through a 70-year-old house next to Baker Park that was recently brought into the 21st century.

The visionaries behind the project were Gardiner and her husband, Doug, both real estate agents who were charmed by the bones of the house when it came on the market. Her immediate impression of the house was “how well cared for it was by the original owners. Everything was in pristine condition and only needed to be brought up to date.” As Realtors they knew that buyers do not want to live through renovations, and they do want a more open concept. “We took our time really figuring out the best way to remodel and still keep the character. We kept all the built-ins throughout,” Gardiner says.

“We widened the doorways to the living room and study from a single door to double the width and arched the opening to match the arch of the transom over the front door,” Gardiner adds. The kitchen was gutted down to the studs, part of a wall between the kitchen and morning room was removed, and the powder room was also completely upgraded.

Designer details of note on the main floor include: hand-painted gray leaf motif on the foyer walls continuing up the stairs; dramatic black-and-white geometric patterns on the draperies and area rug in the study; sunny coral accents in the fabrics and artwork in the living room; unifying backsplash tiles in the kitchen that continue around the room, and the concrete-finish quartz counters and island; the interplay of bamboo chairs, woven linens and patterned wallpaper in the morning room; and the brass accents in the powder room.

The second-floor renovations included removing a linen closet to give extra space to the master bathroom, still leaving two closets in the upper hallway for storage. “We gutted the master bathroom down to the studs and changed the layout to have a double vanity and an oversized shower,” Gardiner says.

In the previously unfinished attic, the door leading in was removed that created a half wall; designers then carved out a large room and added a full bathroom. “The floors up in the attic were red heart of pine so we refinished those in addition to the rest of the home’s hardwood floors,” Gardiner says.

Some of the noteworthy design elements upstairs include: bold gray-and-white stripes against soft solid color fabrics in the north bedroom; stunning black and white tile work in the bathroom, and the master shower of grout-less slabs of Corian; mirrors, elegant fringe, silk and velvet textures in the all-gray master bedroom; bright yellow accents to the several shades of gray in the third bedroom; fur, leather, metal, rattan and geometric prints in the attic room; and a “campsite” kid’s playroom space with a “forest” wall mural that makes you want to be that age again.

In the basement, designers added a wall to separate finished and unfinished areas. “We did a polished concrete floor, scored to look like large tiles and has a finish that looks like leather,” Gardiner says of the recreation area that’s a design departure from the rest of the house. Filled with mid-century, modern furniture, furnishings and accessories, it’s a time travel back to an era that’s enjoying a design renaissance with homeowners.

Organizers of the project did not have an architect rework the home because they felt that the design decisions were mostly cosmetic. “Doug and I made the renovation choices along with our contractor Ron Hemby of Hemby Custom Homes,” Gardiner says. For other parts of the project they consulted several professionals in the industry, as well. “For the kitchen and bathrooms, I chose cabinetry and surfaces in conjunction with The Kitchen Center and Designer Surfaces, and the master bath vanity was from Kitchen & Bath Shop,” she adds.

The back porch is a relaxing spot to wind down the day, and the Gardiners added a covered front porch over what was an open area, which “really made it fit in with the grand Baker Park homes,” she says. “It’s such a wonderful location because you face the park and not other houses. There’s always activity going on in the park and it’s peaceful to sit there and watch downtown Frederick life or a tennis match.”

According to Gardiner, the designers were wonderful to work with and the project, which benefited the Weinberg Center for the Arts, was a grand success, adding, “We hope to continue it either on an annual or every-other-year basis.”