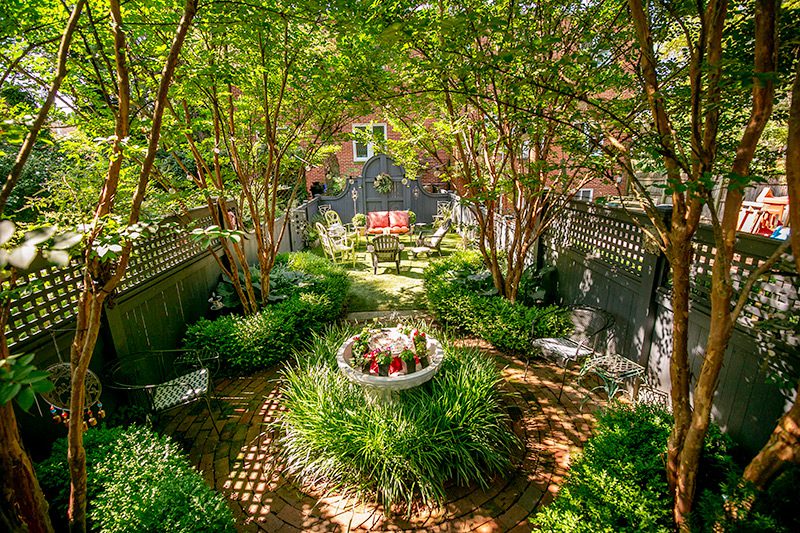 In Maryland, summer lingers. The transition of the seasons is not a quick, definitive flip of the calendar. Garden greenery stretches beautifully into September and beyond. Working in, walking through or taking a seat in a garden can slow the quick pace of life. Downtown Frederick, known for its restaurants, bars, shops and burgeoning night life, also has a petal-soft side. There are several pockets of well-cultivated landscapes and blooms, some on private property, some in public spaces. In these places, street noise is muted and the rush of life takes a back seat, or a park bench. Urban oases bring joy to those who maintain them and provide sanctuary to those who visit.

Ellen Pfeifer maintains a large, decorative garden at her bed and breakfast at 28 E. 3rd St. She bought the property a few years ago, mainly because the back yard reminded her of the prominent gardens she has seen throughout Charleston, S.C., where she had operated an inn before moving here. She says her guests find the garden to be an added bonus to a stay at her historic Downtown home. “Everybody likes it, including me,” says Pfeifer. “Had I not lived in Charleston, I don’t know if I would appreciate it as much as I do.”

Pfeifer points to the fountain and the circular brick pattern walkway that are reminiscent of landscape architect Loutrel Briggs, whose work is featured throughout Charleston. Her garden has four “rooms” filled with magnolias, crepemyrtles and lots of potted plants. She maintains the garden herself and encourages her guests to peruse the grounds. “They take a book and a libation and spend hours out there,” she says. Some people have held parties or wedding photo sessions in her garden and she says she’d like to offer it in a stand-alone capacity. She’s delighted to provide one more way for her guests to get away from it all to rest and relax. “It’s an oasis—an opportunity to detach from the hurry and scurry,” she says.

Another chance to detach awaits at Bonita Maas Park at 7 W. 2nd St., a pocket next to businesses and residences. It’s a small city park with a big message.

The Friends of the Child Advocacy Council, a volunteer, nonprofit organization dedicated to increasing awareness and prevention of child abuse and neglect, manages the park. Called a “healing garden,” it stands as a memorial to children who died from child abuse and is dedicated to the recovery of survivors. Some of the bricks in the walkway bear the names of children who died as a result of abuse. “There were multiple deaths due to child abuse in the community. We talked about what we could do and the garden was created,” says Patty McArdle, co-president of Friends of the CAC.

The group also installed a “whispering bench,” with a tube that allows even a whisper in one end to be heard at the other. “Every child deserves to be heard, even if they are whispering,” says McArdle.

There are dozens of potted plants, flowers, bushes and trees throughout the park and several benches. The group holds events there throughout the year. Volunteers also decorate with pinwheels, the symbol of child abuse prevention, during April, National Child Abuse Prevention Month. McArdle says, “It’s a place for people to go and have quiet reflection. People who have lost loved ones go there and they find comfort.”

Of course, the public is invited to use the park for other activities, too. Visitors enjoy sitting on benches just inside the decorative gates. Some organize photo shoots for weddings and other formal affairs.

When Lisha Utt works in the garden at All Saints Episcopal Church at 106 W. Church Street, she gets a feeling like no other. “It makes me feel really connected to the church and the people who came before me,” she says. Utt coordinates six volunteers who work throughout the year to keep the grounds beautiful and maintain the fountain and small pond.

According to Utt, some people who regularly walk the grounds refer to it as “All Saints Secret Garden.” It’s a space tucked between the streets and sidewalks that serves as a place of respite for those who work in it and visitors who take a moment as they walk on by.

During the week, the garden is a popular pass-through for busy folks moving between City Hall and the County Courthouse. The leaders of the church encourage the foot traffic. According to rector Rev. Adrien Dawson, the path provides more than convenience. It fosters love. “Our garden space is an opportunity to get [spiritual] nourishment and gives people a chance to remember that they are loved,” she says.

In addition to the beautiful greenery, flowers and the fish in the pond, the garden also features the church’s columbarium, where a number of visitors pay respect to deceased family members inurned there. Dawson says, “The visitors have a moment of living water and find peace.”

Utt and her team invite the rest of the congregation to join them to work in the garden at least once a year. She has been a gardener since childhood and says the act of caring for the plants is the best reward. “There is nothing like having your hands in the dirt,” she says.

Over on East Church Street, Evangelical Lutheran Church has a group of volunteers who maintain several gardens. Originally designed by master gardener Flo Thackston, the church grounds feature 21 sections with names like Garden of Angels, Garden of Hope, Meditation Garden and the Tranquility Garden. There are rose bushes, a 100-year-old elm tree, crepemyrtles, sculptures and a miniature replica of the church made of tin. The church’s columbarium is also located there.

Looking at the building at 31 E. Church St., you would never guess what’s behind it. In the garden, there is no noise and no indication that one is standing in the middle of Downtown, between East Church and East 2nd streets. Long-time church member Karen Smith is the caretaker. She and a group of volunteers take painstaking care of the grounds and welcome the public. Those who enjoy the space contribute, too. “Gifts come in from people in the community. Some people who don’t even belong to the church donate. God provides,” she says.

Smith and the rest of the congregation welcome all to the grounds. Downtown resident Julia Ferguson says she makes a point to walk through the grounds several times a week. “It’s my little respite on my way to work. It’s so lovely. The love shows,” she says.

Linda Moran’s garden at 29 E 2nd St. was designed by Stuart Haller, a prominent landscape architect in Frederick County in the early to mid-1900s. There are still original elements from his design on her property. In addition, there are dogwoods, boxwoods and several varieties of magnolias. “There’s a small circular plot of grass—no mowing needed,” she says. She does the upkeep and shares it with the community for garden tours and various fundraisers.

Moran says she can’t imagine not gardening. She and her husband created an urban garden grant at the Community Foundation of Frederick County to encourage others to create beautiful outdoor spaces. Her advice to gardeners is to plant in the right zone and in the right soil. “If you don’t, you can create environmental issues,” she says.

She says her garden is like a big palette. Every year there’s something different. And she takes the time to enjoy what she has planted and cultivated. “It’s very therapeutic. It’s a meditative space—a space to be creative.”

Homeowners Peter Brehm and Jack Day share their country-style garden at 318 W. College Terrace with friends and family. They maintain a wide variety of trees, bushes, flowers and even vegetables. It’s a garden that doesn’t take a vacation. “One of the things that we have strived to do is make it an all-year garden,” says Brehm. The grounds are alive with winter barks and trees, spring bulbs, summer flowers and fall greenery.

It’s a stylish and sweet-smelling place, featuring rose bushes, viburnum, sweet box and daphne. It also has a wide variety of trees, including magnolias, a Japanese snowbell, and a Venus dogwood. “We’re not slavish as it relates to native plants, but we try for pollinators,” Brehm says.

The garden features a brick walkway and patio and is an extension of the home’s living space. It provides a mixture of shade and sun and is a place of beauty and tranquility. Brehm and Day maintain and nurture the space. Brehm says they plant new things each year and wait for success, acknowledging that nature decides what springs forth and what doesn’t.

For those who want a structured tour of city gardens, Celebrate Frederick offers Beyond the Garden Gates, a spring tour of gardens that raises thousands of dollars for local garden clubs and beautification projects. The tour is a partnership of the Garden Club of Frederick, The Green-walled Garden Club, The Men’s Garden Club and Tasker’s Chance Garden Club. It was established 20 years ago and continues to grow in scope and popularity each year. This year the tour featured plein air artists working in the gardens of historic Downtown homes.

The Downtown Frederick Partnership also organizes the Flowers Over Frederick project. The organization works with groups and volunteers to purchase and place hanging baskets of flowers on main thoroughfares in the city. It’s a way to spruce up the streets so pedestrians and drivers can enjoy seasonal flowers and plants in summer and winter.

But the casual walker, bicyclist or Downtown worker on a lunch break may want to linger in a tranquil setting on any given day of the week in any season. As summer activities wind down and fall festivals begin, a handful of secret and not-so-secret gardens still bloom in Downtown Frederick. For those seeking to slow their pace, even for a few stolen moments, there are spots that are available to rest and replenish. If you get caught up in daily life and want to stop and smell the roses, there are plenty of them within reach.