Tip of the Hat 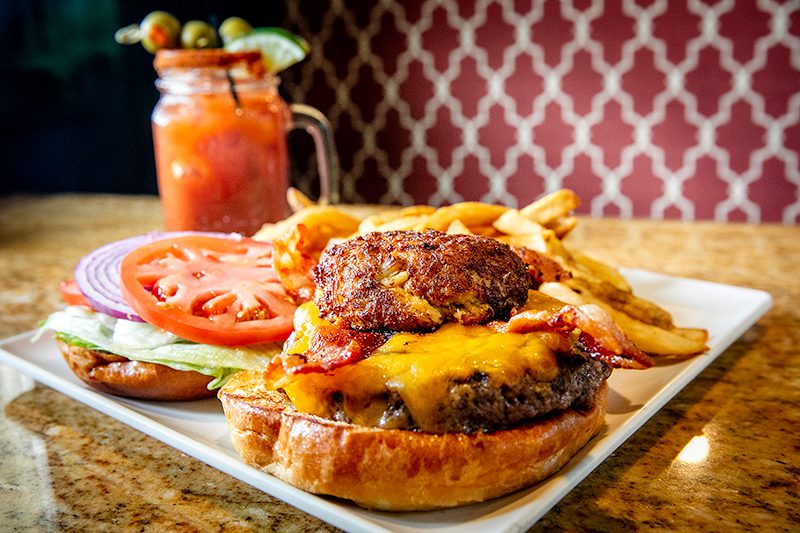 At the Derby Restaurant & Bar There is More than Ice Cream

Staci and Dan Caiola, the married duo behind The Derby Restaurant & Bar in New Market, take the concept of “ownership” to a higher level. It goes beyond real property and their graciously maintained historic location, feeding loyal customers made-to-order fare with fresh, regionally sourced ingredients with attention to detail. The stamp of ownership is evident from their scratch-baked desserts and hand-carved meats for loaded sandwiches to slow-simmered sauces, small-batch soups and proprietary coffee blend.

The pair met while attending the Culinary Institute of America, settling near Staci’s Howard County relatives following graduation. Within a few years, they took over the Olde Town Restaurant in Mount Airy, making the menu their own and building their skills as culinary professionals/ entrepreneurs during the last 12 years. They sold that first restaurant to focus on The Derby and its catering branch. Now cresting their first business anniversary here, the owners say they feel embraced by the community.

The Derby is a multifaceted mix of environs. Its curb appeal is respect-ably manicured and classically colonial. There’s casual dining in a bright, vault-ed space as counterpoint to a family-friendly pub area, separated by the kitchen. Out back is a colorful ice cream stand dishing up South Mountain Creamery favorites, Maryland-style snowballs and gourmet ice cream cookies from Nightingale Ice Cream Sandwiches of Richmond, Va. The backyard is filled with strings of lights, lawn games and picnic tables. There is outdoor seating on a sunny patio along the roadway and a covered deck behind.

The ice cream stand, which is cash only and open April to October, is a definite hit with families and stu-dents of the neighboring New Market schools, as are The Derby’s free movie nights, projected on a giant screen in the backyard. There are outdoor games like giant Jenga and Connect 4, cornhole and ring tosses. Families can bring a blanket and order off the inside menu to enjoy picnic style. The Caiolas hope to add a private party room above the bar this fall, pending town approval, to accommodate more team parties and events.

“We are big supporters of all the schools and sporting teams around here,” Dan says. He nods to a popular appetizer, Mozzarella Lancers, named in honor of the Linganore High School mascot. The dish features bites of mozzarella crusted with panko and skewered on a “lance” before being deep-fried. The crispy kabobs are served over house-made marinara sauce.

Diners also seem to like The Derby’s unique eggroll-of-the-day appetizers as much as chef Dan enjoys devising new fillings for them. He snagged the idea from a fellow vendor at a food truck event. “We change the recipe every couple of days,” he says, listing their most popular varieties: Reuben, pulled pork, pepperoni pizza and buffalo chicken. The two most in-demand versions are the crab cake eggroll and a beefy, cheesy version reminiscent of McDonald’s iconic Big Mac.

Dan’s conversations about the menu are peppered with the word “homemade” as he explains each recipe’s careful preparation. “Soups are homemade. All our sandwiches, subs and paninis are made to order with meats sliced in-house.” Staci, the resident baker, even churns out English muffins from scratch as a base for the indulgent Chesapeake Benedict. That is two crab cakes resting atop a soft split muffin with gently poached eggs and a sensuous wave of hollandaise. It’s dusted with Old Bay and served with home fries. Derby “Pop Tarts” are Staci’s nostalgic take on a childhood favorite.

Dan beams with a husband’s admiration, “Her homemade Pop Tarts are a big hit in the area. Many teachers at the schools could tell you, they probably all received one for Christmas from students.”

For the pizza station, the kitchen starts by making 50 pounds of dough each morning. Dan is adamant, “There is no premade crust here. We hand toss the dough, simmer our own sauce and shred big blocks of cheese in-house. We cut our own toppings. Everything is done daily to make it as fresh as poss-ible.” There is a gluten-free cauliflower crust and homemade white sauce. The top-selling crabby pizza is slathered with creamy crab dip, cheddar and mozzarella, then baked until molten.

Burgers are hefty half-pounders, cooked to order, and dressed with a choice of chili, grilled veggies, melting cheeses, indulgent egg or (more!) crab. As homage to Dan’s childhood home, the menu also features ground beef goodness in a Rochester Platter. This western New York specialty is inelegantly dubbed the “Garbage Plate” in its home state, as fans are apt to mix its components into a messy pile before eating. Here, the heaping combo comes with two four-ounce hamburger patties, fries and macaroni salad, all slathered with onions, mustard and a meaty hot sauce.

The bar and dining room share a kitchen, so the full menu is available in both areas. Diners can nosh on chicken wings and beer or loaded salads with house-made dressing and a side sip of icy sweet tea while their companions dig into stick-to-your-ribs steak, chops or seafood entrees paired with cocktails, all without limiting the options. On the plate, the 10-ounce cowboy-cut pork chop topped with apple chutney or rosy shrimp over velvety grits are consistent favorites.

In the glass, it’s orange/grapefruit crushes or an American Mule, made with Tito’s vodka, Gosling’s Ginger Beer and fresh lime juice. The Derby bar offers bottomless mimosas and bloody Mary’s for $16 every Sunday from 9 a.m. to 1 p.m., along with other weekday happy hours from 3 p.m. to 6 p.m.

Dan is quick to point out that their beer selection is an extension of the local brew lovefest. Favored brews from Olde Mother, Rockwell, Flying Dog, Idiom, Attaboy, Linganore Winecellars’ Red Shedman and Milkhouse Brewery at Stillpoint Farm feature prominently. Even the steam-ing java in their Irish coffee is locally blended and browned by Dublin Roasters, a Frederick Magazine“Best of Frederick” winner. Fans can sometimes find it on the coffee shop’s menu, too, but they can always find it at The Derby. It’s available for sale in one-pound bags, along with locally procured logoed mugs. “We are very proud of our coffee,” Dan says. “Dub-lin Roasters produces a proprietary blend just for us with three different coffee bean varieties. … We get deliveries weekly from them and South Mountain Creamery.”

The Derby will celebrate its first anniversary on Sept. 14 with specials and live music. The Caiolas try to host at least one fun activity every month, in addition to weekly live music and trivia nights. They are already planning a Halloween party, Thanksgiving-eve party and a Christmas-themed “funny” pajama party, along with a fall wine dinner.

“We are looking forward to the years to come,” Dan says. “We want to continue to grow and make this Derby the best we can. We want to be part of the New Market community.” He teases that he would consider a second location sometime down the road. “We hope this is our first step in the business.”